Impressive Brisket, Sausages at The Well 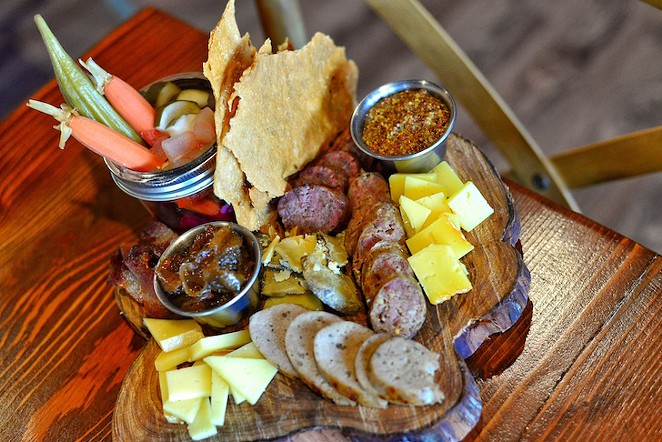 The Well is really more like a barn. An awkward looking barn set behind a vast parking lot that was mostly empty on two daytime visits. The restaurant/dancehall’s most appealing spaces are actually outdoors under some live oaks and atop a ground of Astroturf. There are picnic tables, a covered bandstand, ledges to sit at or lean on.

As the weather cools, this is the place to be. The dining spaces lack charm.

Charm of the Southern/Texas sort was apparently what the menu was aiming for. With their experience at Jason Dady operations, the two chef-partners should surely have been able to pull that off. King Ranch Chicken, pimento cheese, brisket, chicken fried steak, chili … where’s the mystery in all that? Mostly missing, as it turns out.

It’s not obvious that pimento cheese needs to be majorly fiddled with, but the kitchen gave it a shot, promising the smoke and spice of chipotle peppers. Not to worry: there is neither. What you do get is a coarsely grated rendition with perfectly fine pimento flavors, served with a cracker-like bread. It’s good with a local beer, but not better than your Aunt Mabel’s.

The house-made bratwurst is likely not better than your Uncle Fritz’s, but, grainy and lightly spiced, it does have an attitude of its own. As cheerfully served in a puffy, house-made pretzel bun with sauerkraut and house-made grainy mustard, the sausage tends to get a little lost, but you can always extract it. House-made, by the way, is a litany: “everything but the ketchup and mayo,” said one accommodating server. “These are Texas-sized portions,” intoned every waiter at one time or another.

I was hoping for a good, just-cheffy-enough rendition of chili worthy of Chili Queens in a town that has precious few good examples. Hopes dashed. We could start with the fine grind, which seems more like something one might put on a hot dog, and continue to the lack of any developed chile flavor, the over-reliance on cheese … In all, it’s perfectly edible, but, despite some good and custardy spoon bread, not worth the drive I made.

Maybe your Texas grandmother made King Ranch Chicken. This classic Texas recipe likely has as many variations as there are abuelas, but there are givens: cubed chicken, sautéed onion and bell pepper, Ro-Tel with chiles, torn corn tortillas, grated cheddar, often both cream of mushroom and cream of chicken soup, sometimes a little chili powder … it’s the ultimate potluck casserole. The Well’s version is supremely cheesy/gritsy, and though the flavors are okay, the chicken seems scant, the texture is mushy and unappealing, and the advertised “spicy sauce” mostly gets lost in the shuffle. Like the recent “Rocky Horror” remake, why do it if it’s not an improvement? This calls for sweetened iced tea. Spiked.

Any of us could do a decent brisket using a barrel cooker with an offset firebox — assuming we had the rub down pat. This is exactly the kind of “pit” The Well uses, and I didn’t expect more than ordinary out of the 3 Chili Rubbed Brisket. Wrong. Though it’s hard to say that the three chilis count for all that much, the meat is moist, the bark dark and crackling and the barbeque sauce oddly appealing with its undertone of tea. “All the fixin’s” in this case include some, yes, house-made rolls, vinegary cucumbers with dill, pickled chiles and a classic slaw that wasn’t mucked with much at all.

I felt obliged to get there on at least one evening when the Thursday-Saturday dance hall, oddly tucked away at the back of the complex, was open. Thursday is effectively UTSA night, and the lot was decently full. For my taste, the cocktails are a little overwrought, but the Fancy Free, one of the simplest (bourbon, maraschino, and orange bitters), was decently done, if oddly presented with a thick slab of bitter grapefruit peel. To go with it? House smoked beef jerky seemed natural. Oops — not available. But the substitute Texas Hot Link on a stick may have been about the best thing I had. Snappy, nicely seasoned, and presented with mustard and a boldly boozy onion compote, it sent me out in a Texas state of mind.