Italian eateries Arrosta and Allora are markedly different, but both have their charms 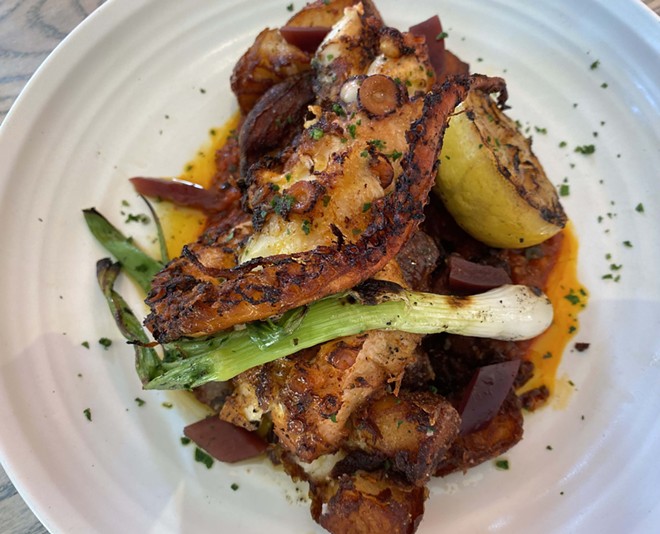 Arrosta, the more casual of two eateries, is housed in the squattier of the structures and helmed by Chris Carlson, most recently of Selig's Maverick Texas Bistro. Allora, the more upscale sibling, has taken up residence in the Oxbow Building and counts on the talents of peripatetic chef Robbie Nowlin, whose recent postings include not just San Antonio's Zinc and The Hotel Valencia but Napa Valley's revered French Laundry.

To build my dining visits to a crescendo worthy of an Italian opera, I started with Arrosta and its porchetta-stuffed ciabatta. Stewed bell peppers and melty provolone accompanied the roasted pork bracketed between appropriately crusty bread. It was a good sandwich and an even better introduction to the restaurant.

The menu's crushed fried potatoes with an abundance of green herbs and an almost-embarrassment of olive oil and salt made a good side. Don't order the bland and porridge-like polenta with mascarpone, however, unless you also have in mind a plate that comes with the arrestingly zingy salsa verde, which was great mixed into the polenta or dabbed onto the potatoes.

The menu's one other stuffed ciabatta takes a hollowed-out crusty roll and plumps it up with a trove of baby meatballs bathed in marinara. The combo is augmented by a slab of melted provolone and inundated with shaved parmesan. Served with excellent house-made potato chips, it's also a pretty good sandwich, if less complex than the porchetta.

Consider having the appealing broccolini salad as well, just be warned that it's more of a creamy potato salad with bacon (or maybe pancetta), red onion and walnuts that happens to boast some branches of broccolini. Less successful was the panzanella salad, in which the bread component didn't get enough time to marinate in the dressing.

A quarter "crispy and juicy" — and also herby — roasted chicken is one of only two carne arrostite offerings on the slender menu, and it lives up to its description, especially when anointed with that aromatic salsa verde.

I didn't try any of the salads, in part because none really appealed. I also wasn't impressed by the cold panini offerings that included a Louisiana-Italian "muffaleta" (sic). My first impression was that there's not enough of interest on this menu to bring me back in spite of generally good execution.

With one exception, however. And that's the exquisitely simple affogato, a brilliant blending of near-bitter hot espresso and creamy gelato. As an afternoon indulgence, it's Italy in a small but potent glass. Especially if paired with a donut-like bombolino filled with limoncello cream.

As befits sister restaurant Allora's larger footprint and fancier finish-out, complete with Tuscan tones, its menu is also substantially more complex. Among the antipasti, a standout offering was the popular Spanish tapa of silvery boquerones, or white anchovies, served on bruschetta with a vibrant pistachio pesto. Even if you claim to be an anchovy antagonist, give these a try.

Playing Italian Baroque to the anchovies' pristine classicism was the olive-brined grilled octopus, an aggressively chargrilled tangle of tentacles enlivened with a chunky romesco sauce and augmented by a cohort of crispy, small potatoes. It was impressive and irresistible.

Sashimi cohabits with Italian and Mexican influences on the menu's compelling "crudi" selections. Although we only tried the impeccably fresh sea bass served with a pistachio pesto, olive oil and a hint of mint, it was refreshingly unfussy. The culturally curious might want to give the fluke tartare a try. It's prepared in an aguachile style and served with cubed parmesan panna cotta, no less.

Based on the first courses we sampled, a case could be made for simply ordering a selection of pastas and a bottle of rustic, Italian red such as the brilliant Surrau from Sardinia or the earthy Graci from the slopes of Sicily's Mount Etna and calling it a day.

Orecchiette with pistachio pesto, a recurring motif, were bright and light. However, "Ravioli alla Amatriciana" (sic — for the fastidious, Italian orthography doesn't appear to be Allora's thing) was weighed down by a colorful but dense spinach filling even though the silky pasta offered redemption. Tagliatelle alla Bolognese in Bianco featured not only beautiful, broad pasta but also an admirably restrained meat sauce with white wine and carrots. No tomato needed.

Allora calls itself "coastal Italian," yet the seafood secondi proved universally disappointing. At an earlier visit, the swordfish emerged overcooked, under-seasoned and unsalvaged by a black lime tomato sauce. More recently, flounder with whole hazelnuts and brown butter was properly cooked but essentially tasteless. The mussels were merely adequate despite their bath in white wine with preserved lemon.

Now off the menu, a bold rabbit leg confit with smoked white beans was an early favorite, standing in sharp contrast to the seafood. A bone-in pork chop with cipollini onions ran a distant second.

Wherever onions appeared on the menu, they were excellent, but nowhere more so than with the charred — right up to the edge of incinerated, actually — cauliflower served with a jammy onion confit studded with wine-marinated sultana raisins. Continuing with the side dishes, fried chickpeas came with more cipollini and a bold amatriciana sauce larded with guanciale, or maybe pancetta. And crispy potatoes with espelette pepper flakes and balsamic butter could be ordered by the bucketful.

No room for dessert after all this? Maybe just a piccolo pistachico gelato — there's that nut again — with a modest shortbread cookie. How bad can that be?

Note to early-evening diners: Though not easy to escape, the western sun blasts the space from around 6 p.m. to near sunset. Try for a seat out of the glare, or pack sunglasses as some diners did.

Best bets: Arrosta is the casual, morning to mid-afternoon sorella to fancier Allora. Check it out for simple breakfast offerings along with lunchtime stuffed sandwiches, platters with roasted pork or chicken, sides such as crushed fried potatoes or broccolini potato salad, or the leafier Artisanal Salad. The stuffed ciabatta with meatballs or porchetta, roasted chicken, crushed fried potatoes and affogato all warrant a try.

Best bets: Allora boasts Italian coastal cuisine in a Tuscan-toned setting with an olive-brined roasted octopus as the best of the lot. Smaller plates such as boquerones and striped bass with pistachio and mint were also standouts. Pastas prevail in small-plate form, too. Try the spinach-stuffed ravioli amatriciana, the excellent pistachio pesto-adorned orecchiette or the equally satisfying tagliatelle in Bolognese bianco sauce. Don't forget to check out side dishes such as the baroquely adorned roasted cauliflower. Excellent Italian wines dominate the list.