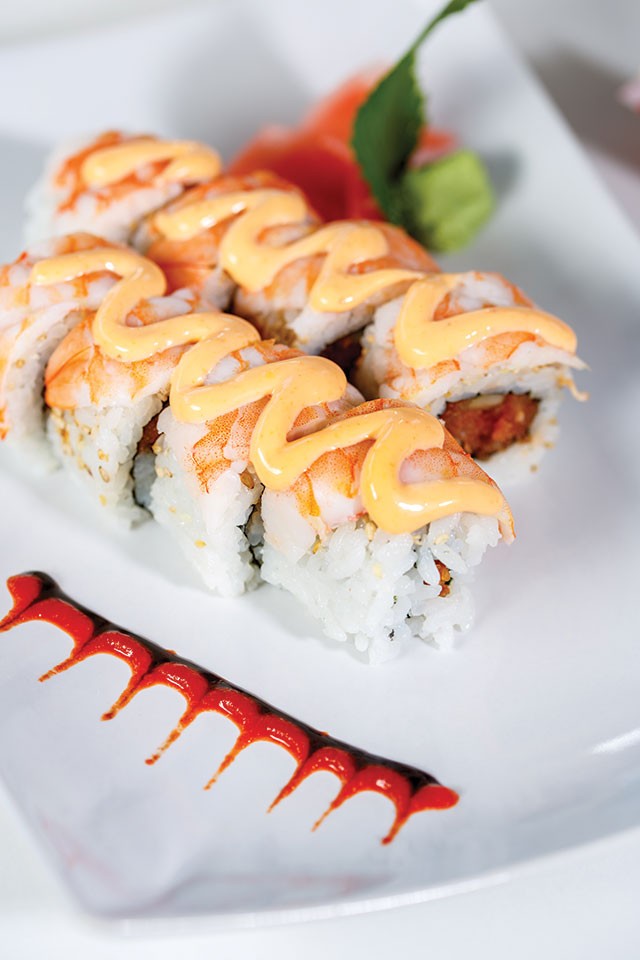 Casey Howell
This tiger roll has some bite

There’s something hopeful about the opening of a restaurant—new business, new life, new flavors, new favorite dishes. But for Downtown denizens who have seen two restaurants come and go in the space once occupied by beloved Twin Sister’s Café & Bakery, that sunny optimism might have turned into gloomy apathy.

To understand our trepidation about the latest Twin Sisters successor, Kawashi Sushi, we have to review the last two attempts—Taste Crepes & More and Vinny’s Donuts. The former was an expansion attempt by owners Carlos Ibarra and Alberto Cueva, who still own the original location at The Rim Shopping Center. After opening in mid-2012, Taste Crepes fell flat about a year later. Then, in late 2013, Vinny Pharakhone announced the opening of Vinny’s Donuts with a simple sign on the door. Vinny’s opened in late January serving a plethora of baked goodies, breakfast sandwiches and bubble tea.

Didn’t get a chance to try the pillowy donuts within the shop’s four-month lifespan? Tough.

By late March, Pharakhone and co. had ditched donuts in favor of sushi. Is San Antonio not a donut town? Do we hate fresh-made bear claws? Did the breakfast taco lobby bully Vinny into switching gears? Regardless of what the reasons were, Kawashi opened in June, and now at least the bubble tea makes more sense.

Aesthetically, the space has always been easily manipulated. A quick paint job, a few bamboo reeds, a sushi counter and a privacy screen turned Vinny’s into Kawashi in the blink of an eye. We stopped in for our first visit for a late lunch. Service was speedy, but then again, there weren’t a whole lot of lunch-going folks there to distract our server. Lunch specials, served 11 a.m. to 3 p.m., offer the standard collection of dishes: chicken, beef and salmon teriyaki plates, shrimp tempura and chicken entrees served up in sesame, sweet and sour, and lemon form. Four sushi combos, all $9.95, are also available with the usual mix and match rolls of California, nigiri, spicy tuna, spicy salmon, Philly, shrimp tempura and spicy crab.

Apart from the lunch specials, the menu as a whole wasn’t too mind-blowing either with sections for nigiri, vegetable rolls, special rolls, fried rolls, hand rolls and sashimi. Noodles are offered, specifically three takes on udon soup, and there’s a selection of stir-fried dishes.

A pleasant house miso was delivered in advance of the lunch entree with several cubes of silk tofu to tide me over. Soon after hot and freshly fried sesame chicken was dropped off. The offering was good—not great—and the crunchy chunks of breaded chicken held up to the sweet sauce well. I could have used a few more broccoli florets, and I’m ambivalent about the addition of thin carrot strips that limply added some color.

The dragon roll with barbecued eel (unagi) and cucumbers topped with avocado slices, masago (fish eggs) and eel sauce, was overwhelmed by the too-sweet eel sauce. A bummer for unagi fans.

Our second visit started with an order of fried tofu satay, an impressive appetizer with lightly fried soft tofu and a pleasantly surprising peanut dipping sauce. My partner’s crab asparagus soup continued the trend with its fresh, crisp asparagus pieces.

The sushi selection this time around fared slightly better with the tiger roll and amigo roll. The former succeeded with adequate heat and creamy spicy mayo, while the latter, made with shrimp, crab, avocado, masago and sweet mayonnaise, left our palates befuddled.

Edible, yes—surprisingly so for an inexpensive Downtown lunch spot—but will Kawashi last? While far from the best sushi available in the city, it does get the job done … that is if the job is quieting a quick raw fish craving. Kawashi Sushi has to go further to win over Downtown workers and residents alike or else go the way of its predecessors. If it can’t survive, maybe we should give Vinny’s Donuts another shot.