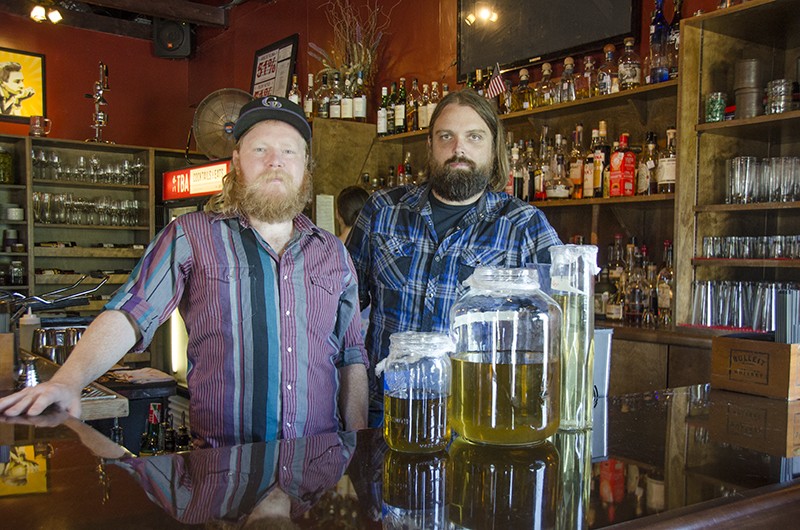 There are many potions, lotions and libations that thrive on the notion of secrecy. Skipping over snake oil and hair restoration tonics, one such elixir is the estimable liqueur labeled Chartreuse. Said to be in production since 1737, this product of French Carthusian monks is alleged to employ 130 herbs, plants and flowers in its production.

The brothers in arms who have produced an uncannily evocative San Antonio version (SAtreuse?) of the pricey spirit are not the least bit bound by constraints of silence. Jacob Burris and Josh Brock, bartenders respectively at Stay Golden and TBA, are more than willing to share the secrets of the potion they put together for a recent Harvest Feast at Hot Wells.

"I first thought I'd make something from the fruits growing at Hot Wells," Burris told the San Antonio Current. "But I quickly realized that Justin [Parr, the property's multi-talented caretaker/muse] had even more herbs. So I decided to make things more difficult for myself and do an herbal infusion [as the basis for our drink that night]." Burris, Brock and I talked at TBA, on the corner of whose bar a tableau vivant of the herbs used is displayed. I'm encouraged to take a bite of the fennel blossoms that provided a major flavor component. Other delights: thyme, sage, both spearmint and peppermint, Thai and lemon basil (leaves and flowers), lemon verbena, dill blossoms, rosemary.

"It was all based on aromatics," said Burris. "We put everything together in a mixing bowl and kept sniffing until we had a scent we agreed on." And in fact, they did a different blend the next day and merged the two. "We put it all together in a blender with a little Texas honey to keep the Texas theme going," said Brock. "It was an 'expedited maceration process.'" Of the result, said Burris, "Oh shit, we accidentally made Chartruese — in one and a half days!" Cheap vodka was the base of the herbal potion.

At the eponymous Last Word on Houston, Jeret Peña's rendition uses an extra-aged Chartreuse and the price reflects its rarity. For the Hot Wells event, Burris and Brock concocted a drink they called "The Laster Word," for which they also "hot-wired" their own "jail maraschino" liqueur, an essential component, out of house-made grenadine and maraschino syrup. The result was impressive and my taste of some of the very last of the base infusion was equally rewarding. With time, the aroma became more tea-like but the flavor retained its herbal complexity.

The innovation isn't stopping there. Also on the counter was a starter palette of what they are thinking of as a seasonal, summer potion: sunflower blossoms and sprouts, sunchokes, saffron ... the blend will likely evolve. "We don't ever want to be a cocktail Olive Garden," said Brock. Got it. "And we think we have lit some other people's fires," added Burris. Got that, too.