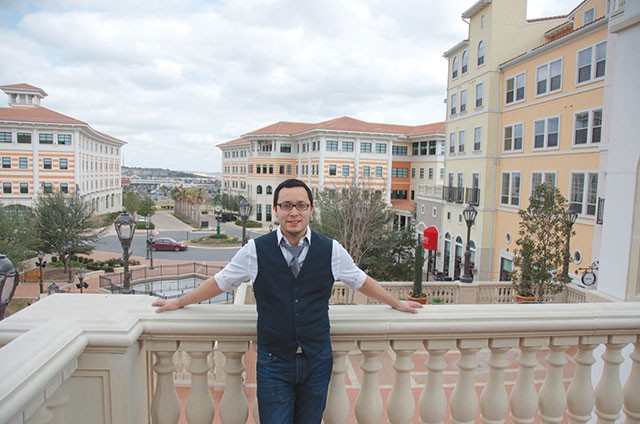 Trying to get a hold of bartenders is tough. It’s especially trying when said bartender is in the process of opening the latest cocktail bar to hit San Antonio. Steven Raul Martín (formerly of Esquire, Brooklynite and NAO) helms George’s Keep along with co-bar manager Johnny Bernal of the Green Lantern. We talked to Martín, architect and bartender, about how he combines his two loves and what folks should expect of the noteworthy space.

How are both your crafts similar?
There’s a science and an art to both. It’s also a service, being able to do something for someone and seeing them enjoy it. I’ve designed a few homes where the couple has been saving up for something for years and I’m responsible for designing a house they’ll live in—theoretically—for the rest of their lives. There’s something so satisfying about applying knowledge and skill to a great service and seeing that end result. The same can be said for bartending and having a focus on cocktails. You gauge the customers … and try to make what they like …. There’s nothing better than seeing someone’s eyes widen after they take that first sip.

What part did you play in designing the bar?
One thing I stress is that this is all [owner] Steve [Mahoney]’s idea. He first took me to the bar last April and it was basically a storage room for the hotel. It wasn’t meant to be a lease space at all. What I stressed was the functionality behind the bar. It had to be as functional as possible for us back there, while being aesthetically pleasing. The finishes are all Courtney & Company (an interior design group); they did an awesome job on the wallpaper, fixtures, the lighting.

Is there a concept behind your bar program?
Not really. It’s not my bar program. It’s not Johnny’s. It’s everyone’s bar program. It’s a collective effort where everyone [Bernal and Martín have amassed a staff of 12 including several ‘tenders from Green Lantern, plus Dorcol’s Nick Kenna and NAO’s Tim Bryand on a part-time basis] adds an equal contribution. We want to create the strongest menu possible with our collective efforts that utilizes everyone’s talents and ideas, while finding what works for our customer base.

Let’s talk about your customer base…
In describing the bar and talking about what we’re doing, I’ve noticed there have been a lot of people that travel inside the loop to places like Blue Box to get a good cocktail. I’ve met a lot of them. They usually don’t have another option but to choose from the usual. It’s just a matter of what they’re given and most welcome the opportunity to have a place that uses amari (an Italian herbal liqueur), vermouths and deep, dark, robust spirits, and [has] a focus on a more classic approach to bartending. There are people all over the city that have an appreciation for it, and it’s cool to provide that.

Is there any particular spirit you’re a fan of?
I like amari. I love Gran Classico, Campari, Aperol, Cynar; there are two drinks we’ll start making when we expand the menu downstairs that will include these. Everyone’s preferences are different, but I love a bitter, rich amari. I always have and always will.