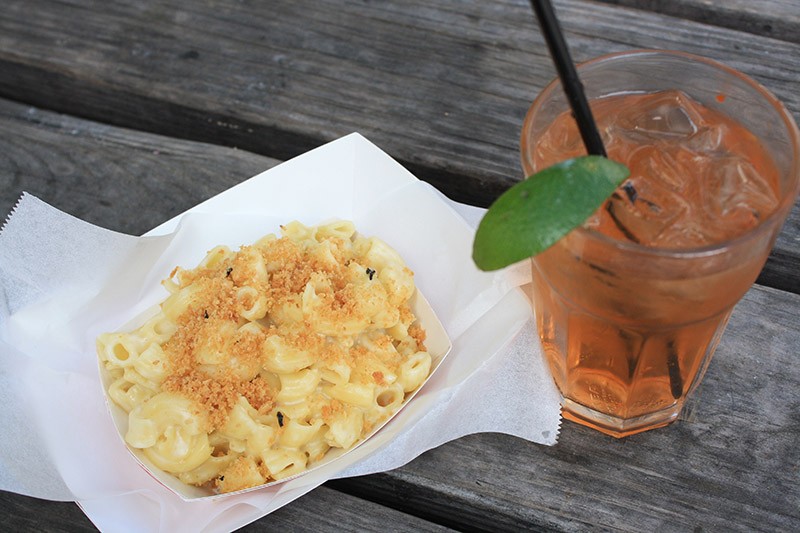 Sarah Flood-Baumann
Looking for something other than tacos for late night grub? How about some Southern comfort food?

It's late, and you need something to fill your belly after one too many beers. Other than hitting up the same ol' taco joint or staying home and firing up the stove (or microwave), the post-bar cuisine options in San Anto are limited. This isn't a knock on the Chacho's, Las Salsas or Los Robertos that dot the area, and I would be remiss if I didn't admit to chowing down on Los Regios when the mood strikes, but certain nights call for something different. 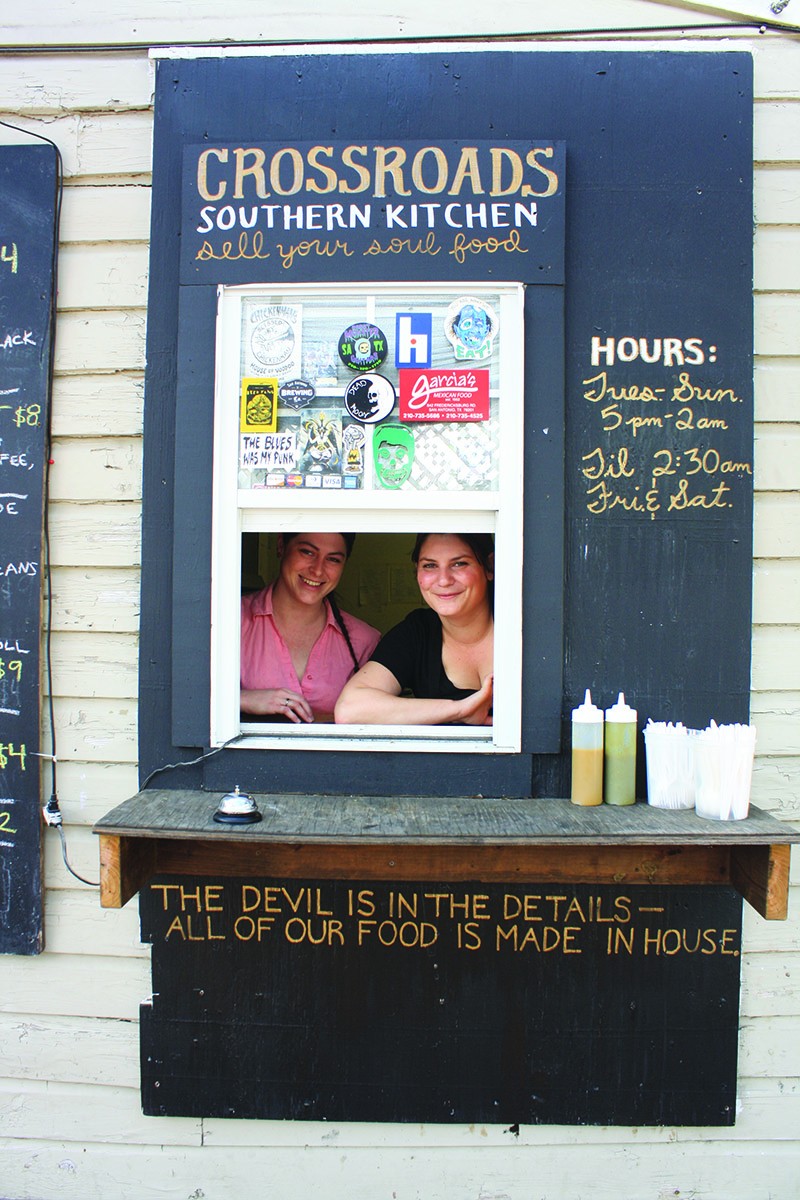 How does fried pickled okra sound? Or how about a "ridiculous chicken biscuit" that's not wrapped in bright yellow paper wrappers? Veggie-seekers — wouldn't a seitan-sausage with red beans and celery relish really hit the spot after a few cocktails?

The kitchen first opened in May, replacing the pizza by-the-slice concept Faust had initially tried getting off the ground. After meeting chef Drew Morros at a pop-up dinner, Faust owner Danny Delgado offered her the space to work her magic.

Morros, a native of Charleston, South Carolina, had been in San Antonio for five years at that point. The 29-year-old fan of homesteading first worked at The Cove under Mike Sohocki, where she took charge of adding vegan and vegetarian menu items such as the vegan burger and Mexican lentil stew, before transitioning into a catering manager role.

"They were great about helping develop my skills," Morros said of owners Lisa and Sam Asvestas, who paid for butchering classes and a weekend hunting trip with Jesse Griffiths of Austin's Dai Due. She then moved over to Restaurant Gwendolyn, and helped run Sohocki's farmers market operations and charcuterie prep.

Morros (wo)mans the tiny 15-by-10-foot kitchen with childhood friend Roberta Marques who joined her in San Antonio two years ago. Of the three major menu board changes in the last 10 months, Morros believes her current one is also her strongest offering. By now, the food has amassed a solid following, so favorites have started bubbling up to the surface and staying on top. The fried pickled okra, for one, is an obvious bar snack, but the smoked mozzarella mac 'n' cheese isn't going anywhere anytime soon.

The recipes come via Morros, who sees homesteading and Southern eats as going hand-in-hand. Her day-to-day consists of getting into the kitchen at around 1 p.m. to start making biscuits from scratch. Though sales from food industry insiders and bar-goers make the bulk of her revenue, "we have a window from 1:50 to 2:30 a.m.," a happy hour crowd of professionals and teachers who keep her busy in the evenings.

Again, it's the menu that sets Crossroads apart from the rest. There's a sweet pea salad of sweet peas, sugar peas and black-eyed peas on romaine, drizzled with a mint dressing and dotted with crunchy biscuit croutons, added as a way to make eaters feel better about taking down a meatloaf sandwich this winter. Though the salad is textured, light and one of the best this writer has had in the city, diners can't help but linger on the ridiculous chicken. Served between a homemade bun as a sandwich or over the scratch biscuits and covered with red-eye gravy infused with coffee and bourbon, the fried chicken should not be missed.

Vegetarians don't have to miss out on the Southern fare — Morros can relate to their plight. "I'd been a vegetarian for a long time and I worked at places that allowed that, but when I moved to Texas, I figured I should start eating meat," Morros said.

"I think people are just excited to have a vegetarian option," she continued. "They don't have to go to a vegetarian restaurant. They can just sit down with their friends and eat."

Though the wait time is often longer than it would be at your local late night taco joint, Crossroads is worth it. You won't leave wishing you hadn't eaten that pulled pork sandwich or masterful mac.

Crossroads nights are numbered as Morros and Delgado head to 318 Martinez Street this summer for the opening of Lowcountry, a concept she says will be totally different.

"It's going to be very quiet, Blues-oriented and chilled-out," she said. "It'll be a much nicer take on our food, where you can go eat some nice chicken livers with a good whiskey."

It'll be Southern comfort, without reaching for the Jim Beam.