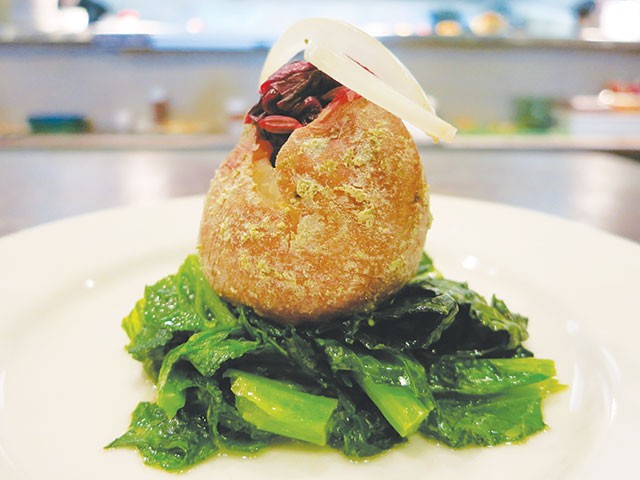 Chef Mike Behrend’s goal for Meatopia is clear: “I want people to leave saying, ‘The best thing I ate at Meatopia was the vegetarian dish.’” Behrend of Green Vegetarian Cuisine will be the resident vegetarian among 32 chefs participating in the meat-centric culinary event.

For the Meatopia event on Sunday, November 3, Behrend will prepare around 1,000 servings of a vegetarian dish, which to be clear, is not a side-item. “We believe that veggies belong at the center of the plate,” said the chef, who has been a vegetarian since 2005. “We want show people that you don’t have to have meat to eat a great, well-balanced meal.”

Behrend’s contribution to the feast will be a salt-crusted new potato dish. He boils them in a shallow bath of herbed salt water until all liquid has evaporated, leaving the potatoes tender inside with a crisp and salty exterior. They sit on a bed of kale and Swiss chard salad, topped with fennel seed-laden, pickled radicchio. Slices of pickled, pecan wood-smoked onion balance on the deep red radicchio, lending a delicious barbecue flavor to the vertical assembly.

Behrend and his mother, Luann Singleton, owned and operated Lulu’s Bakery and Café for 15 years. They sold the restaurant in 2006 to begin construction on Green. Behrend cited health, environmental and animal treatment concerns as reasons for his personal switch to a plant-based diet.

When planning for the opening of Green, Behrend “thought that the restaurants could be part of the solution instead of part of the problem.” Between two locations, his establishment serves 25,000 kosher and vegetarian meals a month.

As for cooking in the midst of an admittedly carnivorous crowd?

“I really don’t have a problem with people eating meat, but we want people to eat more veggies and less meat,” Behrend said. “We’re not trying to convert the whole world to vegetarians—although it would be nice.”