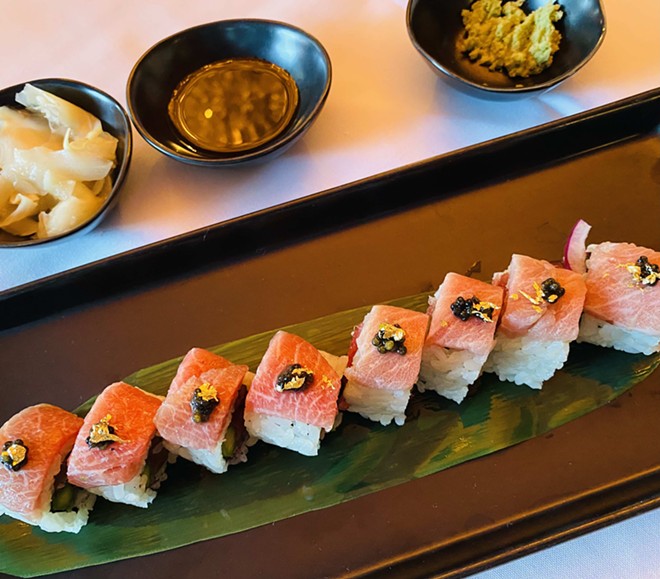 Ron Bechtol
Gold foil and caviar appear multiple places on the Up Scale menu, including on this sushi roll.

With successful dining spots Little Em's and Up Scale under their belts and two more — Go Fish Market and Restaurant Claudine — coming in short order, restaurateurs Emily and Houston Carpenter seem to have the Midas touch.

However, it's only at Southtown staple Up Scale that the metaphor is physically manifest. Starting with the deviled eggs, expect glints of real gold.

In the eyes of most, deviled eggs would be decidedly more down- than upscale in concept — especially in an environment as pink and plush as this much-changed former location of Feast. But greatness, as we know, is in the details: here they're presented not just with tiny mounds of caviar but also with artful scatterings of gold flakes.

The eggs themselves are as unpretentious as your grandmother's — except for a pungent whiff of white truffle oil that, thankfully, doesn't dominate the taste. The caviar, a California farm-raided product bearing chef Thomas Keller's name, provides a hint of brininess but not the expected textural pop. And the gold flakes? Purely visual. Not to mention likely justification for charging $17 for three tricked-out halves.

Gold rains again upon the Up Scale roll, sushi being a somewhat odd, but not necessarily unwelcome, component of Up Scale's menu. The rice is threaded through with a core of snappy asparagus, draped in tuna and adorned with dots of more caviar and the glimmering foil. Again, the gold adds nothing but glam and glitz, but the package is otherwise less opulently excessive than many other rolls around town. It only wants the merest hint of the available wasabi, and the $20 tariff seems almost justified.

Seafood dominates the menu even more now than it did when Up Scale opened last October, although the options do include a 32-ounce tomahawk steak listed at $140 — with no gold flakes.

Apart from a New York strip, the only other meat on the current menu is considered an appetizer: Texas lollipop lamb chops. But before you ask, there are four of the diminutive beauties to a $46 serving, and they are expertly grilled, deftly seasoned and presented with a scintillating citrus-spiked feta sauce. Add an Up Scale Caesar, a bottle of red wine such as the earthy E. Guigal-Saint Joseph, and you'd have a satisfying meal.

Or you could go for the equally expert seafood. Lobster tagliolini with sauce américaine and our old friend caviar was the pasta iteration on this visit. Though crowned with a handsome piece of claw meat, the dish seemed visually skimpy, a problem just a little more pasta would correct. But the tomato-based sauce with cream and brandy was appropriately unctuous. In this case, the caviar was more than mere garnish; it helped loft the pasta into the realm of genuine luxury. 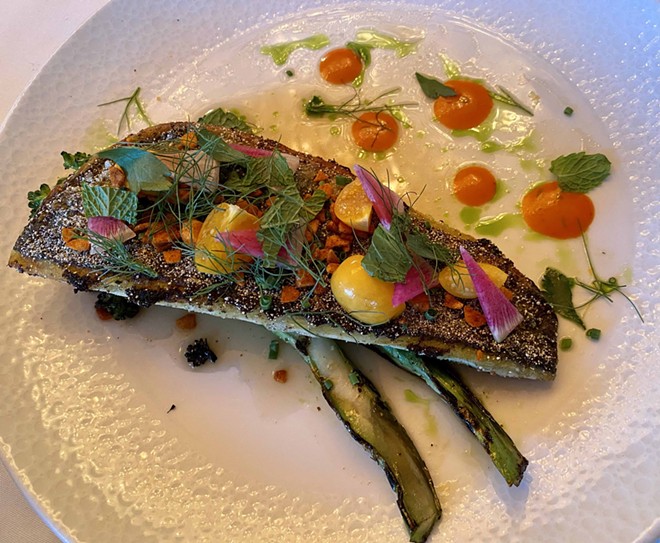 Ron Bechtol
Up Scale’s half branzino is an elegantly executed plate where every component works in concert.

The pandemic has been at least partially responsible for diminishing diners' service expectations, but Up Scale seems to attract staff with a degree of polish. Our server did a convincing job of deboning sole meunière tableside, then served it up handsomely sauced on a bed of buttery farro inflected with foie gras. Apart from added richness, the foie was hard to detect, but there was no denying the assertiveness of a lemon verbena beurre blanc heavily accented with fenugreek. Meunière is traditionally little more than lemon, butter and capers, a suitably sotto voce companion to delicate sole. This sauce, though excellent, was a screamer, perhaps better suited to a veal chop.

A crisp-skinned and herb-scattered half branzino perched atop some of the best broccolini ever encountered helped restore balance, however. The fish was nicely charred, beautifully textured and blessed with a citrusy heat. On this plate, everything worked. Even our bottle of carricante white blend from Sicily's Mount Etna stood up to the task. We could have stopped right here.

And perhaps should have. A shared order of chocolate sponge cake wrapped in a chocolate ganache and accessorized with macadamia nuts and torched meringue sounded good. However, it failed to deliver much in the way of an opulent ending suitable to the surroundings and service.

Just the same, it gave us a moment to ponder the value received for a tab north of $500 — including tip, three cocktails and two bottles of moderately priced wine — for three diners. Worth it? If you want to feel like a VIP for an evening, all the while enjoying some reasonably rarefied food and drink, maybe so. It's your call.

The skinny: Kid number two in the soon-to be quartet of restaurants spawned by power couple Emily and Houston Carpenter, Up Scale occupies the former Feast space across South Alamo Street from the first-born Little Em's. Be warned: Up Scale takes both decor and price point up a notch or two from its predecessor in the space. Maybe three. The menu begins with sushi choices, then morphs into a sort of seafood house with token meat selections and superfluous, but fun, scatterings of gold flakes — often with mini-mounds of domestic caviar. The lollipop lamb chops are worth the fare, and seafood dishes shine. Maybe skip dessert.