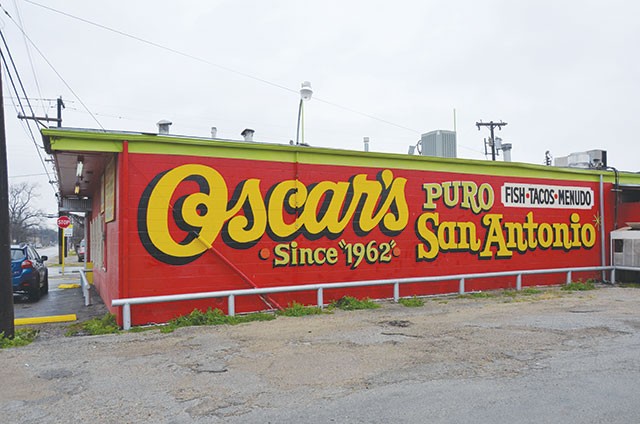 Jessica Elizarraras
Keeping it puro on the South Side

The thing about being a published writer is that you have to keep your word, especially when it’s in print. Back in December when we compiled our magazine-wide New Year resolutions for the city and ourselves, I decided to venture outside my central San Antonio comfort zone. In an effort to stick with my resolutions, I sought the help of food blogger and Rackspace “racker” bee, Garrett Heath.

Heath, a 30-something from Lubbock, began the blog An Average Joe in San Antonio in 2009 (now SA Flavor, unrelated to our San Antonio Current Flavor blog) as a way to show his friends back home the culinary secrets he was discovering in his new city. I sought the help of this 6-foot, green-eyed gringo (his words, not mine) because of his unwavering food wanderlust. Heath’s method of getting to know the city when he moved to San Antonio nine years ago meant going deep into its nooks and crannies, at times getting lost in San Antonio’s loopy roadways (while using a foldout plastic map his mother had gifted him) and visiting landmark restaurants.

With Heath as my guide (my sherpa, if you will), we made plans to visit his two favorite Southside joints.

Our first visit was to Oscar’s Taco House, a multi-colored edifice at the corner of Barrett Place and South Zarzamora, for lunch. Established in 1962, Oscar’s first began as an icehouse, later adding carhop service—which is still available today. Cops and tables of abuelitas filled the restaurant as affable and efficient staff members buzzed around carrying large plates of signature puffy tacos, mounds of fried fish and chili-topped enchiladas. History seeped from the building in a quaint way, as beer signs lined the walls and paper Valentine’s Day decorations hung from the ceilings. I followed Heath’s lead and ordered a No. 2 from the long laminated menu. Some five minutes later, our plates of one beef puffy taco, one cheese enchilada, one tamal topped with chili, one chalupa, rice and beans made it to the table.

We hurriedly chowed down on our tacos, which were sturdier than Heath alluded to. I would give them at least a full minute. The rest of the meal was equally solid, if daunting. The all-meat chili draped over both the enchiladas and the tamal was spicy, but the addition of a DayGlo orange salsa really turned things up a notch. While the staff is pretty tightlipped about the chiles used, Heath and I guessed there’s a good amount of guajillo and habanero peppers involved.

Conversation turned to why people unfamiliar with the area might stay away.

“So many people are interested in what’s happening now, what’s new … [Oscar’s is] more established,” Heath suggested. There’s not a whole lot new about a restaurant that’s been around since 1962, but it can’t remain a well-kept secret either.

After trying our best to polish off the No. 2 (funnily enough, the No. 1 is billed the Sleeper), we paid our insanely low tab of $8.62 each and made our way back to our respective offices.

Stop numero dos was a well-worth-it excursion down highway 90 to Tellez Tamales & Barbacoa off South General McMullen. I’d heard whispers of Tellez, which has a satellite location in Leon Valley, for the better part of two years. As recently as 2013, the tamal factory was voted second best in the Current’s annual Best Of list.

“I found this place, and when I told my old co-workers about it, I pronounced it ‘teles,’” Heath laughed. Non-Spanish speakers, learn from this gringo’s mistake: It’s pronounced ‘teyez.’

Set up as a cafeteria-style taco place, Tellez has a very matter-of-fact feel to it. I suppose you’d have to if you had tamal-hungry San Antonians lining up at midnight on Christmas Eve to pick up orders. (“I had never heard of tamales at Christmas until we moved here,” Heath said.) With 30 years in the business, the process has turned into a science. I understood the mass appeal the second I bit into the spicy pork tamales.

My barbacoa taco (I went the “all-meat” route, as the other option sounded bit too Bizarre Foods for 7 a.m.) was tender and hefty. A zippy green salsa helped tie it all together. Lunch plates are available daily along with menudo, but remember, Tellez closes promptly at 2 p.m.

While downing self-serve coffee out of plain Styrofoam cups, Heath suggested looking to technology to get out of dining ruts.

“Sometimes what you can do is as simple as getting an app like UrbanSpoon which locks into a particular location,” Heath said.

While eating and exploring go hand-in-hand for Heath, he also weighs ambience and history when deciding whether to return to a restaurant, adding that “what makes it most fun is the atmosphere, if the place has a story, who owns it.”

Turns out you’re digesting more than just sturdy puffy tacos when you venture outside your bubble.