Under a night sky unaffected by city light pollution, flames from a bonfire flickering languidly, the faraway lowing of King Ranch Santa Gertudis cattle mingled with conversation between a dozen food writers at the iconic Kingsville-area ranch.

Not just any whiskey, mind you, but an exclusive collaboration from Old Forester Distilling and King Ranch, a pair of American brands with 300 years of history between them. The whiskey ties two legendary names together for what will likely make a splash in the whiskey biz — the first of its kind for both brands.

Kentucky's Old Forester Distilling released King Ranch bourbon, a spirit available only in the Lone Star State, on Nov. 1. Just in time for bonfire weather, the collaborative bourbon offers a lingering, warming finish and notes of molasses, leather, cherry, nuts and vanilla. The complex flavors are a result of a proprietary filtration method, which passes the bourbon through charcoal made with mesquite wood from the King Ranch property.

With the release, the ranch — known far and wide for its sprawling cattle breeding operation, Kentucky Derby champion quarter horses and a line of gadget-heavy Ford F-150 trucks — makes its debut in the alcohol market.

"The King Ranch has been approached through the years by various brands to create things such as seltzers, ranch waters, and so on, but nothing seemed like the right fit until we started talking with Old Forester," King Ranch CEO and President Robert Hodgen said.

As for the flavor of the charcoal-filtered whiskey, if you envision sipping sauce that somehow incorporates the black lumps your tío used when he fired up the barbecue pit, rest assured that's not what we're talking about here. 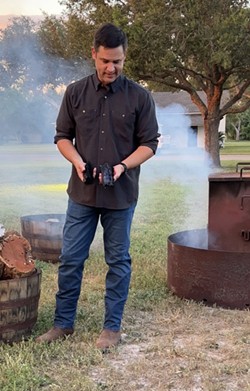 Nina Rangel
Old Forester’s Cole Irvin shows off charcoal in its finished form as he stands next to a special kiln.

"When we decided that this was the direction we wanted this whiskey to go, I said, 'I need wood from the property that's at least five years old,'" Old Forester Senior Scientist Cole Irvin said at King Ranch. "[King Ranch CEO Hodgen] said, 'How about Texas mesquite that's been aged about seven years?' And it all fell together."

For decades, ranch hands have cut down and collected mesquite from all over the sprawling 825,000-acre ranch in an attempt to curb the invasive species' unrelenting growth. While the trees provide ample shade for King Ranch's 35,000 prized Santa Gertrudis cattle and unmatched smokiness to Texas barbecue, that's about all they're good for, ranch environmental stewardship officials said. Left unchecked, mesquite pushes out natural grasses and creates grazing land that's barren and difficult for livestock to navigate.

Armed with a seemingly unlimited supply of mesquite with which to experiment, Irvin became dead-set on developing a method for creating the charcoal. Eventually, he and a dedicated team of ranchers nailed down the process, smoking the cut wood over indirect heat for 12 to 15 hours in a handcrafted steel kiln.

The finished product — rectangular, jet-black charcoal chips — are shipped to Old Forester Distilling's headquarters in Louisville, where bourbon sits, aging patiently in intensely charred oak barrels. The last step before bottling, and really what makes this expression unique, is passing the booze through layers of the mesquite charcoal, imparting dark chocolate and toasted pecan flavors.

"When I first tasted it, I got flavors of leather, tobacco and baking spices," King Ranch CEO Hodgen said. "It's a product we think really speaks to the partnership, and the legacy each of us wants to leave behind."

At first glance, the two brands didn't seem to have very much in common, but further investigation proves each company already boasts its fair share of history. And that word "legacy," one that has the potential to sound cliché and contrived, is actually a true point of commonality.

Old Forester was founded in 1870 by George Garvin Brown, who is responsible for other whiskey milestones such as the first double-barreled bourbon — a happy accident that was the result of a fire in 1910. It remains the only bourbon continually sold by the same company before, during and after Prohibition. The "during" part was possible because it marketed the spirit as medicine.

King Ranch's story dates back even farther. In 1852, Captain Richard King and business partner Gideon "Legs" Lewis purchased a 15,500-acre Mexican land grant, then known as the Rincon de Santa Gertrudis, along the Santa Gertrudis Creek. Now King Ranch is the largest operating ranch in the United States, covering an area larger than Rhode Island. Several members of the King family serve on the ranch's board and have a hand in the company's operations.

"Bourbon lovers across Texas are in for a rare and special treat that both whiskey connoisseurs and hardworking people can savor," said King Ranch CEO Hodgen. "This has been a partnership in the making for quite some time, and we're thrilled with the finished product."

While Old Forester's line of products are sold in over 170 countries worldwide, the King Ranch expression will remain available only in the Lone Star State. The new sauce will be a permanent fixture on the Kentucky-based brand's lineup, and joins a slew of other new whiskies made available to bourbon-loving Texans in 2022.

If you drink barrel-aged spirits in Texas, you know that the state's whiskey market is booming, clocking in at more than a dozen releases from local distilleries in the past 10 months alone. And it's not slowing down.

"What makes Texas whiskey so interesting is that the area and different environments of the state are so varied that distillers have so many opportunities to experiment. Texas distillers can really have fun," whiskey expert Clay Risen told the Current.

Risen, a reporter and editor for the New York Times, is also the author of the bestseller American Whiskey, Bourbon & Rye: A Guide to the Nation's Favorite Spirit, as well as an upcoming book, Bourbon: The Story of Kentucky Whiskey.

One could say he knows his shit.

"I'm excited to see where Texas whiskey goes in the next five, 10 years," Risen added. "The next chapter of American whiskey has the potential to present a very robust, multi-faceted landscape."

"I could nerd out all day about how to create new ways to develop whiskey," Irvin said. "This kind of project gets the wheels turning, opens new doors. We're making our own charcoal out here. You know, there's no telling what's next."