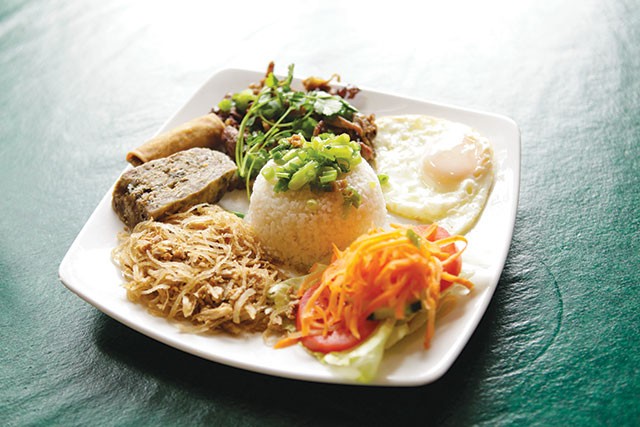 paytonphotography.com
Don’t be afraid to check out the white-board specials

I don’t expect much from Vietnamese restaurants in the way of decor; it’s more not Chinese and not Japanese than anything. I certainly don’t expect Greece’s azure seas and trailing bougainvilleas. But that’s exactly what you get at Phô Nguyen. They have unabashedly occupied a former Greek restaurant, mural-emblazoned walls and all, and, having added only a couple small shrines, are apparently experiencing no qualms of cultural disconnect.

One aspect common to many Asian restaurants hasn’t been abandoned by Phô Nguyen, however: it’s the “just you?” greeting if one is dining solo—the variation on which is “you by yourself?” It happens so often that I almost think I’d be offended if I didn’t hear it. It also sets the stage for the often oblique conversations than can lead to many happy accidents of ordering. In PN’s case, expectations are upended primarily by some non-standard nomenclature. For example, what’s labeled an eggroll, that commonly cardboardy curse of Asian lunch menus everywhere, is here really a (Vietnamese) spring roll—and, crisp and plump with pork, it’s excellent. The unfried, tofu-based vegetarian spring rolls (they might be called summer rolls elsewhere) we felt obliged to try, but they were frankly upstaged by the No. 4, stuffed with grilled pork, I had ordered on another visit—though the peanut dipping sauce was much better the second time around. The toasty rolls (no, they’re not really baguettes) that cradle the banh mi are the best part of the No. 29 with peppered “pork ham.” More actual pepper and a little more liberal use of pickled vegetables (in fact, we didn’t notice any) might have helped. But then, maybe they really didn’t mean “peppered” or “pickled.” In any case, add Sriracha.

The bowls that are often labeled bun (rice vermicelli) aren’t listed as such on this menu, but you can ferret them out by looking at the jasmine rice bowls also available with noodles. Order one. We (this time there were two of us, so the curse of being alone wasn’t invoked) liked No. 21 with marinated, char-grilled chicken, in large part because the chicken has genuine flavor and a respectable char–and then there were those good “eggrolls.” Mix the bowl up with your chopsticks before starting—Sriracha optional, but the included bowl of chili-adulterated fish sauce is obligatory. We even asked for more.

I don’t have too many preconceived notions about broken rice plates; they often seem to be a welcome forum for indulging the cook’s imagination. In addition to a mound of the rice (apparently once a cheap product rescued from the milling process that has become desirable in its own right) topped with a fried egg, PN added such temptations as fried pork, pork skins, a patty of ground pork and chicken wrapped in tofu skins, all served with a small bowl of syrupy, sweet fish sauce that pulls the parts together. Hope that it’s on the special board (though there is one on the regular menu) and have your way with it: violate the egg, scramble things up, dig in.

Diner intervention has always been expected with a bowl of phô. The accoutrements don’t vary that much (Thai basil, bean sprouts, lemon, sliced jalapeño…), and we know to add as many as will reasonably fit to start so that they can begin to influence the flavor. PN’s No. 9 (the “kitchen-sink” version with eye round, tendon, tripe, flank, beef meatballs and fresh rice noodles) announces its primary aromas even before the bowl reaches the table. The dominant star anise does tend to fade into the background as the already appealing broth gets even better with time. My only reservation, and it’s a universal one, is that the “meatballs” aren’t balls at all—and they’re rubbery.

The owner/hostess suggested that next time we try the bun bo hue, a spicy noodle soup from the specials board. Deal. But when we asked about the minced crabs with rice, another special, we got another stereotypical reply: “not for you.” (The corollary of this one is “you won’t like.”) Despite the incidental fact that she also said the crabs were “stinky,” the won’t-like challenge is one I rarely refuse—sometimes with good results, sometimes not. I’ll let you know.