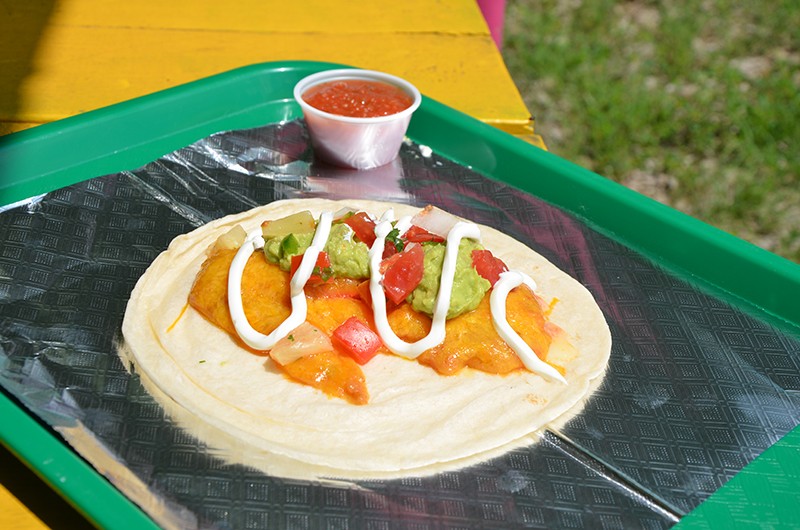 FLORESVILLE — It took about a year for me to make the trek to Raul's Enchilacos. For those familiar with our food section, I'm not often a fan of driving out past 1604, in either direction. But the promise of this restaurant's signature item had been eluding me, so I finally did something about it.

Before, I didn't really have a reason to drive south on I-37, take a left onto 181 and keep on driving for a little longer to check out a taco place.

Raul's Enchilaco opened in March inside a tiny roadside building in Floresville. The brainchild of Raul Vela IV and Saam Miremadi, Raul's Enchilaco's sought to gain a following there, where the rent is considerably cheaper than in San Antonio. The building, about 500 square feet — if not smaller — and a whopping 200 feet make up the dining room where four card tables emblazoned with Coke signs fill the room. A tiny ordering table holds a Square iPad pay system, which a tall and lanky Vela looms over. If I'm to be completely honest, the guy behind the enchilaco is a bit of a goof.

And I guess you'd have to be to create an entire business out of an admittedly silly menu item. Miremadi and Vela both cracked the code at making the enchilaco work while tweaking basic recipes for enchilada sauce, pico de gallo (theirs is chunky and dotted with pineapple chunks) and barbacoa. The enchilaco begins with red Mission corn tortillas and queso blanco rolled bright and early in the morning. Let's backtrack a minute. The pair of former roommates (Vela and his wife married a few months ago and now have a place of their own) carpool down from San Antonio every morning at around 7; they make a stop at HEB to pick up needed supplies and then make the 30-minute commute to their turquoise building.

They get to work at around 8. Vela takes on the barbacoa (his mother's recipe, which he thought would be "fuckin' awesome and so San Anto"), while Miremadi handles the batch of enchiladas. Doors open at 11 a.m.

Bryan Rindfuss
It's a drive, yes, but you won't miss it, thanks to the colorful exterior.

Our lunchtime visit last week was surprisingly pleasant, and that honor might go toward Vela's energetic hospitality and the eatery's attention to detail, which extends from the art-filled dining room to the food. Framed Tabasco artwork, black and white luchadores and kitschy models and drawings of the mythical enchilaco are sprinkled throughout the diner, along with Vela's collection of alternative indie cassettes (Beastie Boys, The Kinks, Willie Nelson, The Boss and Beck all share a space on the wall) providing musical ambience — at least until recently, when his player started eating tapes.

The enchilaco itself is pretty customizable, but here's the basic premise: a flour tortilla from La Luz on Blanco Road holds down the cheese enchilada, cheddar cheese, pineapple pico de gallo, sour cream and guac; you can add chicken fajitas, barbacoa or pulled pork. That's it. Yet the bite is fun and tasty and unless you're me and decide to tackle your enchilaco while wearing bright red lipstick — it's not as messy as you'd think.

"It's unique, but familiar," Vela says of Raul's, "it's this magical little combo. We wanted to come up with something unique, [and] not a carbon copy, so that when people had it they'd say, 'That's a fuckin' enchilaco.'"

Though the joint has amassed a following out of San Antonio and locals alike, passersby have also latched on to the enchilaco and its menu counterparts, which include street tacos and pimped-out nachos. Vela credits the attention to their high scores on Yelp, Urbanspoon and Trip Advisor combined, but it might also have something to do with the eatery's chill-as-fuck concept.

Everything's kept fairly simple, and there are no actual plates in sight. Instead Raul's drives home its casual attitude by serving most menu items on plaid paper boats, wrapped in foil or in to-go containers. The tacos are lightly fried and pliable. An order of super nachos with all the fixings, served on a halved to-go container, should definitely be shared between friends. If you're really packing an appetite on your way down, an order of Tres Hombres, with beans, cheese, all of the meats on the menu and a cheese enchilada will probably do the trick.

Though we did set up camp outside on the handful of picnic tables available behind the restaurant, Vela made it a point to check on us with his friendly joie de vivre. I'm not sure I've been called a "dude" more so than while eating my enchilaco.

Still, Vela and Miremadi will eventually make their way to San Antonio — that was the goal all along — but for now, a trip to Floresville is in order, pronto. You'll spot a few million bluebonnets and other wildflowers along the way, enjoy a hospitable experience and take down a fabled enchilaco. This is what road trips were made for.