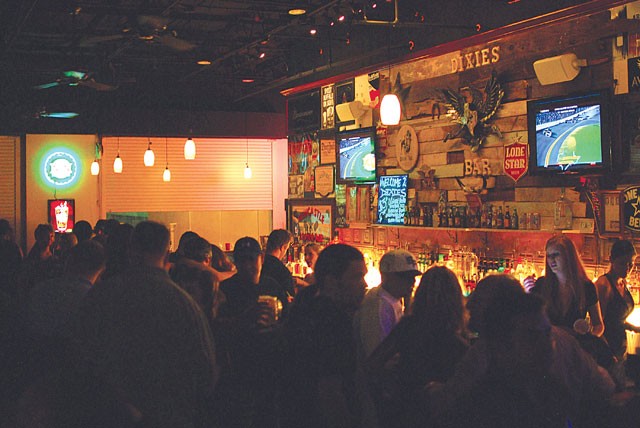 Best Use The place you go to drink whiskey and hang with friends, regardless of what scene you’re in.

We weren’t there the night they drove old Dixie down. But long-time patrons packed the bar last Thursday night for a $2-anything, $1-Lone Star blowout celebrating Dixie’s last night in the shadow of San Antonio International Airport at 8503 Broadway. The beloved neighborhood dive was moving shop the next night to the Embassy Oaks strip center, joining Oasis, Fast Eddies, and the site of the recently vacated Wiseguys. We heard they sent the old location out in style, though. A Dixie’s regular made T-shirts for staff and friends commemorating Dixie’s 2005-2011 Broadway run, customers signed the side wall, and the entire bar downed a shot at last call.

I’ve always considered it my staple dive, a true Texas bar kind of like The Mix, only closer to home. We’d stopped by to pay our respects the Friday prior and noticed that someone had scrawled “Mother should I trust the government” on the newly bare wall where signage used to live. It was real; Dixie’s was moving.

The huge neon sign, Dixie’s Bar and Patio, beamed out from the strip in red as my date and I pulled into the parking lot for the new location’s grand opening. “They’re gonna have a patio?” With a city-wide smoking ban pressing down, they better, right?

Inside we found towering ceilings, an L-shaped bar stretching the length of the place, and warehouse-style roll-up doors leading onto a massive wooden deck. Oh, yeah, it’s about four times the size of the old spot — and packed this night solely through word of mouth. Note to self: if you want to scan the bar, you’re gonna have to do some walking.

The warehouse doors give the interior an urban touch; the sprawling patio makes the space feel gigantic. Fortunately, the powerful jukebox blared rock standards and deeper cuts into the open air.

The rugged look of the old location is carried over in the Old-West-style wood wall, and the new centerpiece behind the bar is a tin mash-up of an eagle, the state of Texas, a star, and two crossed pistols. The walls are covered floor-to-ceiling with beer logos, liquor signs, and rusted iron decorations. The clear epoxy bar top is likewise awash in beer labels, with one end opening onto the deck so patrons can order from outside. Cheap drinks have always been Dixie’s claim to fame, and we were happy to find that wells and domestics were still $2.50. The new digs could handle a price raise, but keeping things affordable keeps faith with the regulars, who were mingling easily with a newer crowd.

The eclectic mix of rockers, cowboys, and Northside barflies seemed unpredictable at first, but people caught the good vibe, dropped their bullshit at the door, and went with it. And it worked. Dixie’s has always been a place where diverse crowds have coexisted peacefully. After all, it evolved from a country bar to a rock hangout to a local music dive through the years.

And while the bars off Bitters in the Embassy complex have always catered to the popped-collar set, the strip is changing. The shuttering of nearby Wiseguys has opened the way for a new music venue, to be called the 502, to move in. (It should be noted that 502 has had some false starts, and we haven’t heard of a definite opening date yet.)

Regrettably, Dixie’s management had to sign a clause that prevents them from having any live entertainment at the new location, and the bar’s general manager said that the 502 will be the only bar within that strip to have the privilege.

How will Dixie’s cope with the loss of live music? When will 502 open, if ever? And if Dixie’s isn’t a dive anymore, can it be our favorite almost dive? If the Grand Opening bash was any indication, Dixie’s will make it work. •