Six San Antonio foodservice pros give their perspectives on the show's accuracy and what they think the show conveys to viewers outside the industry. 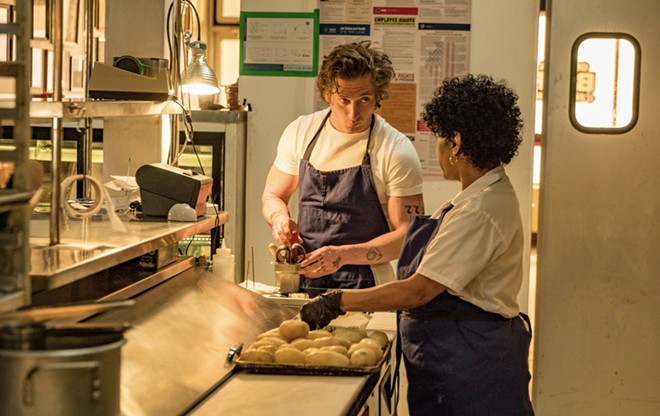 FX Productions
The Bear is so spot-on that Carmy's emotionally driven outbursts have reportedly triggered PTSD in foodservice veterans.

FX's smash hit The Bear has unleashed a powerful mainstream representation of the stresses and strains endured by the nation's foodservice workers.

The eight-episode dramatic series follows Carmy Berzatto (Jeremy Allen White), a young chef from the fine-dining world, as he returns to Chicago to run his family's sandwich shop after the death of his brother.

The show is full of details familiar to those who have worked in restaurants: from the plastic quart tub the main character chugs water from to the constant shit-talking amongst co-workers. Beyond those, the show unflinchingly depicts the pressure that drives many restaurant workers to addiction and isolation — whether it's to dull the noise or to keep up with the fast-paced environment.

The series is so spot-on that Carmy's emotionally driven outbursts have reportedly triggered PTSD in foodservice veterans. For some, the show can be a reminder of the screaming, harassment, sexism, overinflated egos and overwork they endure on the job.

We caught up with six San Antonio foodservice pros to get their perspective on The Bear's accuracy and what they think the show conveys to viewers outside the industry.

The show vindicates all of us that have chosen to be "lifers" in this fucked-up business, and it helps make sure our efforts are not diluted through Food Network and social media. Our stress and struggles are all too real. The show hits on all the real points of the struggle of owning a restaurant: bills, health inspections, employees, payroll. I could go on for days. It is a business meant for stress-mongers and not for the faint of heart. It also shines light on the family dynamic of a lot of kitchens. It seems like everyone in the kitchen knows more about their co-workers' lives than their own family. We support each other, not only through day-to-day work struggles, but also mentally with advice and support about day-to-day life. The Bear has been the only "chef" show that has nailed it.

Apart from it just being a very well-done show, it was incredibly accurate about the details ... the emotional attachment many chefs have with their knives; drinking out of delis; dealing with a solid long-time team member that refuses to buy into a new way of doing things; the anxiety that can sometimes set in when the ticket printer won't stop going; the stress of an independent owner to pay the bills, pay the staff and still put out a quality product. Adding the piece about his own demons relating to family substance abuse in Alcoholics Anonymous was incredibly moving. Like a lot of people, [the episode] "Review" was a little triggering for me. I've been an eager line cook that got screamed at for not staying on task, but I also lost it on an employee once because I was stressed out when the computer went down, and we had to do everything manually one night. It felt like I was right back there. When the episode ended, I was completely silent. [My wife] Allysse looked over at me and asked if I was OK. Trauma sticks with a person, and it's hard to shake, even when you've gone through lots of therapy.

I mean, obviously, the entertainment level was there for me because I could relate to it. And to see [actor Jeremy Allen White] in another show, aside from Shameless was cool. But ... it was a little upsetting for me because it felt like it was perpetuating the abusive nature of the kitchen, which is something that I feel like the industry has been trying to move away from. I think San Antonio has always kind of been removed from that, in my experience. Where I did experience these toxic environments, actually, was in Austin. When I was 18 years old and working in kitchens in Austin, I was having glassware thrown at my station when I messed up, and pans thrown at me. And that seems extreme, but it happened. It was actually very prevalent, unfortunately. San Antonio's culinary forefathers, Mark Bliss and Bruce Auden, [have] done a really good job about fostering cool-headed environments. I was never treated improperly in either of those chef's kitchens. I was never sexually harassed — none of that ever happened — and I was working with all men for the most part. So, I think that speaks a lot to San Antonio's collective kitchen culture.

The scene where [actor] Jeremy White finds his knife on the kitchen floor literally made me scream, "What the fuck?" out loud. When he was screaming, looking for a permanent marker, it showed how vicious the service industry can be — and expresses all the demanding aspects perfectly. It also showed all the different relationship dynamics, like all the love and hate between everyone working together and how it can and cannot work.

Loved the series, but it was, for sure, triggering. I think all chefs are Carmy at some point in our careers, especially in the flashback scene when he was in the fine-dining environment, and his chef was telling him he was basically going to be nothing. I took it as Carmy telling himself all those negative things because that's how he was feeling about himself. It's that feeling that you're trying your hardest and putting out your best, but still doubting everything you're putting out. It's relatable.

One thing that I really liked is the fact that, when talking about traumas that happen in the kitchen, [the show conveyed] that it's not one big thing — it's usually an accumulation of little things. So, there's a couple of scenes where the fight erupts, and everybody goes nuts, but it's not because just one thing happened. The main character gets thrown into owning and operating a place, when all his life he was cooking, you know, and that resonates a lot. Because when you own the place and the toilet breaks, then you've got to figure out how to fix that. The lights go out, or the gas is turned off, and all of a sudden, you have to become an engineer. Maybe somebody's having some real personal issues, and you become a psychologist, and you're still trying to run the restaurant, still trying to cook and still be creative and enjoy your craft. I have received messages from some friends from high school that were like, "Dude, is this for real? Is this your life?" And I'm always just like, "That's one of the reasons why we're so damn crazy." For somebody that is not familiar with the kitchen it's fun and interesting to watch, and for those who are familiar, you know that that's not what happens in a kitchen every day, but the representation, you know, is nice. [Chefs] can be so badly represented, so this was something fun and new, and it resonated with me.

There are a few scenes that are totally relatable as an owner and chef, and I think it was really well-researched and acted. The hazing and shit-talking in the show is pretty light compared to the things I've seen as a younger cook. Those aspects are in the hyper-competitive kitchens where the cooks and sous chefs are disposable. Fortunately, San Antonio chefs, on the most part, see our staff as the greatest asset we have. It's a much better drama than an industry biopic. Although, the scene where both the chef and sous chef are outside at the end of episode three, where the final words are "fuck brunch?" Yeah, fuck brunch.