W.D. Deli diners can opt to contribute to the fund at checkout. 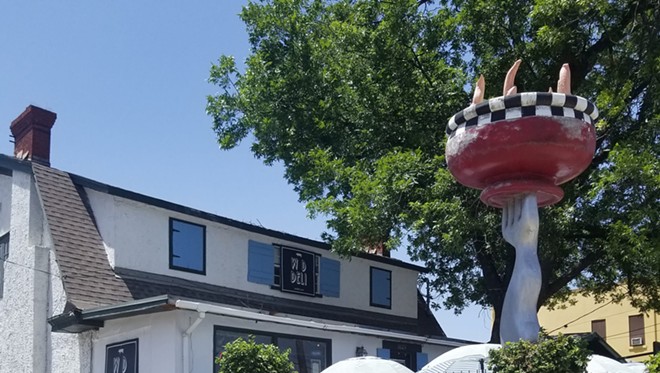 Facebook / W.D. Deli
Broadway eatery W.D. Deli has served central San Antonio for three decades.
New W.D. Deli owners Steve Clemens and Kelly Palubiak have pledged not to change much about the iconic lunch spot, but their latest addition will likely add some good vibes to the lives of many hungry San Antonians.

The couple this week launched Joyce’s Account, an in-house pay-it-forward system created in honor of Clemens’ mother and Palubiak’s grandmother, both named Joyce. Guests whose pockets are empty can now place an order for a ham or turkey sandwich with cheese and a drink and ask the W.D. Deli staff to charge it to Joyce's Account.

“Steve and I have always believed in giving what we can, when we can,” an Aug. 31 Facebook post announcing the initiative read. “May all who benefit feel the warmth and love of the Joyces’ in our lives.”

The announcement comes on what would have been Palubiak’s Grandma Joyce’s one hundredth birthday. According to the post, Grandma Joyce was the creator of a similar program, Give a Meal a Month, as well as numerous other charitable efforts. Both Joyces have motivated the couple, who took over the longstanding eatery in March of this year, into donating time and resources.

The post announcing the initiative notes that diners who would like to contribute to Joyce’s Account need only ask the staff when placing an order. They are able to add any amount to a diner’s check to contribute to the fund.

The new charitable effort is the second major change made by the new owners, following the well-received springtime announcement that the deli would begin slinging sandwiches, soups and salads on Saturdays from 10:30 a.m. to 4 p.m. Previously, the lunch spot had been a weekday destination, closed on the weekends.

Longtime owners Wayne Beers and Michael Bobo sold the business to local couple Clemens and Palubiak in March of this year. Beers and Bobo served up casual lunches and brunches in the distinctive converted two-story home at 3123 Broadway for more than three decades, drawing diners from all over the city.