The new spot featuring pastries from Sweetest Confections and breakfast items from Brother Frank's, both locally based. 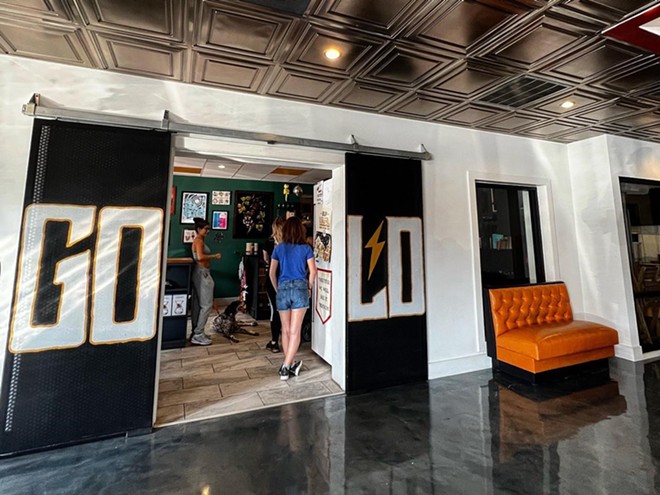 Facebook / Gold Coffee
Customers line up for a morning pick-me-up at Gold Coffee.
Less than a month after teasing plans for a new food concept via an Instagram post, San Antonio's Gold Coffee launched the venture Friday morning.

And sold out in 40 minutes.

Friday was intended to be a soft opening for Gold's Lil’ Treasures, an adjacent operation featuring pastries from Sweetest Confections and breakfast items from Brother Frank's, both based here in the Alamo City.

Gold and the new Lil' Treasures project are located inside the Freight Gallery and Studios at 1913 S. South Flores St. The latter occupies the space that previously housed Bandit BBQ.

Gold owner Jason Tantaros said he was saddened to see Bandit's crew pack their knives, but he and his wife recognized an opportunity to feature culinary up-and-comers in the vacant space — as well as offer Gold patrons some more space to spread out and sip on their caffeinated treats.

The Gold owners absorbed the rent for Bandit's old space and offered other businesses the chance to use the kitchen.

“The hope is that when people come in to cook, they're making their money. I don't need to profit from someone else's gift and talent,” Tantaros said.

Sweetest Confections owner Annalisa Ramirez has been selling her pastries at Gold for the past two weeks and plans to expand her menu as Lil’ Treasures grows. She left a career in the beauty business to pursue the culinary life after a client told her about an opening at Bakery Lorraine.

“I was like, 'I don't know, man, this Bakery Lorraine, it's a little intimidating.' But [the client] said, ‘Just interview. the worst they're gonna say is no.’" Ramirez said. "Well, I ended up getting the job.”

Ramirez worked at Bakery Lorraine for three years before launching her own business.

“I've just always wanted to have my own space, my own bakery, and just do my own thing,” she said.

Ramirez will bake goods seven days a week for Gold and plans to do pop-ups at Freight when Brother Frank's isn’t hosting breakfast service.

Brother Frank's chef-owner Casey Ruiz said he's excited to roll out his concept, adding that he feels his menu fills a void.

“We want to serve something that I think San Antonio is lacking at times: really good bread," he explained. "There aren’t a whole lot of places that do breakfast sandwiches that are made from scratch."

Ruiz credits his journey with Brother Frank's to his time at lauded Houston spot Squable, learning under the watchful eye of chef Mark Clayton, who directed the eatery's bread program.

In addition to his time in the kitchen, Ruiz also has a background in fabricating, which he used to build tables and doors for Gold. As he got to know Tantaros better, he shared his aspirations to launch Brother Frank's.

“He saw that I had a culinary background, and he knew that this is what I wanted to do," Ruiz said. "He started seeing the places that I cooked at, and slowly but surely, he was like, ‘Yo, this is the spot, this is what we want to do. Can you come in here and do this?’”