This year's Taco Rumble will take place at the San Antonio Museum of Art and raise money for the Texas Food & Wine Alliance. 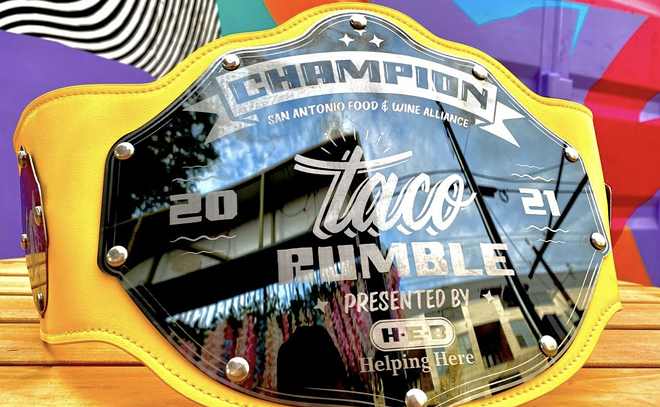 Instagram / sanantoniofoodwinealliance
The 2022 iteration of the Taco Rumble will take place at the San Antonio Museum of Art.
The Texas Food & Wine Alliance’s Taco Rumble will expand its footprint this year, bringing chefs from Houston and Dallas into a contest started in 2021 to see whether San Antonio or Austin culinary pros sling the best tacos.

The Sept. 15 charity event pits seven San Antonio taco specialists against four from Austin, two from Houston and one from Dallas. The goal is to prove which city best represents the Tex-Mex staple while raising funds for the Texas Food & Wine Alliance, a culinary nonprofit dedicated to supporting the South Texas food and beverage community.

Proceeds will fund a grant program for chefs, farmers and artisan producers. Since 2012, the Alliance has awarded $421,000 in grants to fund groundbreaking culinary projects.

This year’s event will include San Antonio's Sangria on the Burg and Milpa as well as newcomers Panfila Cantina and Tacos Cucuy. Other Alamo City contenders include Full Belly Café + Bar, The Jerk Shack and the boys behind Squeezebox’s Sunday Fajita Lounge. All will defend the Taco Rumble title, won last year by San Antonio's La Fonda de Jaime 2.0.

In addition to showcasing the best in taco craftsmanship, Taco Rumble will feature sweet treats as well as wines, craft beer and spirits tastings. General Admission tickets are $75.

This year's iteration of the Taco Rumble will run 7:30-10 p.m. at the San Antonio Museum of Art.