Snacks on the Run: More Races Are Blending Food, Booze and Health There seem to be three types of runners. Those who run as a way of life, those who only seem to run to the fridge, and then there's the runner who does both.

The growth of 5Ks, 10Ks and half marathons around the city isn't limited to San Antonio, either, as more runners are competing and finishing races across the nation. According to runningusa.com which tracks race finishers, "a total of 1,986,600 runners finished a half marathon in the U.S. in 2015, down from the record high of just over two million finishers in 2014. While participation dropped, there were a record 2,700 U.S. half marathon events run in 2015, up from 2,500 in 2014."

Clearly, running is in. And so is dining. Those looking to combine their love of the runner's high with a sugar high have plenty to choose from when it comes to fun runs with food and booze components.

Last weekend's Culinaria 5K Wine & Beer Run estimated a total of 2,500 participants, with 1,500 of those runners and walkers actually lacing up their shoes. The other 1,000 are part of the spectators who can pay for access to the finish line reception without having to zip around La Cantera.

The race takes all levels of participants and was an instant hit since it launched six years ago.

"Our race director said we'd get 300 or so people — 1,000 showed up," president/CEO Suzanne Taranto Etheredge told us over the phone.

The reception that greeted runners and spectators at the finish line was a smorgasbord: Grayze's heirloom tomato and shrimp salad, Kona Grill's sushi rolls, soba noodles from The Good Kind, Whiskey Cake's lemon poppy seed pancakes, a pancake station by chef Brian West and desserts from the University of Houston's hospitality program. 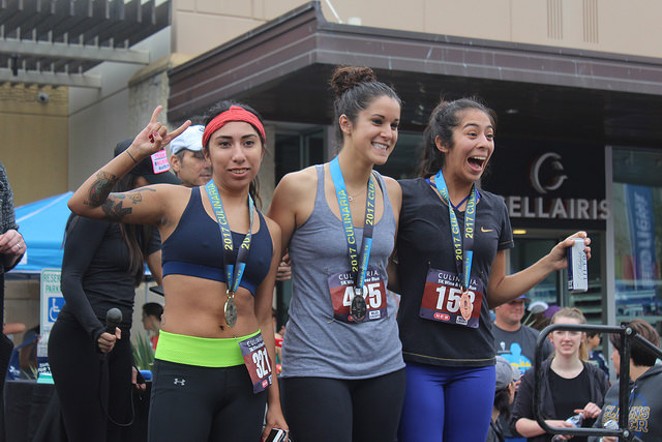 "My motivation to keep going is that I'm excited to eat another meal after said run," Velasco, who's done ultra-races in the past, said. "A lot of time before big races, like when I run from Austin to Corpus overnight, I have to eat massive amounts of carbs and protein the whole week as well as hydrating myself to the max." 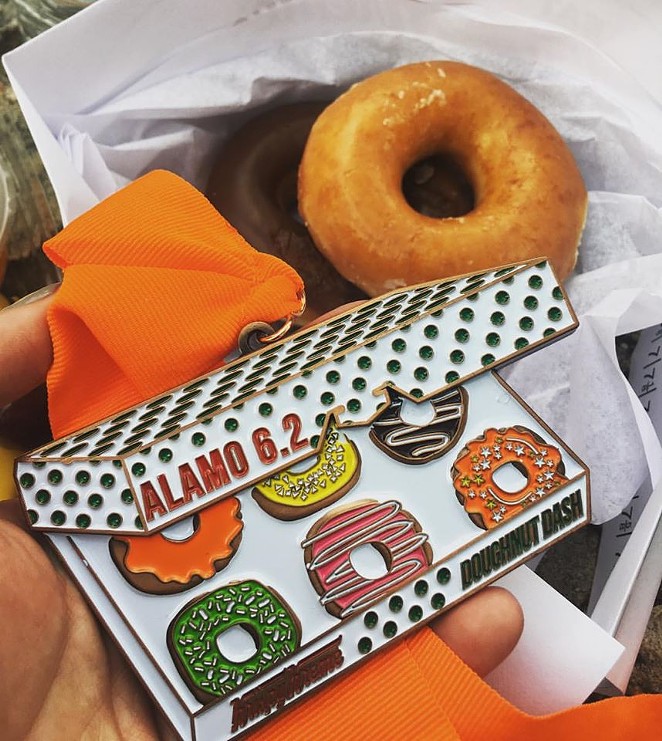 Allie Segura
The finisher's medal for Doughnut Dash
Culinaria wasn't the only organization hosting a food run this past weekend. Sunday's fourth annual Alamo 13.1 included a Doughnut Dash 10K with lacquered doughnut medals and Krispy Kreme at the finish line.

This Sunday, the Corona Paella Challenge goes into its 8th year with an added event that'll precede the 40-plus contemporary and classical paellas. The first-ever Paella 5K run/walk will kick off the day's festivities at 8 a.m. with a course through on the Mission Reach portion of the river.

"Runs have gained in popularity for this huge segment of new runners," Taranto said. "We're mixing fun and fitness."

For Jon FitzSimon, who owns and organizes Inspired Race Events, combining beer and running was a no-brainer.

"I love craft beer, that's safe to say for sure," FitzSimon said over the phone. He organizes the Texas Beer Series, a collection of six races that are held every month from March through November (they take the hot summer months off). The six 5Ks are held at area breweries and broken up into five laps. Runners are given samples of the beer per lap, and they ultimately choose which pint to celebrate a completed run with. Participating runners and walkers span the gamut when it comes to demographics.

"Some people love running and just get up in there. Anything's better than sitting on the couch. We see pairs of friends come out, people who sign up with their brothers, cousins, moms, daughters. You get a little exercise, burn some calories," FitzSimon said.

How many calories the average runner might burn varies, of course, but registered dietitian Krista Neugebauer estimates a 500 calorie burn. She recommends trying to maintain some kind of balance.

"If you're going out to do a 5K that day, it's always important, whether you're a new or seasoned runner, to remember that food is fueling your run," Neugebauer, part of Jan Tilley & Associates said.

"If people come in and want to do a 5K, but not change that foodie lifestyle, then they have to manage their portions at events," Neugebauer went on.

For Velasco, race day means a small meal usually consisting of a piece of multigrain toast with peanut butter and banana and some water.

Farringer caught the running bug after his wife signed him up for a 5K. Though apprehensive at first, Farringer used a Couch to 5K app to train. He eventually started eating healthier, going to the gym, and running more regularly but the pounds really came off when he started cutting back on beer.

These days, a svelte Farringer is down 60 pounds and runs multiple halves every other weekend.

"I still attend events, but I have a small sample or a small pour," Farringer said, "If I go to a happy hour at Freetail or something like that I can get a half pour and it's not a big deal. For a lot of people in the craft beer community, it's about quality over quantity."