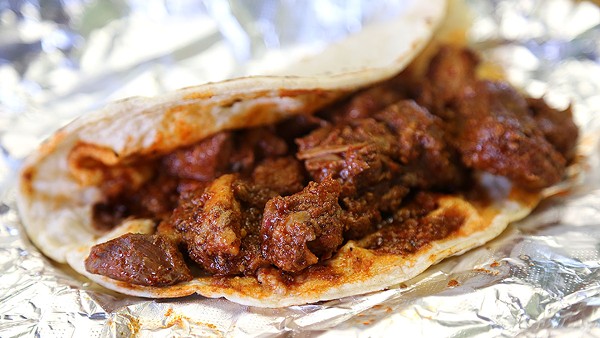 Reposted with permission from The Tacoist.

And the award for the coolest name for a taqueria goes to Los Cinco Hermanos, which could be the title of Quentin Tarantino’s next movie. I’m thinking a spaghetti Western complete with epic Ennio Morricone-style music, the five brothers on horses, galloping toward the camera while putting away bean-and-cheese tacos.

Go ahead and nominate Los Cinco Hermanos for best hand-painted signage, too. I admit that the more of the menu that’s painted on a taqueria’s facade, the more I’m drawn to the place. This one even comes with caricatures of cows and pigs looking all cute ... before they’re ground up, seasoned and put in tortillas.

Los Cinco Hermanos looks so cool that my expectations for their tacos were unrealistic. I mean, look at the photo — the cow has lipstick!

None of the tacos made me want to get a tattoo of the promiscuous cow — band name alert! — but they were solid across the board with only a few misses, and with decent tortillas.

My fellow taco fanatic and I started with two tacos uncommon on San Antonio menus: carne con chile rojo and the bean and rice.

I really enjoyed the meat in the red chile sauce, which was spicy and very tender. I had trouble delineating what peppers they used, but the combination resulted in an earthy and mellow flavor (strong in garlic) that put the emphasis on the meat itself.

The bean and rice is a taco I make at home often — usually from Taco Cabana plate leftovers — but it's a rarity on local menus. We ordered this one on corn. To be honest, I couldn’t get a good read on the beans because there was like a whole ladle of rice in this taco. But it definitely worked.

The potato a la Mexicana was perhaps the best taco with its well done potatoes and charred veggies. The country (sausage) ranchero had a very nice tomato flavor and you could really taste the bell pepper, which was more of a player and less of an afterthought. The chilaquiles were crunchy, but I wanted way more egg and cheese.

The carne guisada was so-so with a strong chili powder flavor, thick and muddy, which I loved. As thick a stew as you’ll ever see. Unfortunately, it desperately lacked seasoning.

So I enjoyed Los Cinco Hermanos. Good food. Great service. I interacted with literally four of the staff while I was there. This includes the owner who asked why I was taking pictures of the outside. Because I’m a sucker for cartoons of a dolled-up animals. At least they didn’t put lipstick on the pig.

Visit The Tacoist for more snapshots of San Antonio taquerias.