Near Dark, Hands Down and Bar Ludivine all recently opened along a stretch of the roadway. Ron Bechtol
Leslie Turner of South Presa Street’s Hands Down tends bar with a smile in front of the establishment’s colorful mural.

It's just 50 purposeful steps down South Presa Street, give or take, from recently opened bar Hands Down to Near Dark, another newish addition to the south-of-downtown drinking scene. Between the two, you'll also encounter Bar Ludivine, which opened late last year.

My original notion was to pitch my visit to this trio of newish establishments as the city's shortest pub crawl. But during my visit, timed around sundown, a different kind of movement emerged — a transition between day and night. A buy-in to either metaphor is optional, by the way.

Here's what I mean: when it comes to décor, my stroll took me from the shadowy into the light. Near Dark (1024 S. Presa St., (210) 600-4009, neardarkbar.com) is the newest of these three tippler's havens, having opened exactly a month from the day I visited. The two proper-looking bartenders also turned out to be the owners, their practiced and precise shaking techniques speaking of much more time behind the bar.

For my money, Near Dark's quasi-goth, What We Do in the Shadows theme doesn't add much to the drink offerings, but it's fun enough. It could be taken further, though, with the addition of more ghoulish portraits and bleached skulls, not to mention closing the black draperies against the vampire-vanquishing late afternoon sun and the mood-killing streetscape outside. With those changes, the name of the spot's Not Today Satan cocktail might seem even more appropriate.

During my visit, my drink choices were driven more by ingredients than amusing names, though. Among the house cocktails, I went with the Southtown Beat Down ($12), a stirred blending of bourbon, Campari, sweet vermouth and Benedictine served over a single large ice cube. At first, I found it a tad unbalanced in the direction of the sweet vermouth and Benedictine, but with time it all came together.

Switching to a gin base, my next nod went to the Army Navy ($12), one of the menu's classic cocktails. Because of its almond-based orgeat, you might think of this drink as a baby tiki minus the orchids or umbrellas. Yes, the almond comes on strong, but this too mellows out after the first sip or two. 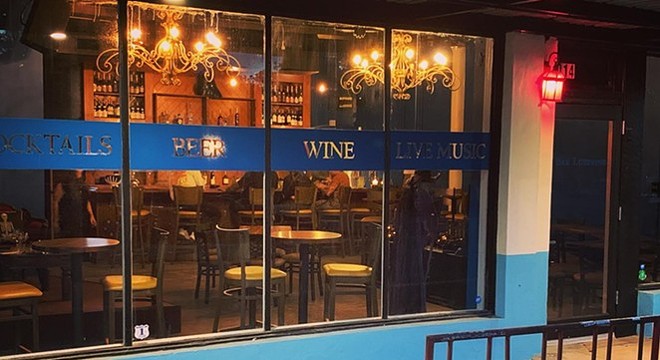 Facebook / Bar Ludivine
Bar Ludivine, another South Presa newcomer, bills itself as a destination for both cocktails and lesser-known wines.

Bar Ludivine (1014 S. Presa St., (210) 908-9209, barludivine.com) occupied the middle ground my South Presa odyssey — in every possible way. Where Near Dark's walls are a deep plum color, Ludivine sports a bright, French blue. A mural inside tells a tale of two towers: San Antonio's Tower of the Americas and Paris' Eiffel. The artwork proclaims the bar is "Your destination for craft cocktails and wine," but it's unlikely that wine lovers will beat a path to the door for that alone. Even so, credit is due for listing lesser-known whites such as picpoul de pinet.

The cocktail list looked more impressive at first glance. The Emerald Dagger ($14) stood out from the menu's seasonal list, but alas, it was not to be. "We're out of green Chartreuse," confessed the lone server, and though it's not listed as an ingredient, this potent liqueur would have contributed both the emerald aspect and a powerful jolt of herbal flavor. The switch to a "Blanco" Negroni ($12) yielded a well-made, mezcal-forward stirred drink with Suze and Lillet Blanc.

Emboldened by this positive experience, I moved on to the Café No Se ($12), a heady blend of Jamaican rum, Suze, coffee liqueur, demerara gomme syrup, pineapple and lime. The drink ended up being more like Café No Hay, since the bartender had used the last of the Suze in my Negroni. Undeterred, I suggested subbing Cynar, a favorite amaro, expecting that it would play well with others in the lengthy ingredient list. Shaken and served with floating coffee beans, it did indeed.

The moral here? Come to Ludivine prepared to be flexible, perhaps when there's a musical act on stage to distract you.

Early evening, when it's still bright outside, probably wasn't the ideal time to visit either Ludivine or Near Dark, but it was perfect for Hands Down (1012 S. Presa St., (210) 462-1430, handsdownbar.com). The light — filtered by screens at the sidewalk's edge — brings the space to life, illuminating the colorful mural, the wall of thoughtfully curated bottles of wine and the back bar loaded with impressive amari and aperitivi.

In the appealing setting, I was inspired to order two cocktails I usually disdain. One was a gin-based frozen drink, while the other was billed as an "improved" Long Island Iced Tea, a concoction that normally includes a kitchen sink's worth of boozy ingredients designed to inflict maximum pain. It didn't hurt — until later, anyway — that both were $5 happy hour specials.

If you want to actually taste any frozen drink, its flavors must be exaggerated, and Hands Down's blend of gin, juniper tonic and salted lemon-lime cordial pulled it off perfectly. After the initial sinus freeze, the flavors softened as the drink slumped into submission. A bowl of curried pecans proved an amiable companion.

I was initially less impressed by the bar's take on a Long Island Iced Tea, despite a pedigreed list of ingredients such as Bonal, Cocchi Americano and Fernet — the latter being a bully that often dominates, as it did here. I might be tempted to add more orange liqueur to balance Fernet's bitterness, but this drink also relaxed into a libation worth contemplation as the sun set.

Lest you sink more quickly into a state of heightened inebriation, I don't really suggest you hit all three places on the same night. The crawl I mentioned earlier was just another metaphor.