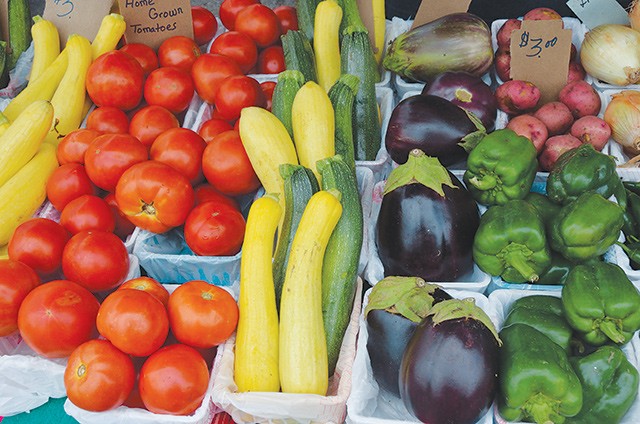 The landscape changed two weeks ago when the Southtown Farmers and Ranchers Market debuted at Blue Star Arts Complex. With scads of chef-driven restaurants about, Southtown isn’t exactly a food desert, but there’s been a shortage of opportunities to purchase nourishment in the raw.

Operated by Heather Hunter and David Lent, founders of the Sunday farmers market at the Quarry, the new Saturday market opened at 9 a.m. under storm-threatening skies with 15 vendors selling local produce, fresh eggs, boutique delicacies, as well as one of our favorite food trucks, Cheeks and Chops.

Over 300 shoppers and curious onlookers strolled about the parking lot of the Blue Star Arts Complex, taking a gander at the tables filled with fresh zucchini, summer squash, eggplant, and tomatoes offered by Bikkurim Organic, Engel, 3G, and 9-1 Farms. Revolución Coffee and Juice offered cold, quenching respite and Bakery Lorraine’s pastries and fresh loaves flew off the racks. Even dogs were provided for, with homemade canine treats from Katie’s Jar.

Not a bad showing for the inaugural day; Hunter and Lent plan to grow the list of sellers to 20 in the next few weeks, with hopes of matching or surpassing the 30 regular sellers at the Quarry.

Conspicuous in their absence are the trinkets, crafts, and cheap sunglasses sold at many weekly markets, which recalls the saying: “Farmers markets tend to get fleas.”

“That’s the kiss of death!” says Lent. “Having studied farmers markets, many don’t have a lot of staying power. They have a lot of problems getting food vendors, so to supplement their income, they get people who make things out of popsicle sticks. Our policy is we don’t take on anybody who doesn’t fit the bill — we hold our ground.”

Also missing are third-party vendors. “Farm stands?” asks Hunter. “The guy selling Fredericksburg peaches off North New Braunfels? Guess what? Most of these stands are selling produce they pick up. That’s why we are diligent and curate who sells at our market. About eight out of 10 who apply, don’t get in.”

To sell at the Southtown or Quarry markets, Lent and Hunter check each producer or maker personally. “We visit everybody’s farm, we verify they are growing what they say they are growing,” says Lent. “We make sure that if they are making something we know what their ingredients are. We’re pretty strict — but we also think that’s the key to success.”

The pros are impressed. Javier Flores, chef/proprietor of Cheeks and Chops and soon-to-open Baracca restaurant at the Blue Star Arts Complex, told the Current he plans on buying his produce from market farms, and will be sourcing his chickens and eggs from Parker Creek Ranch, the sole rancher currently selling on Saturday. “It’s a bit more expensive, but not much,” says Flores, “and looking to make high-quality food, it’s worth it.”