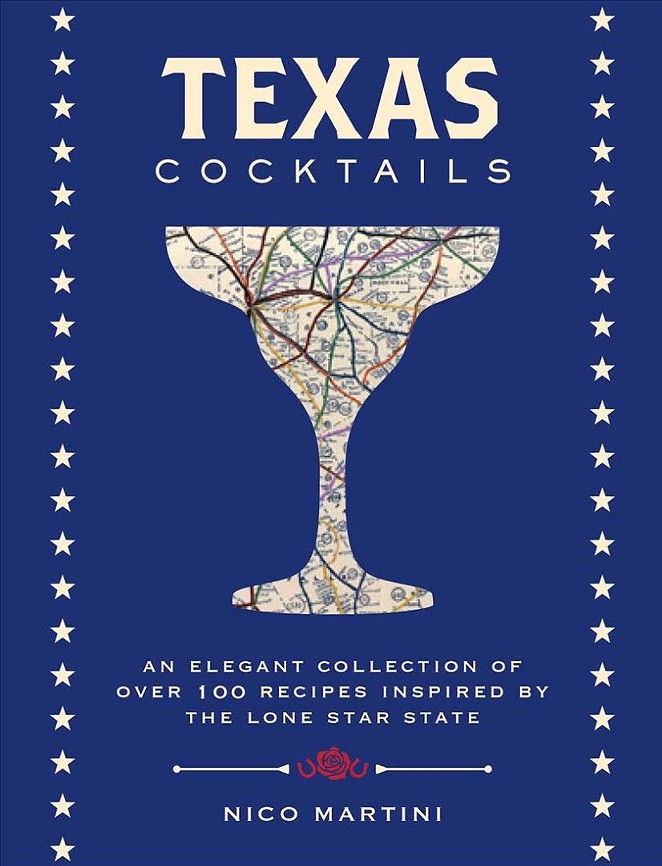 Courtesy
Cocktail historian David Wondrich once tried researching Texan cocktails and came up with very little. There was Commander Dick Dowling, who launched the Bank of Bacchus and a handful of cocktail names, but no drink measurements to speak of.

So when Nico Martini — yes, that’s his real last name — took on the research for Texas Cocktails, his first cocktail book with Appleseed Press Book Publishers, the former lecturer at the University of Texas-Dallas knew he had his work cut out for him. But as the founder of Bar Draft, a system that puts cocktails on tap, and frequent seminar host at the San Antonio Cocktail Conference, Martini had done a lot of previous leg work.

The result is a stout 367-page book that’s more Frommer’s Travel Guide than it is cocktail book that would be filled with recipes. To be fair, there’s a reason Wondrich couldn’t find much information. There was that pesky thing known as Prohibition, and even these days, cocktail-makers migrate a lot, shaking tins and developing recipes for several bars at a time. Yes, recipes are there, but what Texas Cocktails does right is detail a ton of cocktail history from our massive state.

Texas Cocktails is broken down into “Classic Cocktails;” “Creative Concoctions,” with each major cities in Texas getting its own chapter (Houston, Austin, Dallas/Fort Worth and San Antonio); “The Wide World of Texas;” The Best of Texas;” and “Texas Cocktails Outside Texas.”

Each chapter is filled with tidbits on craft cocktails in the Lone Star State — from the wasted playlist that features Texas-inspired drinking songs to Q & As with local craft connoisseurs and spirit-makers. San Antonio’s own Mark McDavid of Ranger Creek Distilling & Brewing shares an impassioned guide to spotting “Fakers,” or spirit-makers who might be playing it fast and loose with their labels. There’s a handy guide for where to buy your hooch, along with a list of spirits and mixes made in Texas.

“I wanted to do a snapshot of Texas, and take a look at what has happened and what is happening,” Martini said.

You can’t call yourself a true Texan unless you can make a Paloma (as Martini puts it, we “have the best grapefruits”) and a frozen margarita. True Texans also know about the Chilton, a refreshing cocktail hailing from the Lubbock Country Club and made with Texas vodka, juice of two lemons and topped with Topo Chico (anything else would simply be treasonous). Of course, there’s the Ranch Water, which originated in the Gage Hotel in Marathon, and is made using 10 ounces of Topo, 1 1/2 ounce of blanco tequila and 1/4 ounce fresh lime juice.

“There’s 12 cocktails in here that you probably won’t make at home,” Martini said, “You’ll end up making too much shrub, or whatever, which is fine, but it’s great for Ranch Water, which you could make with the stuff that’s in your fridge right now.”

The San Antonio Cocktail Conference could make any local realize just how advanced the city is in cocktail-making. Martini nods to Sasha Petraske, a lauded New York mixologist and co-founder of the local conference, who also helped establish cocktails in Bohanan’s Bar.

“When you’ve got someone like Sasha who comes in and starts a program and starts disseminating people who know what they’re doing in bars ... it’s a fantastic way to have a city go about something the right way,” Martini said.

“There’s a unique style in San Antonio, and it showcases what Texas is really good at: approachability. You have hangouts with incredible drinks, and that’s the way you grow a cocktail scene.”