The 6,500-square-foot bar has private rooms for tabletop gaming and even a 49-seat theater. 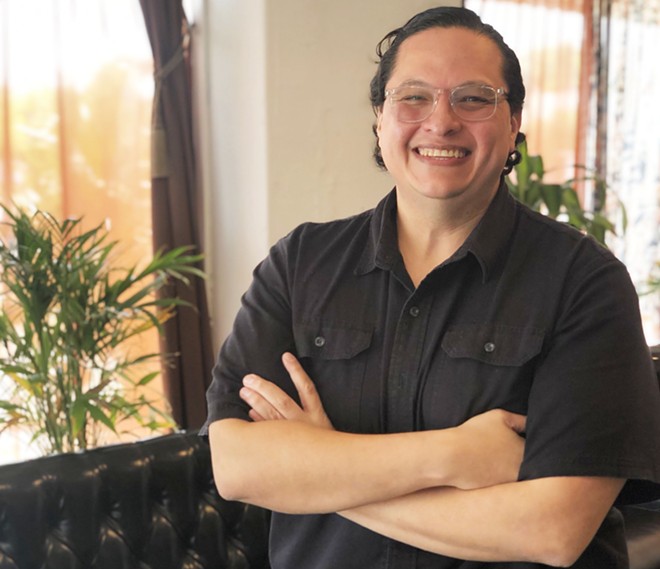 Nestled in the same Fredericksburg strip that hosts the historic Woodlawn Theatre and music venue The Starlighter, new bar Black Potion boasts impressive craft beer and wine lists. Neither those nor its hip location are intended as its primary draw.

Instead, owner Enrique Cortez envisions the spot as a tabletop tavern — a sanctuary for gaming enthusiasts to imbibe, unwind, roll dice and even purchase games stocked at the establishment. He's put immeasurable effort into making sure his space at 1900 Fredericksburg Road is an enjoyable atmosphere for all — not just those with enough geek cred to know its name is derived from a game about werewolves.

We took a tour of the 6,500-square-foot Black Potion and spoke with Cortez about his plans for the all-are-welcome bar and game shop.

We'll start with the obvious question: why a board game bar?

I really fell in love with board games about five or six years ago because they've evolved so much from when we were kids. Back then, they were honestly terrible games in a box, when you actually play them. Now, more games are so sophisticated and so interesting — they're like moving puzzles, they've got beautiful artwork and a great story to tell. And they engage your mind. For the same reason people like crochet and people do puzzles, games allow you to engage that part of the brain, and there's the social element too, because you get to play against other people and have that interaction. So, I rediscovered them and I fell in love, and I started getting involved with a board game community here in San Antonio. I met some great people, and through all those connections over the years, I met this gentleman who had a retail shop. And he knew I had side hustles with board gaming and gaming in general, so I asked him what he thought I should do. I had a little bit of extra money; times were good and he happened to be looking for partners. At the time, I'd been traveling, and I knew that board game cafes and taverns are a big thing in other cities, and San Antonio didn't have any. So, we partnered and opened a small space, essentially the original and only tabletop tavern in San Antonio.

I wouldn't consider this space "small." What happened to that venue?

We got our beer and wine license in September of 2019. We were hitting our stride, you know, going through Christmas, through January 2020. And then by February, we started to hear about COVID. And then we were told to prepare for a two-week shutdown in late February. Then we had an employee who was like, "Hey, my grandmother got tested, she's sick, and I live with her." My partner and I had to have that internal discussion, basically figuring out how to handle that. So, we shut down because of COVID, and then we just couldn't survive. So, during COVID I dedicated so much time to driving around and looking for commercial properties that fit my vision. I wanted a large footprint, free parking in a high-traffic area; I wanted to be in a certain side of town. And I found this place, which took me six months to build out. It was a lot of work, but now we're able to offer things unlike any other game shop in town.

I want people to feel like there's a chill vibe, where they can hang out with friends or even work. I offer free WiFi for people who just want to get out and be productive in a different environment. I also have several private rooms available, and those lend themselves to a more private space for tabletop gaming and roleplaying games like Dungeons & Dragons. There's also a 49-person theater built into the back of the building that brings this place to a whole different level — unlike any other game shop. We just hosted the 48 Hour Film Festival and screened the final films in the theater, and it was such a thrill — inviting artists and creatives to come in here and use this space and make it their own. I'm beside myself that that just happened. I'm so proud of these kids, and now I've got an improv group, House Party Improv, coming through a few Saturdays a month to do shows on that stage.

So, it sounds like the space opened your capabilities up to be a home for local artists, not just a game shop and bar?

Absolutely. I put out a call to artists on my social channels, basically saying, "I have this gift that was given to me, and I need to share it. If you're a creative person, and you want to put on a showcase or a play, talk to me. The answer is yes." I want to see cool shit happening. I want to bring that to the community and be a gathering place for creatives so we can see their ideas come to life. I did all of this to make this place come to life, and now we're getting a chance to do that for others. I have so much open space on the walls that I'd be happy to host local artists' work there too. I just want this to be an opportunity for creatives to shine.

I got the weirdest compliment a few weeks back, this guy came in and told me, "This place is so cool. It feels like I'm not even in San Antonio." And I [get his] meaning, but it was also off-putting, because San Antonio is cool. It's just cool in its own way. I just want to add to that in several ways by catering to different types of people. Gamers come in all shapes and sizes, all ages, so there's something for them. And secretly, one of my metrics of success is if this place can be seen as a date night spot. Because that means that I'm speaking not just to gamers but to the community at large. That I've created such an inviting place that people would want to bring someone here to impress them. That's how I'll know I've done something right.