The wing joints (in alphabetical order)

This family-sports-bar franchise inundates you with TVs in the bar area (16, including two enormous flat screens over the bar), but the marvelously hot Buffalo sauce will focus your attention on the business at hand. The medium-meaty wings were nicely sauced, and the beer selection is more extensive than Wingstop’s. Plus: our server’s hair was American Idol-worthy.
Wing score: 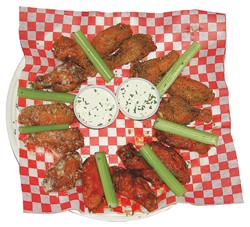 We really liked the well-balanced, spicy sauce at this tiny neighborhood Italian joint, where you can hear the kitchen say, “wings are ready.” The service is friendly and attentive, too (no chance your table will get lost in a rush), and while there’s no beer, you can BYOB.
Wing score:

Dick’s Mumbo Jumbo Chicken Wings, served dry with the sauce on the side due to a server misunderstanding, were crisp and semi-meaty, but otherwise unmemorable. Which isn’t to say bad; we still polished off the basket. Like Hooters, much of Dick’s wings charm comes from the old-school River Walk party ambience — sort of like the last Sunday of Fiesta. Also the locale in which we spotted the most motley PDA sessions.
Wing score:

Firehouse features one of the few sauces we tried that didn’t taste like a basic combination of hot sauce and fat. The spicy, semi-thick sauce was vinegary and peppery, with a thin sheen of separated oil on top, suggesting that it might be house-made. The wings themselves were meaty, too, making for an overall snackalicious package. The northern-town-bar atmosphere, though, was undermined by the chairs — bought used (and suspiciously stained) from a retirement home was one guess. Our suggestion? Sign up for the poker tables in the back room, and snack on wings during the breaks. And do not, we repeat DO NOT, order the mild sauce.
Wing score:

Hooters goes for debauchery in both black panties masquerading as waitress uniforms and in their Buffalo sauce, which was the butteriest (or veggie-fattiest) of the wings we sampled during this odyssey. The fat-to-hot-sauce ratio is too high, in fact, but we liked that you could order a platter with a bottle of bubbly ($199.99 for Dom Perignon; $39.99 for Korbel) and on Sundays you can chase the grease with $2 longnecks. The buzzing atmosphere, with sports on the TVs, tourist-watching along the River Walk, and and a jammin’ ’80s soundtrack, got an A+.
Wing score:

We found the Hackney Hot Wings not so meaty, “but who cares?” wrote one critic, because the spicy sauce was “delicious,” with an addictive vinegar tang that caused us to eat the entire pound and skip our next destination. The atmosphere, featuring comely waitresses in kilts and knee highs, is a high step above Hooters.
Wing score: 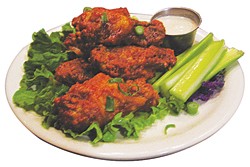 Pat O’s wings were meaty and fresh, but the sauce — a Bloody Mary marinara, true to its spicy, tomato-based namesake — is not remotely Buffalo. We wouldn’t turn down a basket, though, especially if we were sitting fountainside on the patio and sipping their “right fine” mint juleps.
Wing score:

The wings and the atmosphere are worth the drive to this Hill Country hideaway. Set aside a Sunday afternoon to while away the hours at a metal-beer-advertisement or wooden tabletop under a classic assortment of Texas roadhouse decorations. Service is efficient but friendly, longnecks are served in Koozies, and the clientele is in no rush. Best of all, the crispy drumettes are accompanied by what tastes like straight-up Louisiana-style hot sauce for dipping. We almost fought over the last two in the basket.
Wing score:

La Tuna’s wings were the sweetest of the birds we tried. They were nice and meaty, but we’re a spicy-tangy crew, so we wouldn’t rush back for another round. But as regulars know, the bottlecap-filled, tree-shaded yard and cold-beer selection can’t be beat.
Wing score: 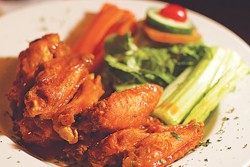 Waxy’s charmed us with a pretty plate presentation, including artfully arranged veggies. But more importantly, the classic Buffalo sauce – which tasted just like hot sauce smoothed out with butter – lived up to the first impression. This was also the only place we reviewed that proffered Wet-naps for cleanup. Note: Vodka tonics go well with wings.
Wing score:

Wingstop’s flappers aren’t as meaty as some other joints’, but this Texas-based chain’s sauce is outstandingly tangy and spicy, and there’s a lot of it. This is the Buffalo joint of choice for those who view wings as merely a delivery system for sauce-soaked skin – although one critic questioned whether the sauce is thickened with margarine. We left with the tell-tale orange fingers. Pluses: Sex Pistols in the music mix, and an adequate, although not comprehensive, beer selection, including some draft choices.
Wing score:

This locally owned franchise gives you a reason to make Buffalo wings a part of your daily diet, with a tasty Louisiana twist. Family-
friendly, but with a full bar, and plenty of TVs for sports fans. The wings aren’t strictly Buffalo, but the savory spicy versions won’t disappoint, and may harken back to one of the Buffalo-wing origin stories, John Young’s “mambo sauce.” •