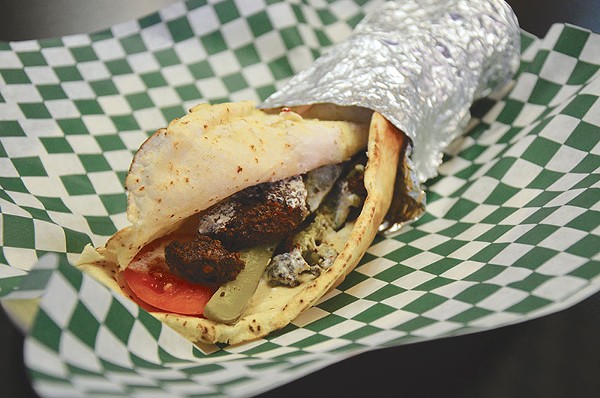 Jessica Elizarraras: Food and nightlife editor with a penchant for all things saucy

Comparing lauded falafels across town was likely a fool's errand, considering the vast differences between wraps, but here we are. The criteria are simple: eat falafel, write about its merits and/or pitfalls and repeat. Here are our findings.

RB: The toasty pita (a tad dry) partly wrapped in foil, is itself wrapped around flattened falafel balls dressed with pickles, parsley, tomato and a loose tahini sauce. The parsley seems a good touch; the pickle ratio is especially good (yes, I like pickles). The flattened falafels themselves are cheekily crunchy and reasonably moist, but the tahini sauce seems to have little impact (Maybe ask for extra on side?). I ordered a side of maharmara (roasted red peppers with garlic and chili — flavorful and not searingly hot) and would recommend doing the same if consuming the pita there. This is reasonably portable for to-go purposes, the tahini being modestly enough applied not to drip much. Comes with fries.

JE: Sampled second while on our tour de falafel sandwich, Jerusalem Grill had the difficult task of standing out and winning over taste buds before fatigue set in. Mission accomplished. Our server on duty explained the bread was shrak, brought in from a Mediterranean store in Austin, though the bread will be made in-house at the second Jerusalem Grill on Wurzbach (a bigger locale housed in a former IHOP that's catty-corner from Pasha Mediterranean Grill). The falafel was suitably moist, crunchy and the pickle spear (pickled at the restaurant) added a sour crunch. Though the tahini was lacking, I could have just as easily added our order of the fried eggplant to thicken up this wrap.

BR: Thanks to our neurotic questions, atypical requests (one sandwich for two people at 4 p.m., please) and tabletop tinkering with a DSLR, our friendly server at caught onto our falafel taste-test and calmly asserted that theirs would win top honors. And, in my opinion at least, he was right. Although filled to a somewhat modest capacity, the flavors and textures were balanced, spot on and ultimately more satisfying than others about town. 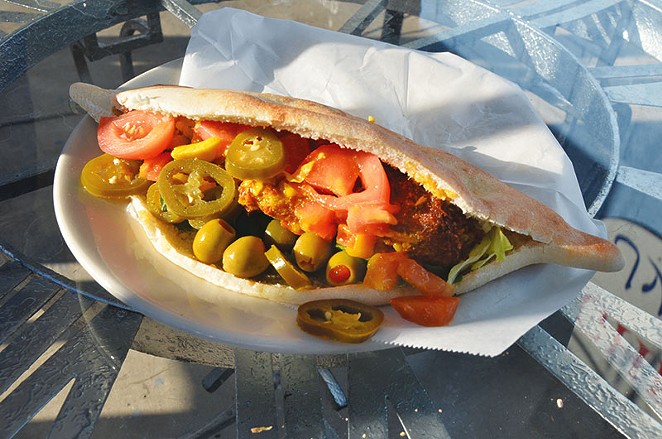 RB: We weren't necessarily going to do this one, but it is distinctive. The loaves are split the long way for filling (this is not a wrap) — and they do a unique, sourish mango sauce that must use a lot of turmeric — not to mention green mango? The frying takes place just behind the counter, so this is the most street-food-like in that respect. Other accompaniments include lettuce, sliced tomato and sliced cucumber — no pickle and no observable tahini. These coarsely textured balls of falafel appear to have been flattened before frying; they remain moist and crunchy. The mango sauce is unique, to be sure (they included a small container of it), but I might have preferred a maharmara — or one of Weissman's.

JE: This iteration gets points for the amount of veggies thrown in the mix. During my visit with Bryan, the greenery included bell peppers, thick tomato slices, pickled jalapeños (a South Texas version, perhaps?) and Spanish olives. While the turmeric-laden sauce — no name was given, but we learned it's also used in their barbecued fish — would benefit from a lighter touch. The oval Iraqi bread, or samoun, is baked in house. Would definitely eat anything else sandwiched between this loaf.

BR: I photographed all four of the sandwiches in this spread (pretty much) as they're served and Baghdad's — spilling with a colorful mix of veggies — was easily the most photogenic. Sturdier than some, their choice of Iraqi bread makes a user-friendly vehicle for the nicely seasoned falafel and its fixin's. The sandwich's hard-to-define, mustard-yellow sauce adds intrigue at first but leaves a slightly overpowering aftertaste that distracts from the main attraction. 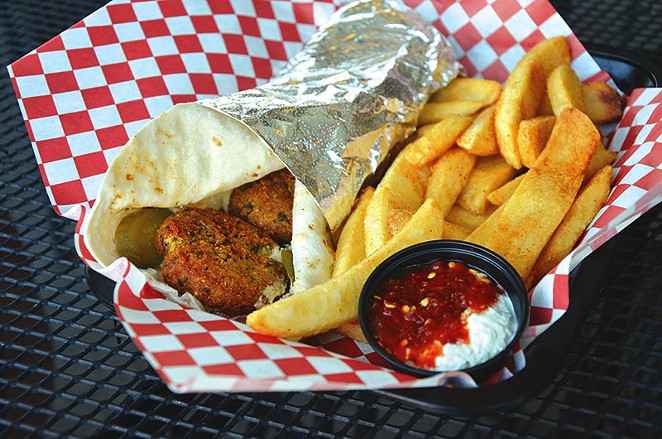 RB: At around 1 p.m. on a Saturday afternoon, there was a smattering of hubbly-bubblers on the covered patio — so I chose indoors. The falafels come both as an appetizer and as a plate with fries, plus extra pickle and tomato slices. The wrap, cut across the middle, has been seriously flattened and toasted panini-style; it's much toastier than any of the others. And it appears the falafel balls inside get flattened in the toasting process. These balls are composed of fava, wheat and chick pea, they're crunchy and appealingly moist. But a single falafel, still ball-shaped, that was served as a kind of accessory on top of the flattened wrap, was especially delicate and flavorful — the best single ball, I'd say. Accessories inside include tomato and, uniquely, hummus — I prefer this to a wimpy tahini. The pickles could use help, however. Weissman's are way better.

JE: Naara's take wins if we're only considering portability. It's easily the neatest wrap of the lot, but what it makes up for in transportability, it lacks in oomph. The falafel, at least during our visit, could have been chewier, but I did appreciate the added hummus spread. The bread, we're guessing, is a lavash brought in fresh from neighboring Ali Baba that tastes more like a tortilla than traditional pita.

BR: At first glance, Naara's falafel wrap could pass for a flattened burrito. And presented as it is with rough-cut fries dusted with paprika, the combo reads as bar food — the most Americanized presentation in this admittedly limited bunch. Yet Naara's falafel has a classic taste and texture and the tortilla-like wrapper adds lightness and big portability points. (If you're looking for a road-trip falafel, this is it.) Bonus: The accompanying tzatziki/hot sauce dip duo works surprisingly well on those fries. 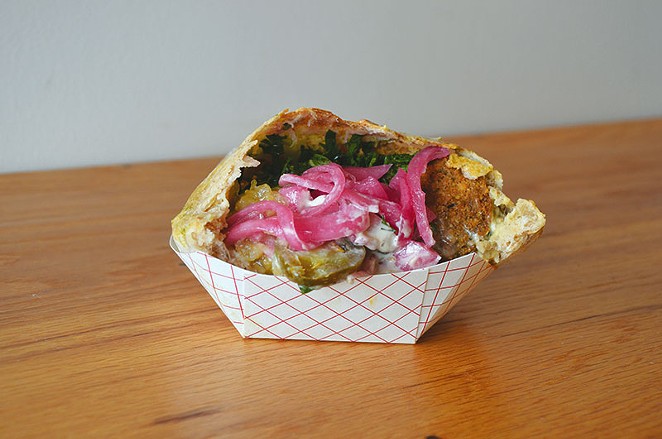 RB: Weissman's balls (Editor's note: Phrasing!) are the least of it here for me — after tasting all the others, I think the texture/grind may be too fine. But the fresh-from-the-oven whole wheat pita wins, the pickles are great, and if used with discretion, many of the add-ins can work. My solution would be to order a plate with a pita on the side, and perform a stuff-it-yourself ritual with select sides such as the pickle, marinated onion, hummus, babaganoush ... just not all of it at once as Weissman seems to prefer. Of course, this would be hard if taking to go in true street fashion — don't know how his normal to-go pitas are packaged.

JE: Fuck discretion, but do grab as many paper napkins as possible. The roll at the table is an outfit saver, though I'm pretty sure I had tahini in my hair by the time we left. The balls seemed scooped as one would a tray of cookies, but could have used a quick smash. Otherwise, pack in the great add-ons — roasted red pepper hummus, chunky pickles, all the red onions — and get to work.

BR: Moshe's takes the street-food staple to a higher culinary level — thankfully without turning it into something obnoxious. Here, a neatly arranged assortment of colorful (but unlabeled) add-ons can lead to an adventurous (and potentially quite messy) bite. On our visit, the falafel — slightly mealy and possibly a bit too large — took a back seat to the house-baked pita and veggie-friendly spread of accouterments.

Price point: $7 for a golden falafel