A Wrinkle in Time, Gringo and Strangers Sequel No Reason to Visit Theater This Weekend

Unless you plan on heading to the Santikos Bijou to see the Academy Award-winning Chilean film A Fantastic Woman, use this weekend to catch up on some Netflix stuff in your queue. Here are reviews of three of the four mainstream movies hitting San Antonio theaters Friday. Entertainment Studios Motion Pictures didn’t screen The Hurricane Heist for critics.

A Wrinkle in Time 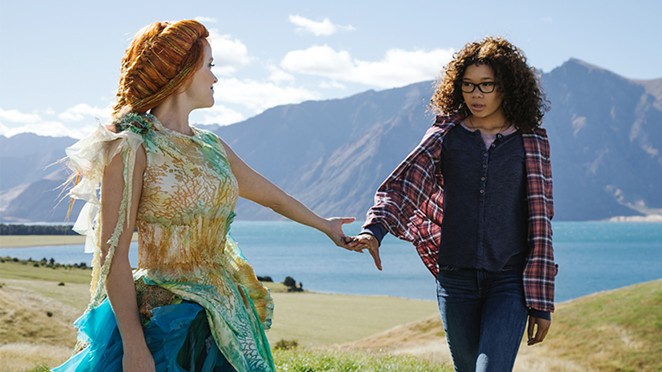 Walt Disney Pictures
Adapted from the 1962 fantasy novel by Madeleine L’Engle, the cinematic version of A Wrinkle in Time is a massive mess. It’s unfortunate, especially since rising filmmaking star Ava DuVernay (Selma), who is breaking barriers for women of color behind the camera, will have to chalk this one up as her first dud in a young but impressive career that started with the 2012 award-winning sleeper drama Middle of Nowhere. A Wrinkle in Time is a convoluted fairy tale that attempts to turn its nonsensical narrative into something compelling. Sadly, the story, which was considered by many in the industry to be unfilmable (so was Life of Pi, and that turned out brilliant), is a bad combination of technobabble plotting, underwritten characters and overdone and unrealistic CGI effects. When scientist Mr. Murray (Chris Pine) finds a wormhole allowing him to time travel billions of light years, he makes the leap, but gets lost for four years somewhere, we suppose, in all the wrinkles. When his daughter Meg (Storm Reid) finds out she is the only one that can bring him home, she makes a journey to find him inside the depths of time with her little brother, friend and three enchanted beings – Mrs. Whatsit (Reese Witherspoon), Mrs. Who (Mindy Kaling) and Mrs. Which (Oprah Winfrey). Far from a future classic, A Wrinkle in Time will be relegated to the category where forgotten fantasy family fare like The Adventures of Sharkboy and Lavagirl takes up space.

STX Entertainment
It’s been a decade since filmmaker Nash Edgerton, brother of actor/director Joel Edgerton (The Gift), released his first feature film, The Square, an exciting Australian crime drama that finds a unique way of telling a typical bag-of-money story without going through the same tired tropes (it’s comparable to 1998’s A Simple Plan). With Gringo, Edgerton, even with an impressive cast, which includes his brother in a lead role, can’t recapture the same kind of thrills his debut movie provided. Leading the way is actor David Oyelowo (Selma) as Harold, a mid-level manager who fakes his own kidnapping in Mexico while helping his horrible bosses Richard Rusk (Joel Edgerton) and Elaine Markinson (Charlize Theron) close a deal on a marijuana pill that could make their pharmaceutical company tons of cash. The biggest problem with Gringo is that there are far too many unnecessary subplots, which the weak narrative can’t support. Plus, besides Harold, the majority of the characters are so unlikeable, it’s impossible to invest much into them. If the dark comical personality traits of Richard and Elaine worked better, it would be a different story, but none of what they do or say feels authentic or even satirical enough to keep the film’s tone from going off the rails. Gringo definitely has a nasty streak, but Edgerton and crew fail to make it cut deep enough.

The Strangers: Prey at Night

Aviron Pictures
Pulling the curtains back from inside your home to find a masked individual looking back at you would be a scary situation for anyone. It’s a visceral idea that has been explored before in many horror films, including the original 2008 thriller The Strangers, which managed to feature a few distressing moments for Liv Tyler as she is stalked at her house by a trio of disguised killers. The sequel, The Strangers: Prey at Night, however, removes the stalked prey (in this case a family spending the night at a trailer park) from the confines of their safe space and thus turn the frightening scenario of a home invasion into a conventional slasher movie where everyone runs around while the killers walk menacingly and wield kitchen knives and drag axes on the ground. If anything, Prey at Night is an opportunity for talented 18-year-old actress Bailee Madison (Bridge to Terabithia, TVs’ Good Witch), who has been in the business since she was six, to shed her good-girl image like most actors do around this age if they want to show their range. At least we know now that Madison can play an angsty teen and scream her lungs out.