'Anything for Selenas!' Actor Erick Carrillo Looks Back on His Role as 'First Cholo' in 1997’s Selena

On March 13, 1997, actor Erick Carrillo wasn’t standing on the red carpet at the Hollywood premiere of Selena, the biopic on late Tejano superstar Selena Quintanilla. Nor was he posing for photos with actress Jennifer Lopez and director Gregory Nava or rubbing elbows with celebrities like Will Smith and his soon-to-be-wife Jada Pinkett, who were in attendance.

Yes, Carrillo was part of the cast of Selena, and he would have loved to have been at the premiere that evening. The problem was, he just wasn’t invited.

"They didn’t think my role was big enough, so they didn’t ask me to come," Carrillo said. "I was like, 'That’s cool. I didn’t expect it anyway.'"

Carrillo would probably have had his very own red carpet rolled out for him at the premiere had everyone known just how popular his small, scene-stealing role would become in the two decades since.

In Selena, Carrillo portrays the character referred to in the script as "First Cholo," one of the two "cholos" who tries to pull Selena’s tour bus out of the mud with a 1969 Chevrolet Impala. After their lowrider is damaged during the attempt, First Cholo delivers two of the most famous bits of dialogue in the movie: "This bumper was pulled off by the bus of Selenas" and the even more iconic, "Anything for Selenas!" 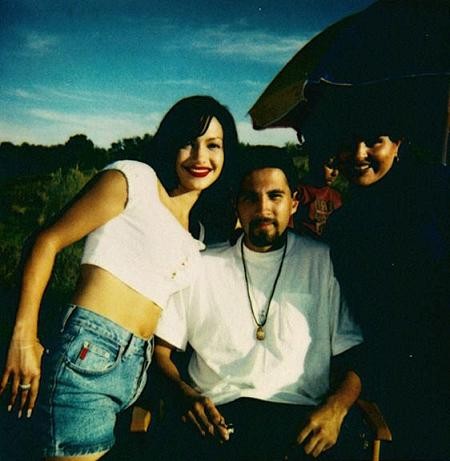 Carrillo saw the same thing. However, during his audition for the role at a hotel in Dallas, he admits he initially read his lines like the stereotypical gangster characters he had seen dozens of times before in Hollywood movies.

"I started to imitate those fake cholos, even though I knew it wasn’t natural," says Carrillo, who was 23 at the time. "Up to that point, all the cholos I had seen on TV and in movies had been hard-core cholos, so I thought that’s what they wanted." He remembers casting director Roger Mussenden pulling him to the side to give him some advice.

"He said, 'Look Erick. Put down the script and just do it the way you would do it,'" Carrillo recalls. "Looking back now, I know he was giving me permission to do it the way it was actually designed. No one had ever seen a cholo like that before — like a real one."

After the audition, Carrillo went back to his hometown of El Paso to spend time with his family. At that point, he didn’t know if he had landed the role. A few days later, his agent called him and told him the filmmakers wanted to see him again in San Antonio. Carrillo thought he was going in for a second audition. Little did he know, he had already been cast and that they were bringing him in again to read with different actors auditioning for the role of "Second Cholo."

"When I got there, I met [director] Greg [Nava] and he told me to do it exactly the way I did it in my audition," Carrillo says. "I did my lines with, like, three other cholos and that was it."

Carrillo also remembers the first time he met Jennifer Lopez. It was during rehearsals in San Antonio. This, of course, was before Lopez was known by her nickname J.Lo. Carrillo said when Lopez walked into the room, he saw a "very beautiful woman," but adds that, "she didn’t blow me away any more than a lot of other beautiful Latinas I knew."

Asked if J.Lo blew him away with her Super Bowl performance early last month, Carrillo didn’t hesitate to answer. "Are you kidding me?" he says. "Anyone who looks like that at that age would blow me away."

Although Carrillo wasn’t invited to the Hollywood premiere of Selena, he was invited to the one in San Antonio. The first time he saw his scene on the big screen, he was surprised at how well the audience reacted to it. Since the film’s release in 1997, Carrillo says the legendary status of his role has grown every year. He says it’s been surreal over the years to see people wearing shirts with "Anything for Selenas" printed on them or to hear a DJ at a club randomly say the line.

"I was working as a waiter in Dallas years ago and the people coming into the restaurant were saying, 'Anything for Selenas,'" Carrillo shares. "Here I am waiting on these people and they didn’t even know it was me and they’re saying my line!"

Today, Carrillo lives with his wife and three kids in Los Angeles and is still working in the industry as an actor, writer and producer. His most recent project is the bilingual YouTube web series Sin Vergüenza. His advice to other young actors hoping to break into Hollywood is simple: to trust in their talent and just be themselves.

"Everyone will get a shot," he shares. "It’s what you do with it that’s going to matter. Be authentic. That’s what got me the role in Selena."

This interview first ran at Remezcla.com.