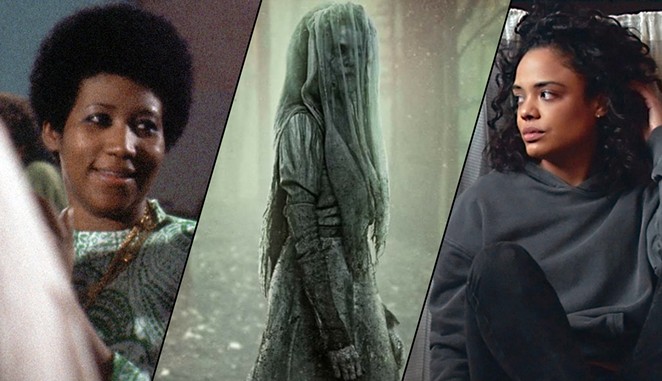 Here are a few short reviews of movies that will be released at San Antonio theaters or on VOD platforms from April 19-23. 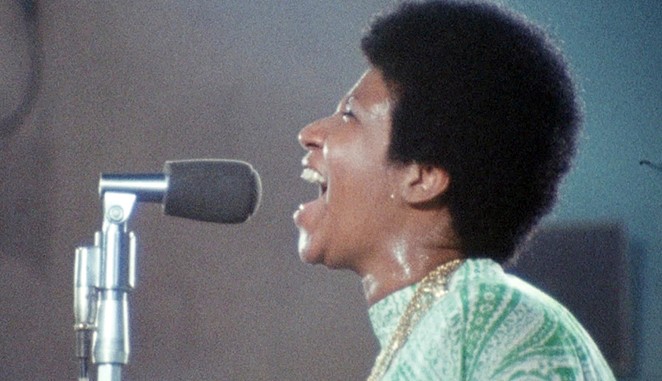 Neon
Amazing Grace
In 1971, after legendary singer Aretha Franklin had already recorded hit songs like “Respect,” “(You Make Me Feel Like) A Natural Woman” and “Think,” she decided to record a live album at the New Temple Missionary Baptist Church in Los Angeles with the Southern California Community Choir as her backup singers. The spirited, two-night recording session was documented by late filmmaker Sydney Pollack, who had yet to make the films he is known for today, including Tootsie and Out of Africa . The recording would become Franklin’s Amazing Grace , the best-selling gospel album in music history. Pollack’s film, however, because of technical difficulties, was never released. When technological advances afforded producers the ability to correct the errors years later, Franklin herself refused to sign off on the documentary’s release. When the Queen of Soul died last year, her niece Sabrina Owens, the executor of her estate, gave original producer Alan Elliott permission to finally release the footage. What audiences are given is a magnificent concert film that captures the pure talent and raw emotional power of Franklin’s music. As a documentary film, Amazing Grace features no interviews, no behind-the-scenes footage of how the recording session came together and no words from Franklin herself besides the ones she pours into the microphone during her performance. But with Franklin, that’s all anyone really needs. Amazing Grace opens exclusively at the Santikos Bijou April 19 .
3.5 stars out of 5 stars

Good Deed Entertainment
Breaking Habits
Sister Kate, the main character in the documentary film Breaking Habits , is the kind of liberal protagonist who is easy to root for – this despite the fact that she’s really not the nun the film would like you to believe she is. Without a cloistered hero leading the way, writer/director Robert Ryan’s doc, at face value, is automatically less intriguing. Unfortunately, Sister Kate is really Christine Meeusen, the owner of a medical marijuana company and weed activist, who dresses like a nun as a gimmick, although in the film she argues that she is still part of a “sisterhood” made up of her and her other employees. It’s a smart marketing ploy that lands her on the radar of anti-drug lawmen like the sheriff of her small town who believes pot leads to very bad things. Despite some of the quirky asides delivered by Sister Kate, Ryan has difficulty pulling the narrative together into one cohesive concept. He does, however, want to make sure audiences know being 420-friendly is the only way to fly. With some awkward narration throughout the film, which Ryan seems to have written for Sister Kate to read, Breaking Habits would have worked better as a magazine profile or the inspiration for a Planet K t-shirt logo. Breaking Habits hits VOD platforms April 19 .
2.5 stars out of 5 stars

The Curse of La Llorona

Warner Bros.
The Curse of La Llorona
To expand on the popular Conjuring Universe, producer James Wan and director Michael Chaves, who will helm The Conjuring 3 next year, have pulled into their horror franchise The Curse of La Llorona , Hollywood’s first real attempt at transforming the legendary Mexican folktale into a cinematic story of substance rather than just a cheap and basic ghost story. The film follows Anna Tate-Garcia (Linda Cardellini), the widowed mother of two children who are being stalked by the title character, a weeping entity in search of her children she drowned generations ago. Recruited to help Anna cleanse her home and soul is Rafael Olvera (Raymond Cruz), a local curandero (traditional healer) who joins Anna and her family in a fight against the evil that is trying to destroy them. Little cultural context is given to the Llorona character, and screenwriters Mikki Daughtry (Five Feet Apart ) and Tobias Iaconis (Behind Enemy Lines: Colombia ) don’t seem too interested in exploring the cultural aspects of the story aside from introducing a character like Rafael and arming him with crosses, sage and raw eggs to battle the evil presence surrounding the family. Without using La Llorona to their advantage in the storytelling, Daughtry and Iaconis reduce her to another generic monster-in-the-closet character who relies on dull CGI effects and jump scares to force its audience to flinch on command. Why bother to write a script based on a historic folktale when the history is ignored altogether? The Curse of La Llorona opens nationwide April 19 .
1.5 stars out of 5 stars 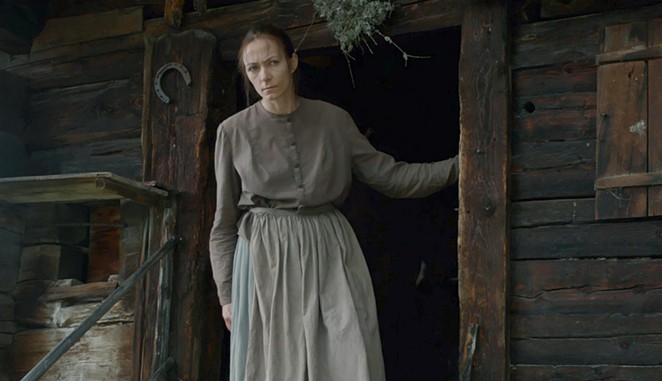 Doppelganger Releasing
Hagazussa
Be forewarned: Hagazussa , a German/Austrian horror movie production, is not for the faint of heart. In fact, if you’re a horror movie fan and thought 2018’s Hereditary was too unsettling, Hagazussa will make those bird and child decapitations look like scenes from a Disney movie. Reminiscent in tone and gothic atmosphere of the 2015 horror folktale The Witch , Hagazussa is an art-house nightmare that will linger in your head long after the credits rolls. The film follows Albrun (Celina Peter as a child, Aleksandra Cwen as an adult), a young woman living in the Austrian alps in the 15th century, who as a child witnessed the mysterious and deeply disturbing death of her demonic mother (Claudia Martini). Now grown, Albrun must carry the weight of her dead mother’s reputation. Everyone in her village labels her a witch, too, and shuns her into a lonely existence with only her infant to keep her company. Her decent into madness is a slow burn and writer/director Lukas Feigelfeld (Interferenz ) uses every dialogue-less moment to build up the tension in some petrifying ways. Who could have guessed that when The Curse of La Llorona – a film born from the legend of a mother who drowns her children – hit theaters, it wouldn’t feature the most shocking child-murdering scene of the week? Hagazussa hits VOD platforms and DVD/Blu-ray April 23 .
3.5 stars out of 5 stars

Neon
Little Woods
Written and directed by first-time feature filmmaker Nia DaCosta, who has already been tapped to remake the 1992 horror movie Candyman for next year, Little Woods is its own special treat. Although a familiar story, it does what a film like 2016‘s Oscar-nominated Hell or High Water did by taking a conventional idea (in Hell or High Water ’s case, a couple of bank robbers running from a sheriff) and turning it into something distinctive and memorable. DaCosta doesn’t quite reach that same level, but her script emerges as much more than an average drug-trade drama. The film – a modern Western of sorts – stars Tessa Thompson (Creed) as Ollie, a former drug dealer living in a small oil town in North Dakota, who is trying to get her life back on track. But with bills piling up and her sister Deb (Lily James) in trouble, Ollie must break a promise to herself and return to her life of crime, so she can provide for her family. Little Woods lives on the same fringes of society as its characters – the forgotten working class of America that is tired of being pushed aside for the shinier object. Still, as long as independent, female-driven films like Little Woods , 2008’s Frozen River and 2010’s Winter’s Bone , continue to find ways to get produced (and as long as stars like Thomson and James don’t get lost in the Hollywood machine), storytelling like the kind found in Little Woods, no matter how many times a narrative is reinvented, can always feel fresh when it’s nurtured by the right hands. Little Woods opens exclusively at the Santikos Bijou April 19 .
3.5 stars out of 5 stars 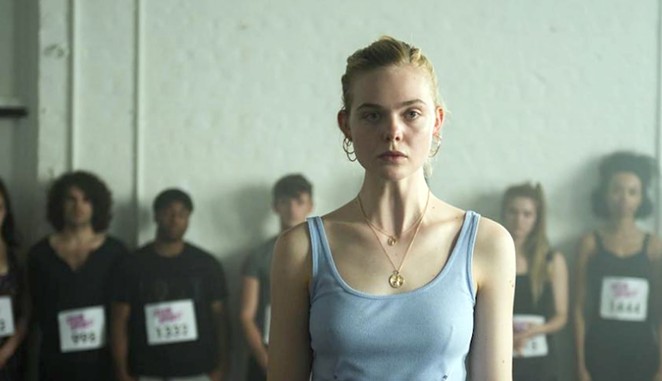 LD Entertainment
Teen Spirit
Actor Max Minghella (The Social Network , TV’s The Handmaid’s Tale ) makes his directorial debut with Teen Spirit, a mostly satisfying albeit recognizable musical drama that also feels like a satire on the current state and overabundance of TV reality show competitions. The film stars Elle Fanning (The Beguiled) as Violet Valenski, a shy Polish teenager who dreams of becoming a pop star and escaping her life of poverty. She gets that chance when the popular singing competition Teen Spirit holds auditions in her small town. Without the support of her mother, Violet turns to an adult stranger, Vlad (Zlatko Burić), a washed-up opera singer, to serve as her guardian and guide her through the cutthroat nature of the industry. Minghella creates a magnetic setting for Fanning to experiment on as an ambitious songstress, but her student-mentor relationship with Vlad lacks the emotional connection needed to make Teen Spirit feel completely relevant. Fanning, however, is believable as an impressionable talent that the music industry probably couldn’t wait to get its hands on. In that sense, Teen Spirit, despite its hopeful approach to Violet’s rise to fame, is a heartbreaking story, too. Teen Spirit opens at the Santikos Palladium, Santikos Silverado, Regal Cielo Vista and Regal Alamo Quarry April 19 .
3 stars out of 5 stars