Cinematic Spillover: Short reviews of Irresistible, My Spy and Force of Nature 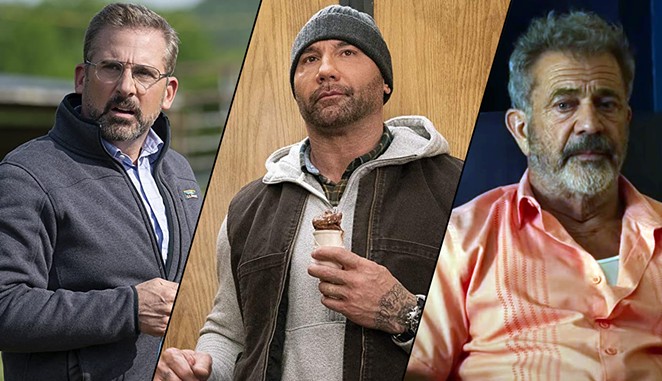 In fact, with COVID-19 peaking in many states, Hollywood studios in the last few weeks are continuing to push their most anticipated features of 2020 farther and father down the schedule. For example, Christopher Nolan’s spy film Tenet has now been delayed twice, and it doesn’t seem like anyone in the industry is confident that it won’t be postponed again.

However, new films are still hitting VOD and other platforms weekly. Here are reviews for three new movies, including one that is playing at those San Antonio theaters currently open for business. Wear a mask.

Latino Twitter blew its top last month when the trailer for the action flick Force of Nature hit online. Folks called it tone deaf because it's set in Puerto Rico and uses a devastating Category 5 hurricane, much like 2017's Hurricane Maria, as its backdrop. It was also criticized because, from the trailer, it looked like all the bad guys were portrayed as Latinos and all the good guys were white characters. Quick note: This is untrue since Peruvian actress Stephanie Cayo stars in the film as one of the main protagonists. Controversy aside, Force of Nature is a bit of a wet blanket. Directed by Michael Polish (The Astronaut Farmer), the movie, which contrary to popular belief is not led by Mel Gibson, is about as generic and predictable as a heist flick can get. Emile Hirsch (Once Upon a Time... in Hollywood) and the aforementioned Cayo (Netflix’s Club de Cuervos) star as two police officers in Puerto Rico who go into an apartment building to evacuate residents who refuse to leave despite a fast-approaching hurricane. One of the holdovers is Ray (Gibson), a hardened, former police detective who won’t listen to his daughter Troy (Kate Bosworth) and leave the area. It turns out that the inclement weather is the least of everyone’s problems when a criminal syndicate led by cold-blooded killer John the Baptist (David Zayas) infiltrates the complex to track down a trove of priceless artwork. Guns blaze and punches fly, but this storm simply doesn’t surge. Force of Nature is available on VOD platforms June 30.
2 out of 5 stars (not recommended)

Political satire might have seemed like the perfect genre for someone like actor and comedian Jon Stewart to tackle, but as the writer and director of Irresistible, the former host of The Daily Show delivers the cinematic equivalent of a landslide defeat. Picking up right after Donald Trump’s shocking victory in 2016, an event that Stewart accurately expresses on film as a cannonball to the gut, the film takes audiences behind the scenes of a smaller race that somehow captures the attention of a pair of political strategists from Washington D.C. Oscar nominee Steve Carrell (Foxcatcher) stars as Gary Zimmer, a high-profile Democratic tactician who travels to Wisconsin to talk a progressive-leaning veteran (Chris Cooper) into running for mayor of his small, working-class town. Zimmer's goal is to help the Democratic Party return to winning over Heartland voters. When his Republican counterpart Faith Brewster (Rose Bryne) gets wind of his plans, she heads out to the Badger State herself to put her time and energy behind the town’s incumbent, conservative mayor. Unfortunately, none of the entertaining snark, sarcasm and cleverness that Stewart became known for during his 16 years on The Daily Show manifests itself in the pages of his screenplay, which, in the age of Trumpism, should have been bursting at the seams. Stewart is attempting to say something about the iniquity that happens when big money is injected into politics, but the messaging is as aimless as a Trump campaign rally speech. It also didn’t help that as adversaries, Gary and Faith are the same unlikeable, phony characters, which makes it impossible to feel much of anything for either. By the time Stewart throws in a ridiculous curveball to wrap everything up, all interest has already waned. Sadly, Stewart lets down his constituency. Irresistible is opening at local theaters and also available on VOD platforms June 26.
2.5 out of 5 stars (not recommended)

With a pair of Guardians of the Galaxy movies and a few high-profile projects like Spectre and Blade Runner 2049 under his powerlifting belt, former WWE wrestler Dave Bautista has become one of the top three pro-wrestlers-turned-actors to hit the big screen in the last few years. Dwayne Johnson and John Cena still have the edge on him, but Bautista is making his move for second place with an upcoming GOTG flick and the highly anticipated sci-fi remake of Dune. Like Johnson and Cena, however, Bautista’s cinematic record isn't without many crushing defeats. My Spy is far from the embarrassing loss he experienced with last year’s inept comedy Stuber or the handful of straight-to-VOD junk he does, but it’s still a mark in the loss column. We’ll call it a split decision, but only because of the overwhelming charm of child actor Chloe Coleman (TV’s Big Little Lies). She deserved a better movie. Bautista stars as a CIA operative who's forced to cut a deal with a kid (Coleman) when she finds out he's on an undercover mission in her apartment building. Directed by Peter Segal (50 First Dates), there are a few scenes that work surprisingly well between Bautista and Coleman, but when you’ve seen one movie where a hulk’s heart softens at the hands of a precocious kid, you’ve seen them all. My Spy is available on Prime Video June 26. 2.5 out of 5 stars (not recommended)