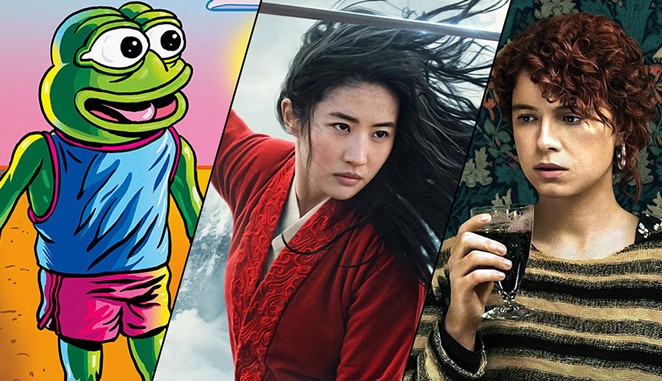 Ready Fictions, Disney Studios and Netflix
After nearly two months of having its theatrical release postponed because of COVID-19, filmmaker Christopher Nolan’s long-awaited sci-fi thriller Tenet, which was originally scheduled to hit screens in mid-July, is finally here and projected to make at least $35 million from now till Labor Day. Pandemic be damned, amirite? We jest. Be smart and wear a mask if you make your way to the theater this weekend. Tenet star Rob Pattinson would tell you the same thing, since he tested positive for the virus. But we digress. We haven’t seen the movie anyway. Warner Bros. didn’t screen the film for local critics, although this critic would have skipped a pre-screening out of an abundance of caution. We’ll try to catch the film at the drive-in this weekend and have a review for you next Friday. Until then, here are a handful of capsule reviews for movies that opened this week on Netflix, Disney+ and VOD platforms. Be safe, moviegoers.

The internet is a dark and deranged black hole where happiness goes to die. From an artistic perspective, no one knows this as well as comic book creator Matt Furie. In 2005, Furie created Pepe the Frog, a green anthropomorphic frog with bulging eyes, as a character for an independent comic he was working on. Before he knew what happened, Pepe became a popular meme across social media and was eventually hijacked by white nationalists who transformed Pepe into a symbol of racism and hate. In the documentary Feels Good Man, first-time director Arthur Jones dives deep into the fringes of the internet where Pepe started his fascinating evolution from carefree cartoon to alt-right amphibian. The true story is bizarre, funny and terrifying, and Jones manages to take all these elements and form something wholly entertaining. Feels Good Man is available on VOD platforms and is currently playing at the Alamo Drafthouse Stone Oak. 3.5 out of 5 stars (recommended)

In the long, rambling opening sequence of the dramatic oddity I’m Thinking of Ending Things, Jake (Jesse Plemons), one of the main characters in the film, tells his unnamed girlfriend (Jessie Buckley), who is also the narrator, that “It’s good to remind yourself, the world’s larger than the inside of your own head.” For better or worse, nothing could be farther from the truth if said head belongs to director and Oscar-winning screenwriter Charlie Kaufman (Eternal Sunshine of the Spotless Mind). In only his third film as a director, Kaufman undoubtedly revels in the idea of making his singular vision come to life by himself. In Kaufman’s best work of his career, he allows directors like Spike Jonze (Being John Malkovich and Adaptation) and Michel Gondry (Eternal Sunshine of the Spotless Mind) to take the helm of his narrative. But when Kaufman is calling the shots, things get a lot more frustrating and pretentious. Kaufman can grandstand with the best of them, and ITOET is, at least, imaginative and substantially more original than anything you’ll likely see this year. But like his earlier films Synecdoche, New York and Anomalisa, viewers’ reaction to ITOET will probably be based on how much of his enigmatic ideas they’re willing to spend their time untangling. We’ll award points to the incredible ensemble cast of Buckley, Plemons, David Thewlis and Oscar-nominee Toni Collette for making ITOET almost weirdly watchable. I’m Thinking of Ending Things debuts on Netflix September 4. 2.5 out of 5 stars (not recommended)

Of the 12 live-action remakes that Disney has produced over the last decade, Mulan is easily the least Disneyesque of the bunch. That’s not to say the reimagining of the 1998 animated feature is not a beautiful spectacle to behold. Time and time again, the studio has proven its technical prowess — from the exquisite costuming in 2015’s Cinderella to the stunning visual effects of 2016’s The Jungle Book to the opulent set decoration of 2017’s Beauty and the Beast. Mulan is no different. Visually, it’s breathtaking. Narratively, it’s mostly uninspired, but meets the requirements of a standard screenplay. What’s unknown yet is the rewatchability factor of a Disney movie as serious as Mulan from a kid’s viewpoint. Families will likely pay the extra $30 to see the film on Disney+, but is it something children will want to revisit again with the same eagerness they might exhibit before an initial viewing? Probably not. In this version of Mulan, there is no singing, although portions of the score are inspired by music from the original animated film. Also, all the talking creatures from the cartoon have been scrapped, including fan favorite Chinese dragon Mushu. What director Niki Caro (McFarland, USA) and team have ultimately created is an effective, PG-13-rated war movie for kids. There are a lot of battle scenes, which are all bloodless, of course. If anything, it might spur some preteens to learn more about the history of ancient China. More importantly, an Asian heroine like Mulan, and what her character means to young viewers of mainstream cinema, should never go unrecognized. Mulan debuts on Disney+ (Premier Access) September 4. 3 out of 5 stars (recommended)

As a heartfelt tribute to late comedian and actor Robin Williams, the documentary Robin’s Wish does exactly what it sets out to do. Not only does it remind viewers of how ridiculously talented Williams was and the impact he had on the entertainment industry, the film also makes sure to explain why Williams’ life ended so abruptly at the age of 63. While most people are aware that the cause of his death was suicide, Robin’s Wish explains how the neurodegenerative disorder Lewy body dementia, which was not detected in Williams until his autopsy, was the reason the Oscar winner took his own life in 2014. Through touching interviews with friends, colleagues and his wife Susan, director Tylor Norwood (The United States of Detroit) brings to light the harrowing final days of the most animated performer in comedy history. Robin’s Wish will not be the definitive documentary on Williams’ remarkable life and career, but its message is clear, and Norwood delivers it with insight and compassion. Robin’s Wish is available on VOD platforms. 3 out of 5 stars (recommended)