Cinematic Spillover: Short reviews of Space Jam: A New Legacy, I Carry You with Me and Die in a Gunfight 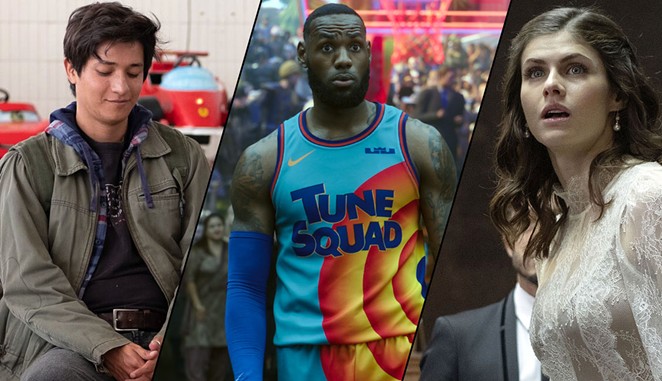 Were you a fan of the original 1996 Space Jam starring Michael Jordan? If you were, the sequel with LeBron James could be enough to let the nostalgia wash over you. Be sure to check out our interview with actor and comedian Gabriel Iglesias, who voices Speedy Gonzáles in the movie. Along with the live-action/animated hybrid, we have reviews of the Spanish-language drama I Carry You with Me, which won a couple of awards at last year’s Sundance Film Festival, and the action flick Die in a Gunfight starring Diego Boneta (Terminator: Dark Fate) and Alexandra Daddario (San Andreas).

Even if the average viewer doesn’t usually catch them, product placement in movies can get ridiculous at times. For example, most people only remember the dinosaur action sequences in Jurassic World, but go back and count how many scenes look like commercials for Mercedes and you’ll get the idea. As many instances of in-your-face-marketing there have been in recent cinematic history, Space Jam: A New Legacy says, “Hold my beer.” Actually, it would say, “Hold my butterbeer,” since Warner Bros. owns the Harry Potter franchise and would want to reference the wizardly drink if it had the chance. If you didn’t know that about Warner Bros., the Space Jam sequel has no problem in reminding you about all the entertainment properties it has the rights to. It’s one big, clumsily curated infomercial for the studio that wears thin very quickly. Aside from that, the script, which was written by six different screenwriters, is the basketball equivalent of an airball from the free-throw line. It’s that embarrassing. In some circles, NBA superstar LeBron James might be considered the GOAT, but at the end of the day, Space Jam: A New Legacy will end up being as fondly remembered as Shaquille O’Neal’s Kazaam and Metta World Peace doing the cha-cha on Dancing with the Stars. Space Jam: A New Legacy is currently playing at theaters and streaming on HBO Max. 1 out of 5 stars (not recommended)

I Carry You with Me

Based on a true love story between two Mexican men – aspiring chef Iván (Armando Espitia) and teaching assistant Gerardo (Christian Vázquez) – the drama I Carry You with Me is an honest and endearing romance that speaks on everything from the American Dream to machismo to the unfair immigration system in the U.S. In the film, Iván makes the difficult decision of leaving his young son and Gerardo behind in Mexico and migrating to New York City to become a chef. Oscar-nominated documentarian and first-time feature director Heidi Ewing (Jesus Camp) blends a beautiful narrative with real-life subjects to capture a story that is alluring an emotionally rich. I Carry You with Me is currently playing at the Santikos Embassy Theater. 3.5 out of 5 stars (recommended)

Die in a Gunfight

Director Collin Schiffli (All Creatures Here Below) and co-writers Andrew Barrer (Ant-Man and the Wasp) and Gabriel Ferrari (Ant-Man and the Wasp) are obviously going for style points in the action flick Die in a Gunfight. Set up like a modern-day Romeo and Juliet-style love story, the film follows Ben (Diego Boneta) and Mary (Alexandra Daddario), two star-crossed lovers whose fathers are bitter rivals in the media industry. The movie presents itself as this slick, attention-grabbing thriller, but it’s all so artificial and not nearly as clever as it thinks it is. This is the kind of movie where the director is likely to say something like, “I made this for audiences, not for critics.” Yeah, no kidding. Die in a Gunfight is currently streaming on VOD platforms. 1.5 out of 5 stars (not recommended)