Castro's film The Summer of Massacre featured a total of 155 dead bodies during its 98-minute runtime. 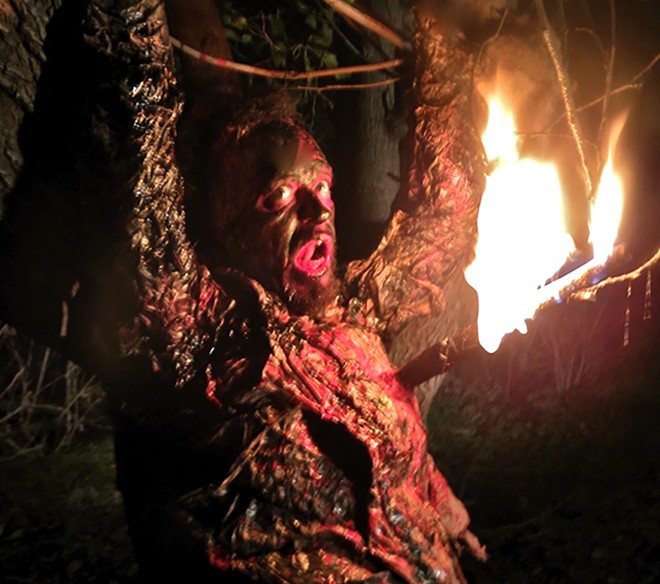 Courtesy Photo / Cinema Factory Inc.
A victim is turned into a crispy critter in The Summer of Massacre.

When special effects makeup master and San Antonio native Joe Castro started pre-production for his horror anthology film The Summer of Massacre in 2010, he wanted to do something that would make an impact on the micro-budget slasher genre.

So, even before one word of the script was written, he devised a plan to land in the Guinness Book of World Records for the Highest Body Count in a Slasher Film. In the end, The Summer of Massacre featured a total of 155 dead bodies during its 98-minute runtime, allowing him to seize that record.

And Castro, a 1988 graduate of John Marshall High School now based in LA, has held that record since 2011.

During a Halloween season-appropriate interview with the Current, Castro talked about what led him to make a movie with so many deaths, his favorite kill in the movie and his plans for the spooky season. 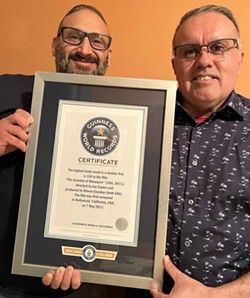 How did you come up with the idea to make a movie that would get you into the Guinness Book of World Records?

I went to a convention in the UK, and that's where the Guinness Book of World Records home offices are. Maybe it was the universe talking to me, but I was like, "I want to set a world record!" So, I bought the book and my producer [husband Steven Escobar] figured we could set the record for the highest body count. Even before I wrote the screenplay, I knew that's what I wanted. So, as I was writing the screenplay, I was devising the sequences where I could kill a lot of people.

Did the script have all 155 kills planned or did you add to it as you were shooting the movie?

No, we just kept adding on! I'd be like, "You know, it would be good if another massacre happens here." Our script was up for interpretation as we moved through it.

What percentage of the kills would you say are computer generated versus those done with practical effects?

I would say 75% of them are CGI effects, but we shot almost all of them practical first. Then, I went in and enhanced them digitally.

What's your favorite kill out of the 155?

There's a couple of them. One of them is a man who gets burnt in a fire pit. He gets rolled over and half of his head has been burnt away. It looks like charcoal briquettes when they're cooking. The inside of his head is smoldering. Then, there's also a warehouse scene where these serial killers are living, and there's a shot of like 20 people hanging on hooks. It's just so gross.

You've held this record for 11 years. What if someone comes along and breaks it?

You know, we set the bar very high when we made this. So, if someone wants to come and try to beat us, that's fantastic. But we have a contingency plan in place. It's hard to make a movie with that many kills though. I would say, "Bring it on!" I love a challenge.

It's a secret, but I'm prepared to do it when the time comes.

Your work as a makeup artist and creature designer is incredible. Why are you still working on micro-budget movies and not with a bigger studio?

This field is highly competitive. Everybody wants to make monsters. I would love to work for a special effects outlet if they'd have me. But I'm very happy doing what I'm doing. I get to be the big fish on the set. I get to have control over the design work and work with the directors and actors. I think if I worked for a big special effects house, I wouldn't have the opportunity to do that. I would be kept on a short leash.

I can't even imagine how many requests you get in the month of October every year from friends and family asking you to make them a Halloween costume.

(Laughs.) I really love making costumes for my family. I had to turn my cousin down this year because I have so much on my plate, but I do it every year. It's a very busy month for me. I get requests for everything from vampire fangs to full costumes. It can become overwhelming, but it's also a real blessing.

What are you going to be for Halloween this year, and do you have any special plans?

It's a secret, but my Halloween costume is always an extension of my true identity and personality. It's playful but it also shows the darker side of me. One year, I dressed up like an albino vampire bat. Normally, [Steven and I] go out to Santa Monica Boulevard and have dinner and then go to the parade. What I do love doing is going to get my flu shot on Halloween in costume. It always makes everybody smile. I love spreading the spirit of Halloween like that.