Die Laughing: A Spate of Evil Clowns are Joining Pennywise and the Joker to Terrorize Moviegoers 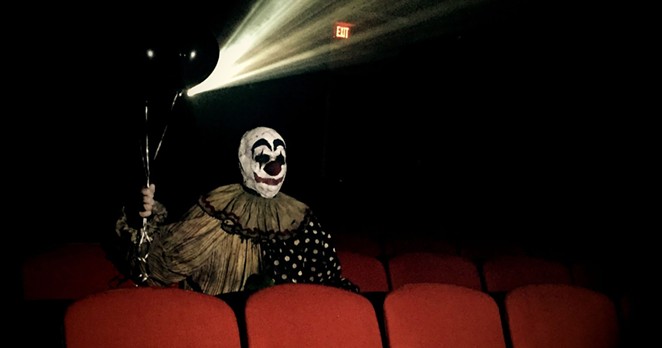 For the past 14 years, local clown Diana McCurtain-Talbert’s mission in life has been to make people laugh.

Whether it’s by making balloon animals at a child’s birthday party or performing a skit at a hospital or church, the self-described “friendly and happy clown” only wants to bring joy to the world.

Lately, pop culture has transformed clowns into something sinister. So much so, in fact, that there have been times when McCurtain-Talbert has been hired for an event but asked not to show up with her face painted.

“I have seen more scared-of-clowns behavior increase over the last few years,” McCurtain-Talbert said. “Hollywood has the potential to make anything be viewed badly.”

Clowns of America International president Glenn Kohlberger agrees. In 2014, he took issue to the inclusion of a disfigured clown in the TV horror anthology American Horror Story.

“Hollywood makes money sensationalizing the norm,” he told the Hollywood Reporter. “They can take any situation, no matter how good or pure, and turn it into a nightmare.”

While some might argue that the evil-clown archetype started on screen with the release of 1990’s It, a TV miniseries based on Stephen King’s book about a shapeshifting killer clown named Pennywise, one could go as far back as 1924, when actor Lon Chaney played an eerie-looking clown in the silent film He Who Gets Slapped.

Since then, pop culture has continued to churn out scary clowns in TV shows, movies, novels, comic books, music, video games and more. This year, Hollywood seems to have turned consumers’ fear of clowns into a full-out cinematic blitz.

Two of the most talked about movies to hit theaters in 2019 feature corrupt clowns, It Chapter Two and Joker. What’s more, a handful of low-budget horror movies about clowns have made — or will make — their debuts this year on various platforms. Look out for Wrinkles the Clown, Gags the Clown, Clown, Clownado, Clown Motel: Spirits Arise, Clownface, Clown Doll, Cleavers: Killer Clowns, Drown the Clown, Clown of the Dead, Big Top Evil and Haunt.

“I’ve always found clowns to be very interesting,” said Clownado writer-director Todd Sheets. “You can’t tell their real emotions from their faces. They are painted and kind of mysterious. I find them to be of both worlds. They’re fun and entertaining but they also have that dark side.”

Filmmaker Adam Krause found inspiration for his horror flick Gags the Clown from the real-life story of the so-called Wasco Clown, who roamed around California cities in 2014 creeping out residents.

“Somewhere along the line, the general perception of clowns went from being people who provided a silly form of entertainment to people who provided pure terror,” Krause said. “It’s the idea of the clown that many find so unsettling — the painted face, the bright clothing, the exaggerated emotions.”

Like the Wasco Clown, another real-life clown that terrorized society — although to a far greater extent — was serial killer John Wayne Gacy, who volunteered as a clown for events. Actor Mark Holton, who portrayed the killer in the 2003 horror biopic Gacy, said that although playing Gacy without clown makeup was just as terrifying as playing him with it, he understands the fear people have of clowns.

“There’s this feeling of incongruence because some parts of the clown look normal, but some do not,” Holton said. “I think some people look at the makeup and see a distortion of the facial features, which ultimately leads to an uncomfortable feeling of dread.”

Local horror author Tim Miller has written about evil clowns before in his books Welcome to Happytown, Clown Night, Coulrophobia and Clown Apocalypse, which features a female clown who slices a young girl’s scalp off and wears it as a wig.

“There is something about clowns that gives off innocence but menace at the same time,” Miller said. “I’ve often dressed as a scary clown for Halloween or comic cons. It’s just fun to see how people react. Some are fascinated and want to take pictures. Others move as far away from me as possible.”

Anthony Valadez and Kristopher Aleman are the founders of Killer Clowns from San Antonio, a cosplay group that dresses in scary clown regalia for special occasions. Although they think the quality of most clown horror movies can use some improvement, they like that filmmakers are keeping the novelty alive for genre fans.

“People who find comfort in clowns probably don’t appreciate the horror aspect,” Valadez said. “But whether they’re scary or not, clowns bring out the adrenaline in everyone. You can’t help but love them for that.”