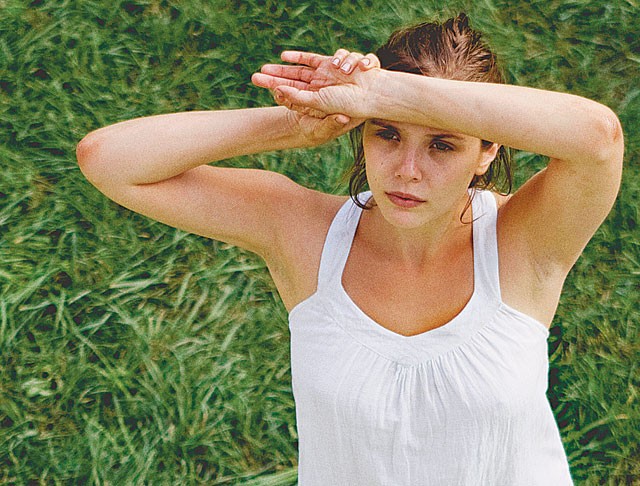 Traveling across the U.S. to promote her new film Martha Marcy May Marlene with first-time feature filmmaker Sean Durkin, actress Elizabeth Olsen said she was always shocked when moviegoers decide to share their personal experiences with her about cults. “We’ve been in nine different cities and in every single one someone has come up to us saying the movie reminded them of either their story or someone in their family or one of their closest friends,” Olsen, 22, told the Current during an exclusive interview in early September. “I didn’t realize how ubiquitous it was in our country.”

In MMMM, Olsen portrays title character Martha, a young woman who escapes a rural cult and finds refuge with her sister and brother-in-law. Even after she is seemingly safe from harm, her paranoia plays tricks on her as she dips in and out of reality.
During our interview, Olsen, who is the younger sister of former child stars Mary-Kate and Ashley Olsen (TV’s Full House), talked about how she took on such a complex character and the lack of substantial roles in Hollywood for actresses like her.

The film just never lets up on its intense and unsettling tone. Did that come out in the script when you first read it?
Yeah, the script actually had more exposition and [director/writer] Sean [Durkin] created it that way so all of us actors approaching different characters would understand fully. Most of the transitions were in there. And the tension that he created and the visuals were written out really well. Something I always remember from the script is when my character is at the lake house there is the one thing [Sean] wrote about when she looked outside and it was dark, but she felt there was a presence in the darkness. He definitely wrote all that tension within the script.

Martha is such an enigmatic character. How did you even begin to wrap your head around who she was and what you wanted to get out of her?
Funny enough, I really felt like I could relate to her. I really had a lot of empathy for her and her situation. So, the first thing I tried to do is ground her in a reality I knew as much as possible. The basic thing I tried to approach was asking what she needed that she never got in life that these people [in the cult] provided for her. And what happens when she leaves and she doesn’t have that anymore and the complications that arise with her relationship toward family and this ongoing paranoia. There were a bunch of different things I tried to stand behind. I always tried to justify and defend her actions.

Did you view the three incarnations of her as separate people?
No, I definitely looked at it as one woman going through different things.

What do you think it is that keep people in cults or communes like this?
Fear. And I think there is a feeling that people like to belong to something bigger than themselves. That’s what communities are for in towns. That’s what certain clubs and religions are for. I feel like a lot of these places provide a sense of purpose and belonging for people who maybe feel they are missing something or they never received some sort of love. That’s really important to a lot of people. I think for most people it’s a natural human instinct to do that.

Is that important to you? Have you ever been part of a group before, maybe like a sorority or something?
I haven’t, but I’ve also had the same close group of friends since I was in kindergarten. So, I’ve always felt like I had a great community. I’ve felt like I’ve always had great friends and family my whole life. At the same time, I was part of the thespian club, so you become friends with the people you create theater with in school. So, in those cases, I always felt like I was part of a community that accepted me. I don’t feel like I would be someone who could personally get involved in something like the cult that’s in the film because I feel like I receive a lot of love from the people I surround myself with.

You’ve said in other interviews that you didn’t do much research on cults. I know every actress is different in the way they want to confront a role, but do you think that is going to be a strategy as your career continues — to kind of go into a project on a clean slate?
No, actually, probably not. I’m a really academic person, so research and things like that are things I love doing. The main reason I didn’t do it was lack of time. I was cast about two or three weeks before we started shooting. (Laughs) I knew Sean had done a lot of research talking with people who had been in cults and people who have left them. I kind of relied on him if I had questions because there just wasn’t enough time to ask him what documentary to see. That’s probably not how I’ll approach things to come.

What is the tone like on set between scenes? Can you really become friends with someone like John Hawkes without upsetting the atmosphere?
Yeah, absolutely. He and I both approached the film in that way and so did everyone else on set. We never continued our characters between scenes. Obviously, there were times where I wouldn’t really want to talk to him five minutes leading up to a scene that’s really difficult between the two of us. But at the same time I have to find a lot of comfort in his character. I have to fall in love with his character in a way. So, there was a balance between how to prepare for each individual scene depending on what the content is.

The editing of the film is brilliant. As an actress did you have an idea of how the film was going to be pieced together? Was it difficult to imagine since you shot it in sequence?
You know, I did know exactly how it was going to be pieced together. A lot of the transitions were written in the script, but a lot of them were also found in the editing room. At one point when we started filming at the lake house I asked Sean, “In the script, this is the scene in the farmhouse that transitions into the scene we’re about to do. Do you want me to try to match anything?” He said, “Please don’t think about any of that. Think about each scene on its own.”  (Laughs) I was trying to piece it together myself. He was like, “That’s not your job. It’ll all come together in the editing room.” Just being present in each moment was really important. It gave Sean more leeway to edit.

A character like Martha, I think, is extremely rare in Hollywood today. I think that’s why you’ve probably heard a lot of comparisons between your performance and Jennifer Lawrence’s in Winter’s Bone. Do you feel the industry has lost sight of substantial roles for young women like yourself?
You know, I think just in history it’s been a give and take. Sometimes they’re there and sometimes they’re not. I do find there are lots of other things that are challenging besides someone like Martha. I mean, I guess so. I don’t know how to talk about it. I don’t know how to put words to it, I guess. But I do feel incredibly lucky. The truth is, if it does exist, an unknown actress isn’t usually allowed to play it. I got really lucky that Sean purposely wanted an unknown actress because otherwise any other production company would’ve needed a name so they could get the funding. I got very lucky on that end.

You can try to dissect the final scene of the film for days and still not come up with a concrete answer as to what exactly happens. Now, you don’t have to tell me what it is, but do you have your own theory about the end of the film?
I have my own theory about the last moments of the film, but I don’t have a theory about what happens afterwards. As an actor, and being a part of the movie behind the scenes, I’d rather leave the story as it is inside the context of the framing Sean provided.

This is only the second feature film of your career. Have you thought about what kinds of roles you’re going to be looking for after this? You don’t seem to strike me as an actress who would take on a role that really doesn’t speak to her.
Well, for me, I’m always looking for something to learn from. If it’s a character I think is exciting or challenging, or I could definitely learn from a script or situation, then I’ll approach it. I got to film a witty comedy with a romantic story this summer with [director/writer/actor] Josh Radnor (Liberal Arts) and I wanted to do that so badly because I wanted to explore what it’s like to do that on screen. (Laughs) To me the most challenging thing is a true comedy. I’m frightened of that. Maybe at some point I’d want to do that, but not sometime soon because it really freaks me out.

So, you don’t think you’re funny?

I don’t think so. Well, I don’t know the rhythm of having to make dialogue funny when it’s supposed to come off funny. Maybe I say funny things because people think I act like a grandmother and have weird dance moves. (Laughs) But that’s really where it ends