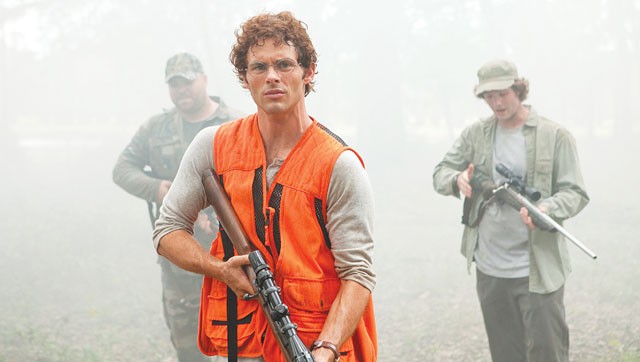 Times have changed since the release of Sam Peckinpah’s Straw Dogs in 1971. “Bloody Sam,” known for The Wild Bunch and other über-violent films — at least by the standards of the day — claimed in his autobiography, If They Move… Kill ‘Em!, that at the first Straw Dogs preview approximately one-third of the audience booked it before the credits rolled. Even Roger Ebert thought Peckinpah’d crossed a line.

In that original big-screen adaptation of Gordon Williams’ The Seige of Trencher’s Farm, Dustin Hoffman played David Sumner, a mild mathematician who, with his waif-y wife Amy Sumner, moves to the pastoral English countryside of his spouse’s youth, where they are terrorized by the burly, hick-ish locals — including an ex-boyfriend of Amy’s. Despite David’s impotent efforts to fit in with the riffraff, viler and viler incidents befall the couple. The family feline meets a terrible fate. Mrs. Sumner is violated in one of the most uncomfortably and ambiguously eroticized scenes ever put on film. At last, David realizes his “manhood” through a massacre.

The first Straw Dogs is a well-made but distressing film to watch, in great part because of its thesis: The meaning of manhood is savagery, to be a brute who will viciously defend his — or fight to acquire another’s — territory (including the chattel some call “women”).

Forty years later, erstwhile film critic turned screenwriter-director Rod Lurie has taken up the tale, flown it across the pond, and dropped Straw Dogs squarely in Blackwater, Miss., among some real rednecks. But why remake it at all? In the age of Hanna Rosin’s Atlantic Monthly pronouncement of “The End of Men” and Sarah Palin’s Tea Party order to “man up,” Lurie could have pounced on some timely, juicy script-flippage. This could have been Amy’s movie.

Alas, it still belongs to David (James Marsden at his nerdiest), now a screenwriter whose most intense expenditure of physical energy is jumping rope. The sexual politics carry over, too — if Amy (Kate Bosworth) doesn’t want men to ogle her, David says, maybe she ought not ask for it with her choice of apparel. The complication of possible pleasure is extricated from her rape, which occurs while David hunts CGI deer, trying to ingratiate himself with the crew of former high school football stars who make up this film’s baddies. Lurie doesn’t stand down from Peckinpah-grade bloodshed in the climactic final scene, either. Funny thing is, Ebert liked it this time around.