There are only so many gifts you can unwrap and tamales you can scarf during the holidays. Plus, the Spurs don’t even play a game on Christmas. What are you supposed to do with all that extra time besides argue with your idiot cousin about the impeachment inquiry? The movie theater looks like a solid option.

This year, San Antonians get to choose from seven new films that will hit the big screen — and one that will debut on Netflix — between December 20 and Christmas Day. Of those, the Current has reviewed six. Only Star Wars: Rise of the Skywalker and Cats weren’t screened in time for local critics.

That said, how hard do you think it would be to sneak some pan dulce and Abuelita chocolate into the theater under a big winter coat?

Here is a look at all the movies opening locally over the next week:

Lionsgate
For the second time this year, Hollywood is dragging late Fox News CEO Roger Ailes through the meat grinder in compelling fashion, this time for the big screen in Bombshell. Showtime got its claws on Ailes first when they told the tawdry tale of his history of sexual harassment at the cable channel in the mini-series The Loudest Voice. Like the Showtime project, Bombshell also makes former Fox News anchor Gretchen Carlson (Nicole Kidman) a major part of its narrative but gives most of its screen time to the story of former host Megyn Kelly (Charlize Theron in an Oscar-worthy performance) during the cable network’s 2015 full embrace of then-Presidential hopeful Donald Trump. Directed by Jay Roach (Game Change), the ensemble cast of Kidman, Theron, John Lithgow as Ailes and Margot Robbie as a fictional Fox News employee in search of fame is the real reason to tune in. Bombshell opens exclusively at the Santikos Bijou Cinema Bistro December 20.

Fox Searchlight Pictures
For some, three-time Oscar-nominated writer and director Terrence Malick is an acquired taste. The detailed cinematic and visual art he’s created during his career ranges from annoyingly pretentious to breathtaking and visionary. For those who aren’t familiar with Malick’s work, A Hidden Life, his longest film at 174 minutes, is probably not the best initiation. Returning admirers, however, will find the combination of his meditative storytelling approach, emotional intimacy and elegant wide shots as an extension of the philosophically heavy themes he’s explored in the past. In Hidden Life, Malick examines the life of Franz Jägerstätter (August Diehl), an Austrian farmer and conscientious objector who refused to pledge allegiance to Adolf Hitler and fight for the Nazis in World War II. It’s a powerful and poetic tale of martyrdom and easily Malik’s best since his 2011 masterpiece Tree of Life. Hidden Life opens exclusively at the Santikos Bijou Cinema Bistro December 20. 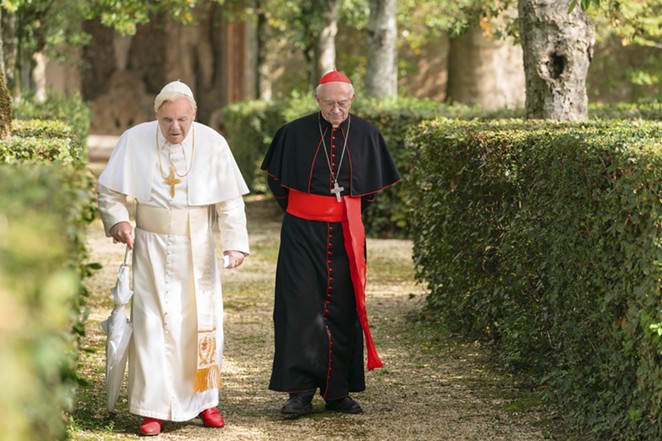 Netflix
Witnessing a pair of veteran actors like Jonathan Pryce and Anthony Hopkins exchange dialogue during scenes where they’re the only two on the screen is nothing short of brilliant. Directed by Fernando Meirelles (City of God), The Two Popes goes behind the Vatican walls to tell the story of Pope Benedict’s (Hopkins) unexpected retirement in 2013, followed by his urging for Argentine cardinal Jorge Mario Bergoglio (Pryce), later known as Pope Francis, to succeed him. The transition came despite the pair’s theological differences and the fact that Bergoglio himself planned to retire. Don’t worry about having to sit through a two-hour catechism class. The Two Popes isn’t overtly religious or preachy. Meirelles and screenwriter Anthony McCarten (The Theory of Everything) keep things uncomplicated and, at times, humorous as the two men of the cloth plan for the future of the troubled Catholic Church. The Two Popes debuts on Netflix December 20.

Columbia Pictures
Filmmaker Greta Gerwig follows up her 2017 debut feature and critical darling Lady Bird with Little Women, a respectable but too-often muddled retelling of the 19th century novel by author Louisa May Alcott. Although Alcott’s book has been adapted as a film seven times over the past century, Gerwig should be commended for her own unique and contemporary take. The film is still set during the Civil War era, but Gerwig’s four main characters —the March sisters (Saoirse Ronan, Emma Watson, Florence Pugh and Eliza Scanlen) — feel reenergized and empowered with a modern sophistication not featured in past projects. As charming as the March sisters are, however, Little Women gets tied up with Gerwig’s nonlinear screenplay. The overall narrative suffers because its structure becomes unnecessarily convoluted and messy. Still, Gerwig is able to capture the essence of the classic literature and give it some extra feminist flare. Little Women opens nationwide December 25. 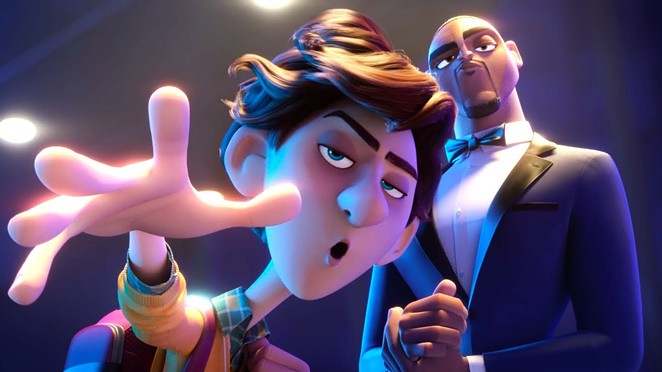 Twentieth Century Fox
As the only animated film opening during Christmas, Spies in Disguise has landed a prime holiday slot for families with elementary school-age kids who don’t plan on watching The Rise of Skywalker more than once. It’s unfortunate that the spy story featuring the voices of Will Smith and Tom Holland isn’t more inspired and creative. Spies in Disguise would be a lot more fun if its screenwriters realized that the hijinks between a young, genius inventor and a secret agent would have worked just fine without having its coolest character transform into a lame, talking pigeon for an hour. Spies in Disguise opens nationwide December 25.

A24
There is nothing delicate about the cinematic style of filmmaking brothers Benny and Josh Safdie, who broke out as directors with their tightly wound 2017 indie crime thriller Good Time. The Safdies deliver another shot of adrenaline straight to the heart with Uncut Gems, the story of hapless New York City jeweler Howard Ratner (Adam Sandler) with a gambling problem who is in debt up to his goatee to some shady characters. Howard thinks he’s scored big when he gets his hands on an uncut black opal from Ethiopia, but when he lends the stone to NBA star Kevin Garnett then loses track of it, Howard’s fate rests on how well he can talk himself out of a series of dangerous situations. Uncut Gems marks Sandler’s greatest performance since his role in Paul Thomas Anderson’s 2002 dark romantic dramedy Punch-Drunk Love. It also proves the Safdies are a serious new voice in the industry. Uncut Gems opens nationwide December 25.

Star Wars: The Rise of Skywalker