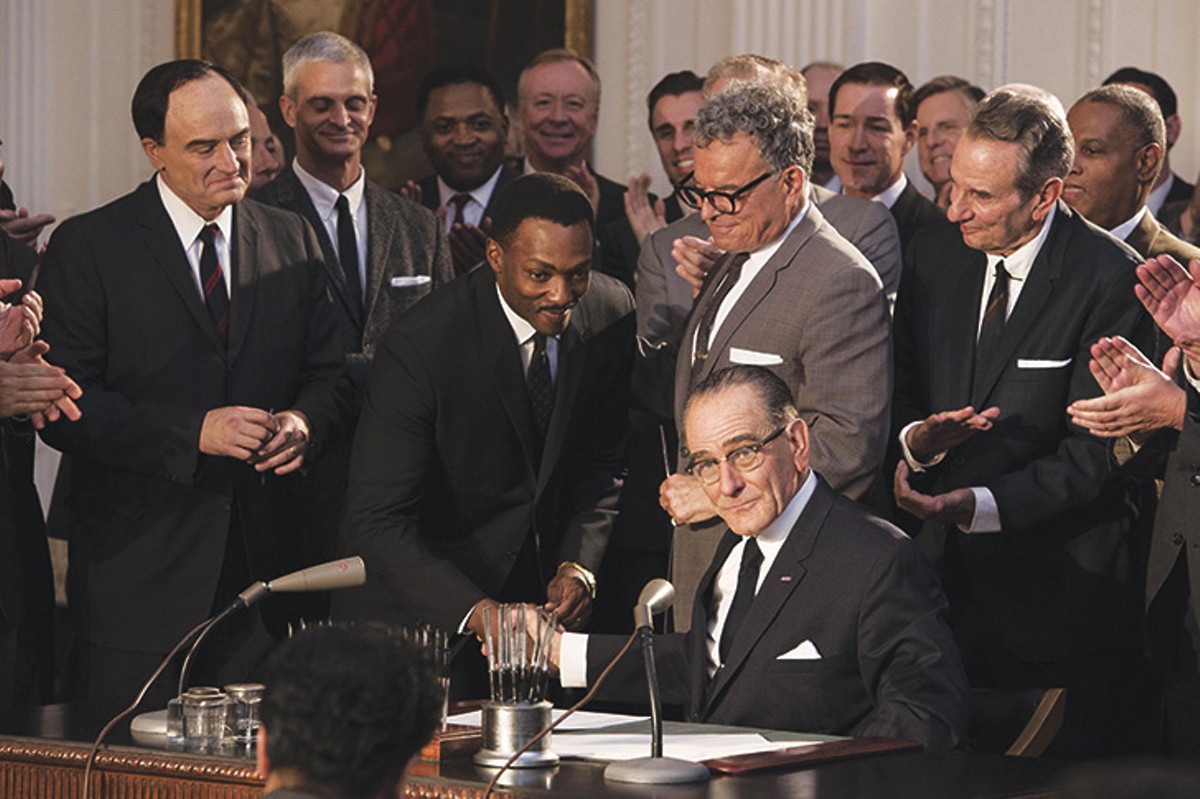 Photo By Hilary Bronwyn Gayle
All The Way will premiere on HBO Saturday, May 21 at 8 p.m.

All The Way, starring Bryan Cranston as the embattled 36th commander-in-chief Lyndon Baines Johnson, is, at its core, a story of inheritance. A dramatic documentation of Johnson's ascension to the presidency while the country tears itself apart over the South's legacy of Jim Crow laws. Johnson also inherits a country whose black citizens are subject to discrimination, segregation and terrorism, bequeathed second-class citizenship at birth. He inherits an escalating war for sovereignty in Southeast Asia, a war that would further divide the country along generational, moral, social, economic and political lines.

Directed by Jay Roach and based on the Robert Schenkkan play of the same name, HBO's All The Way affords not only Cranston a fine opportunity to display his prodigious acting chops (and some state-of-the-art facial prosthetics), but a sincere depiction of two men's struggle with the fulfillment of their dreams.

Dr. Martin Luther King, Jr. (Anthony Mackie) is this second man. Mackie's portrayal of King is paramount to the film in that the values and goals, motives and means of these two central figures, Johnson, a career politician, and King, a southern preacher fighting for equality, are illustrated, weighed and considered to great extent. One man is fighting from his guts, head and heart, and the other is mired in the egotistical struggle, not just for power but the righteous brandishing of it — caught up in his own talking head, if you will.

In affirmation of the old adage about politics making for strange bedfellows, it is the inherited prejudice of Dixiecrats like Georgia's Democratic senator and Johnson's "Uncle Dick" Richard Russell, Jr. (Frank Langella) that makes them the flipside to MLK, his Southern Christian Leadership Conference and the folks fighting for a nation of equity and equality. Russell, his compatriots and all that he stands for are diametrically opposed to King and his more radical allies Stokely Carmichael and Robert Moses. Johnson, however, is balanced precariously on the edge of that coin; both sides pressing in on him, leaving no room for a man with a conscience to exercise it and still maintain his prestigious post as president. Johnson's greatest battle is maintaining not just the nation's peace and his peace of mind, but, most importantly to himself, the privilege he so desires and equally loathes as the most observed and scapegoated man in politics. "People think that I want great power. But, I want great solace ... That's all I want," states Cranston as the conflicted Texan.

However, where LBJ is interested in solace and tranquility for himself, MLK is interested in solace and tranquility for an entire people. And where LBJ is painted as a moral cavalier, fighting not just for what's right but for the soul of America's white population, he's also positioned as the lynchpin that holds the entire American political process together, the same one holding back its black citizens.

If LBJ would have refused the mechanics of politics altogether, going with his heart fully, he would have avoided the stress and bitter conflict that resulted in his own dismissal from the 1968 presidential race. Had he, like King or Russell, been fighting for his principles alone rather than perpetuating his stay in the White House he would've been much more at ease in the Oval Office. He also may have never passed the Civil Rights Act of 1964 or the Voting Rights Act of 1965.

As for the potential of All The Way to alter the public's perception of its subjects, Paul Stekler, founder of the Center for Politics and Governance at the University of Texas at Austin's LBJ School of Public Affairs and department chair of UT's Radio-Television-Film program, recently told the San Antonio Current, "I'm not sure how much Johnson's image, one way or the other, is affected by any of these things. I don't know how much this stuff affects popular culture."

This sentiment was echoed by his colleague, Victoria DeFrancesco Soto of the UT Austin Department of Government: "I do think that there has been a growth in interest in political TV, small screen, big screen ... The people who are flat-out not interested in politics, they might watch House of Cards, but they're not going to be like 'Oh! Well, I need to vote or I need to get into politics!' If anything, I think it might make them a little more apathetic."

Is that apathy part of our national inheritance? The result of years of struggle for what's "right and true?" If so, it's one we should greatly consider exorcising, if we could just muster the courage to care — all the way.