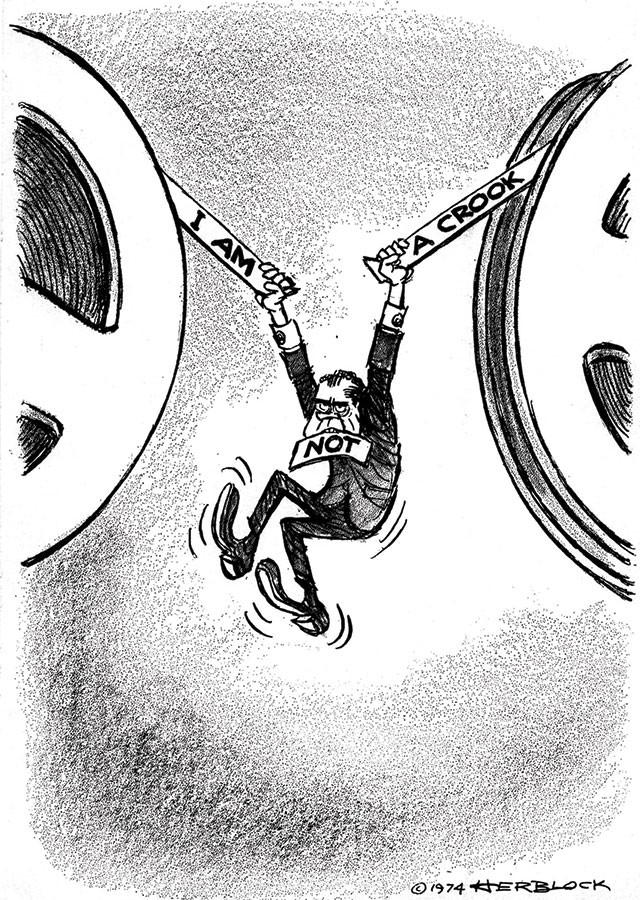 “In opposing corruption, the political cartoon has always served as a special prod, a reminder to public servants that they are, after all… public servants.” —Herblock

For 55 years, Herblock (born Herbert L. Block) was a household name for the way he nailed down American and world politics and social upheavals through his acclaimed political cartoons for the Washington Post. Herblock: The Black & The White, the 95-minute documentary premiering Monday on HBO and directed by Emmy winner Michael Stevens (Thurgood) does justice to the Pulitzer prize winner who, as a child, started drawing the WWI –era German Kaiser Wilhelm on the sidewalk because, “I wanted people to walk over him.”

“There were many [Washington, D.C.] breakfasts that were spoiled because of Herblock,” said award- winning columnist Jim Hoagland, echoing Ted Koppel’s comments about no one wanting to become Herblock’s target.

“He was going to nail your hide to the wall,” said Koppel, while Tom Brokaw added, “Sometimes you’d open up the Washington Post and it’d be like a punch in the face.”

Herblock saw the evil of Nazism early on and began making fun of the Führer at age 20. He was also an average Republican and a patriot of the best kind, the kind who appreciated goodness no matter where it came from. Although he never lacked work during the Depression, once he saw Franklin

Delano Roosevelt was “doing something” about it he became, “for lack of a better word, more liberal.”

In fact, he followed no one and feared no one; not the Post, not the White House or the oil companies, and certainly not the politicians. At a time when major cities had three or four newspapers, his cartoons were second to none and he won three Pulitzer prizes, not counting the fourth one he shared with the Post in relation with the Watergate scandal.

Out of the many top talking heads featured in the film, it is no surprise than one of Herblock’s most fervent admirers is Jon Stewart, the host of The Daily Show. Stewart, like Herblock with his cartoons, turned his satirical show into one of the most respected political voices in the nation, while conventional news media is increasingly viewed with skepticism.

“Herblock is one of the touchstones … of 20th century satire,” said Stewart in the film. “The crazy thing is to look at his work from the Depression and his work in the ’90s and see the consistency of his eye, his ability to knock down powerful forces and to bring up those that needed it.”

He was funny, he was relevant and he could draw.

“Looking at his graphic line,” said The New Yorker cartoon editor Bob Mankoff, “we were going, ‘This is someone who knows what he’s doing!’ And he did.”

Herblock: The Black & The White