Isle of Dogs is a Deadpan, Whimsical Animation Wes Anderson Fans will Lap Up

Looking back at filmmaker Wes Anderson’s past projects, one could argue the writer/director hasn’t been kind to man’s best friend.

In 2001’s The Royal Tenenbaums, a wild-eyed Owen Wilson drives his Austin-Healey off the road and runs over the family’s beagle Buckley. Seemingly unaffected, the Tenenbaums replace the pet in a matter of minutes with a firefighter’s Dalmatian. In 2012’s Moonrise Kingdom, Anderson writes in a scene where the young protagonist’s fox terrier Snoopy gets shot in the neck with an arrow. (“Was he a good dog? Who’s to say?”)

With all the canine casualties, it’s no wonder The New Yorker wrote an article a few years ago asking, “Does Wes Anderson Hate Dogs?” Note 1: The death of these dogs has no bearing on the actual story. Both would still be great films if he had let the dogs live. Note 2: He lets Willem Dafoe kill a cat in The Grand Budapest Hotel, so go figure. It’s a question Anderson puts to rest with Isle of Dogs, the second stop-motion animated feature of his career, after 2009’s fanciful Fantastic Mr. Fox.

Anderson undoubtedly matches his first outing in the genre with Isle of Dogs, a deadpan, dystopian adventure starring one of the most diverse cast of four-legged, animated characters since the Disney classic Lady and the Tramp. Its whimsical nature, of course, is unmistakably Anderson, so if he’s not your cup of Darjeeling tea, this won’t be either. However, fans of his idiosyncratic work will enjoy the wonderful world of wagging tails he has created with such exhaustive detail. It’s noteworthy, too, that Isle of Dogs is Anderson’s most politically-themed picture to date, although one could argue that classism and fascism are covered effectively in Rushmore and Budapest.

In Isle of Dogs, the dogs of Japan’s fictional Megasaki City are suffering from dog flu and thusly banished to an island covered in trash, so the disease won’t spread to their human masters. The first of dog exiled is Spots (Liev Schreiber), the official guard dog of the city’s sinister Mayor Kobayashi (Kunichi Nomura) and pet to Kobayashi’s 12-year-old orphaned nephew Atari (Koyu Rankin). Committed to bringing Spots home, Atari hijacks a small plane and crash-lands it on Trash Island where he is rescued by a group of deported dogs who argue about whether they should help the boy find his pup. 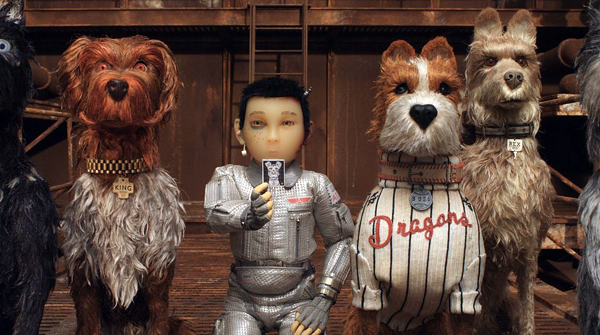 For his pack of alpha-male mongrels, Anderson casts his usual, talented suspects — Edward Norton as Rex, Bob Balaban as King, Bill Murray as Boss, Jeff Goldblum as Duke, and newcomer to the Anderson roster, Bryan Cranston as Chief, a stray and de facto leader who reluctantly goes on the Saving Private Ryan-esque journey even though he knows it will probably mean their lives. On their way, they meet Nutmeg (Scarlett Johansson), a former show dog whose master Tracy Walker (Greta Gerwig) heads a group of young activists to fight against the “dog-hating thugs” spouting political propaganda and trying to conceal the creation of a cure for dog flu.

As in all of Anderson’s films, the soft-spoken and dryly sarcastic comedy is not really for moviegoers with a broad sense of humor or for the narrow base of Anderson naysayers who think his distinctive style only appeals to pretentious hipster doofuses. Anderson does what he does and does it incredibly well. Part of that, obviously, is the attention he pays to every single frame of his visual composition. Not only is the handmade artistry meticulous across the board, but Anderson’s eye for choreographed randomness is second to none. Even the animated fleas that scurry across a dog’s fur are impressive. Add another award-worthy score by Alexandre Desplat and some bold decisions by Anderson when it comes to translating the Japanese language throughout the film, and Isle of Dogs is something truly special.

While it has, for whatever reason, become sort of cool to jab Anderson for his eccentric directorial choices (there are plenty of parodies online that poke fun of him and his films), it’s not something admirers should worry about, especially since even cynics would say he’s at least consistent. If that’s something everyone can agree on, those on the right side of cinematic history should add Isle of Dogs to Anderson’s growing catalog of cleverness and quirk.