Mexican star Tenoch Huerta will play a prominent role in the much-anticipated Black Panther sequel as Namor, the leader of an ancient underwater civilization with ties to Mesoamerica. 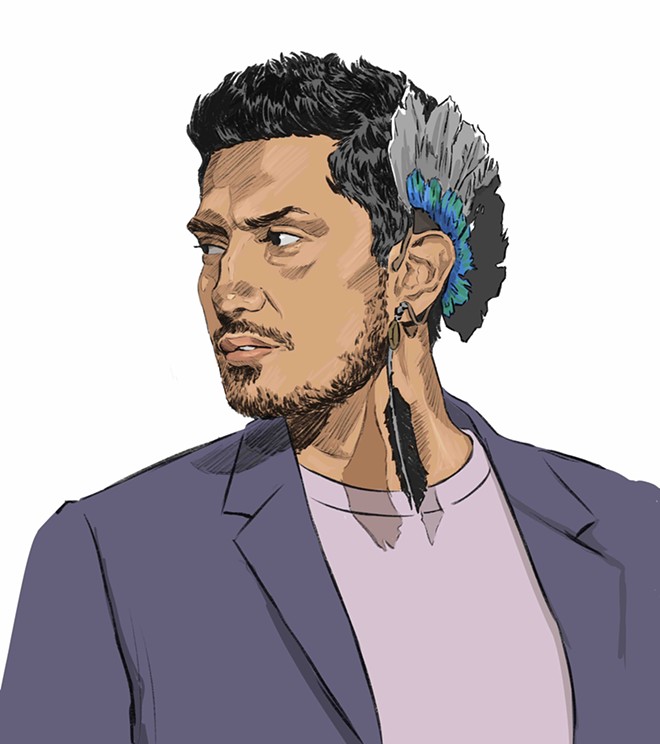 Courtesy of Terry Blas
A sketch of Tenoch Huerta as Namor by Terry Blas.

When Marvel approached Portland-based writer and illustrator Terry Blas to pitch an idea for a comic series based on Humberto Lopez, or Reptil, one of its lesser-known characters, Blas knew he could draw inspiration from his Mexican culture to create a story about a dinosaur-powered superhero.

Blas was already exploring his Latino identity through his work on several independent comics.

Blas also knew his contribution to Marvel would be one of the few examples of Latino representation for a major comic book company. He sensed there was an appetite for it. After all, it's one of the reasons Marvel started hiring Latinx acting talent including Xochitl Gomez (Doctor Strange and the Multiverse of Madness), Salma Hayek (Eternals) and Oscar Isaac (Moon Knight) to join the club in recent years and invited reggaeton superstar Bad Bunny (El Muerto) into its universe.

But before Bad Bunny makes his Marvel debut, the media empire will introduce fans to another Latino actor and character. This fall, Mexican star Tenoch Huerta (The Forever Purge) will play a prominent role in the much-anticipated sequel Black Panther: Wakanda Forever as Namor, the leader of an ancient underwater civilization with ties to Mesoamerica.

"This means more to La Raza than anyone will ever understand," one user tweeted.

"Namor being played by Mexican actor Tenoch Huerta ... is about to be the hardest shit Marvel has ever done," opined another.

Blas also wanted to express his gratitude to Marvel for creating a potentially iconic role around a character he recognized culturally. So, he sketched a portrait of Huerta from the stage at the San Diego Comic-Con last month, where the actor was introduced to attendees as Namor.

Later that week, Blas jumped on a Zoom call with the Current to talk about Latino representation in the Marvel Cinematic Universe.

What were your initial thoughts when you saw the Mesoamerican scenes in the trailer for Wakanda Forever?

It looked like an interesting story, especially with the inclusion of another group. I hope we get to see both groups realize that they're sort of in the same position and should understand each other. I'm really glad that they are both historically excluded groups that are getting this kind of representation.

What kind of impact do you think the inclusion of actor Tenoch Huerta will mean for Latino fans of Marvel movies?

I think it's great, especially because he's from Mexico. He has an indigenous ancestry. There isn't a lot of representation of that in American cinema. It's a lot easier to dream that you can be something if you can see it. To be able to see that representation is important. When we don't see ourselves represented in movies, TV shows and comic books, the message that we receive is that we don't exist. I think [casting Huerta] can only do great things for Latinos in the industry.

What can it do for the future of Latino characters in the Marvel Cinematic Universe? Can you see Reptil getting his own film or TV series?

Honestly, you never know. I'm sure that when Spider-Punk or Spider-Gwen was created, no one thought they would blow up, but look at how popular the Spider-Verse is now. I don't know what the chances are, but I never would have thought that a character like Reptil's cousin, who is a bruja (witch), would appear on the cover of a Marvel comic book, [Marvel's Voices: Comunidades].

How important is it for Latino audiences to support these characters?

Latinos make up a huge portion of Marvel's audience. On one hand, companies can say, "Well, we already have your money, why would we add more representation if you're already seeing our stuff?" I think the only way to combat that is to support the stories that represent our communities. That will show [Latinos] that they have even more buying power. Then, [studios] could potentially make more movies with diverse representation.

What's your message to Marvel purists who don't want to see a Mesoamerican Namor and want the movies to follow the original comics?

If you don't want to see anything change, you're going to have a hard time in this life. Things change all the time. I think that if you're a purist, then go read the comics. I mean, didn't we just have a multiverse movie? I'm all for a million different versions of different characters. Why wouldn't you want to include other communities and other people? Who wants to play with a kid who doesn't want to share his toys?

On that note, Warner Bros. recently shelved an almost-finished Batgirl movie with a Latina playing the title superhero. What are your thoughts on that shocking decision?

[Actress] Leslie Grace and the character of Batgirl deserve better. Other movies have been made and finished and gone directly to streaming services instead of the theater, so this tells me that there's something else going on. I don't know what we can do to combat things like that happening other than to support other Latinx writers and showrunners when they get put in positions of power. Watch their shows and tweet about them so they're successful and we can have more.