Overwriting doesn’t keep ‘Juno’ from being one million-dollar baby

Sometime in the near future, you’re going to be hearing about Diablo Cody. Perhaps in the coming months, perhaps before the year’s out. Or maybe it’s happened already, and your head is bobbing sagely as you read this, contentedly aware of things about which others may only speculate. If this last case is yours, please suffer me a bit of ineludible clarification:

A Diablo Cody is not a punk band, or a stiff drink of the sort that the proffering barkeep grandly sets aflame, or the grizzled and weatherbeaten protagonist of a graphic novel centered on infernal gunslingers. (One might be excused for supposing any and all, though.)

Invariably, instead, you will hear that Diablo Cody (A) is an ex-blogger who was noticed by a studio nabob and more-or-less summarily spirited off to Hollywood and a burgeoning screenwriting career; (B) is a former Minnesota phone-sex operator and on-again, off-again exotic dancer who began stripping on a lark, then returned to it after a promotion at her day job (ad-copy proofreader) left her nonplussed; (C) has written a staggeringly brilliant, impossibly hilarious, perfect-to-the-letter script, and said script has become the just-as-worthy teen-pregnancy film Juno.

I laughed harder and more satisfyingly at (much of) Juno and had more delirious fun watching it than I did just about any film of 2007 not named Hot Fuzz. But flawless it isn’t.

As gravid, mouthy, 16-year-old Juno MacGuff, Ellen Page (you likely know her either as Kitty Pryde from X-Men: The Last Stand or from Hard Candy — no judgment here) deadpans her way nimbly through a deliciously barbed but occasionally tricky script that challenges significantly more seasoned actors; Page, like her Juno, is an intrepid sparkplug of a young lady (“precocious” doesn’t begin to suffice), and tackles the most unwieldy mouthfuls of text with an aplomb and self-assuredness that somehow sees her — and us — through to the other side. These rough patches (too-fast, too-wordy dialogue that feels overwritten and heavy on tongues and ears) are a bit too frequent early on — they pop up most often (excluding an immoderate near-opening scene featuring Rainn Wilson) in rapid-fire exchanges between Juno and best girlfriend Leah (Oliva Thirlby). Yes, I understand that teenage girls have their own language. Yes, I know that that language is often arcane and stylized and habitually spoken at several million miles per hour. That doesn’t erase the fact that, at points, it chafes a bit and sounds artificial.

The good news: Aside from these relatively minor instances and a bit of overscoring, everything in Juno works wonderfully, sometimes sublimely. There’s a crack about a t-shirt gun that made me laugh perhaps louder and more unexpectedly than any other single line this year, and a number of its prime competitors come from Juno, as well. Several belong to Michael Cera’s unflaggingly real, gosh-darned adorable baby-papa Paulie Bleeker (his shared scenes with the phenomenal Page are the finest of the film), who nearly steals the whole sucker away from an uncommonly good cast. Much applause to Cody, director Reitman (Thank You for Smoking), and all: There are scuffs here and there, but Juno’s an unqualified winner. •

Another bun in the oven 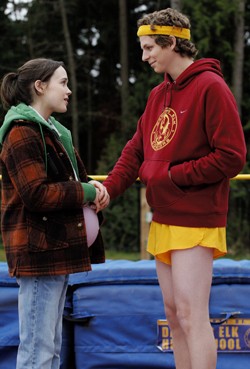 Thirteen years ago, Juno director Jason Reitman’s papa Ivan released a little prego-film of his own: Junior, starring none other than the governator … as a brilliant scientist who knocks himself up. Think that’s inconceivable? Emma-fucking-Thompson becomes his girlfriend. Yeah-huh, I know.

This was Daddy Reitman’s second outing with the Schwarzenegger-DeVito dynamic duo — the first was of course, Twins — and the fine pair was augmented with a lovely cast including Frank Langella (the baddie, natch), Christopher Meloni, and Aida Turturro.

Though not so elementally touching as Juno, Junior’s script by Kevin Wade and Chris Conrad manages to insightfully tackle gender identity as well as humor, setting up an Arnie-in-drag sequence, and proffering the classic DeVito line “Just ’cause your egg’s in some guy doesn’t make you the mother!”