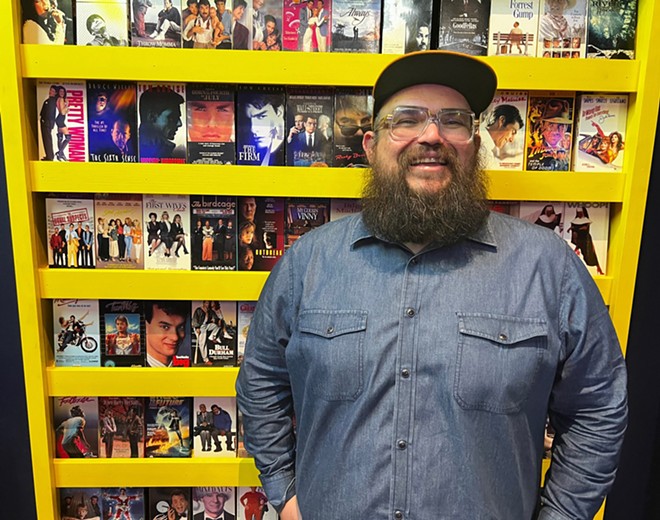 Kiko Martinez
Be Kind & Rewind owner Alex Amaro stands in front of a display of VHS covers inside the bar.

Mostly because his two older siblings would pop cassettes such as Killer Klowns from Outer Space into the family's VCR. Some of those memories have crept into the aesthetic of Amaro's new downtown bar Be Kind & Rewind, which opened Friday, Oct. 28. The nightspot's name refers to the request the now-defunct rental chain Blockbuster Video made to its customers when returning VHS movies.

Be Kind & Rewind, 115 Alamo Plaza, is designed with 1980s through 2000s pop culture as its theme, and there's a video wall featuring clips of movies from that era, including A Nightmare on Elm Street, Die Hard and Pee-wee's Big Adventure.

A section of the bar also displays vintage toys from Amaro's collection, including action figures from the movies Teenage Mutant Ninja Turtles, Beetlejuice, The Nightmare Before Christmas and The Exorcist. Is that the Xenomorph from Alien attacking Toy Story's Woody? It sure is.

At one of the entrances of Be Kind & Rewind, Amaro also displays dozens of original VHS covers from the films of his childhood. They include Teen Wolf, Big, Back to the Future, Footloose, Bull Durham and Indiana Jones and the Temple of Doom.

We caught up with Amaro last week to talk about his movie memories and his plans for movie-themed events.

What's your relationship like with movies of the 1980s?

I'm a first-generation Mexican American, so I watched a lot of movies with my mom and dad in Spanish. I'm a Halloween baby, so I remember my brother and sister, who were 10 years older than me, always watching scary shit. I remember one of the first movies I watched was Poltergeist. I've always gravitated towards horror movies.

Were you scared of the movies they'd show you?

I was scared! But I've always liked the genre. I remember watching Creepshow when I was little and loving it. It creeped me out.

Are there non-horror movies from the 1980s that you like?

I like the classics like The Breakfast Club. You know, doing research to put all this together, I was surprised at how many films that could be from either the '80s or '90s — movies from 1989 or 1991. For example, Look Who's Talking is an '80s movie. It was interesting to see how '80s and '90s movies all had their own style.

What kind of research did you do?

I really wanted to make sure the bar's aesthetic was right when I started tying in the '80s and '90s video culture. We watched a lot of movies. We started chiseling down which movies we wanted to feature on the menus, which are all designed to look like VHS tapes. Most of them are my favorites, like Scream. So, it was a fun research project but a lot of work, too. We really wanted to evoke those memories of people's favorite movies. I've seen a lot of people excited about the menu that has Jawbreaker on it.

Are you planning to do any movie-themed events here?

We are planning to do movie trivia nights on Mondays. We want to program that as soon as we can. I know trivia is big, so it'll be cool to tie it into our theme. I think it's going to be something unique, especially for downtown.

What about movie screenings?

You know, I'd like to do that. We have a lot of screens here and the sound system is great. I'm open to the idea, for sure. I think that would be a lot of fun.

I know you have a background in building escape rooms. Were there any adventure movies that you loved as a kid?

I loved Labyrinth. I loved Goonies. The whole adventure aspect of it was fun and watching all the friends helping each other out. We would watch that one over and over. Believe it or not, I really didn't get into Star Wars.

We're around the same age, and neither did I. I guess we lose some of our street cred since we're not Star Wars nerds.

Yeah, I missed it, and then it just never happened for me. I've seen the movies, but people are shocked that I'm not [a Star Wars nerd].