Paramount Pictures: Our Top Films of 2017

After all the blood, sweat and tears (thank Mama Coco for the latter) I experienced screening 221 movies this year, here is a look at my favorites.

Editor's Note: This article was updated Jan. 11, 2018 to include Phantom Thread, which the studio did not screen before deadline.

This masterfully paced, ironically titled, foreign-language family drama follows Manana Mkheidze (Ia Shugliashvili), a 52-year-old school teacher who is living uncomfortably with her elderly parents, husband and grown children in one house when she decides she would much rather live alone in her own apartment. In a move that is considered shameful in their Eurasian country of Georgia, some of Manana’s family push back but to no avail. Through simple and genuine storytelling and wonderfully chaotic scenes of domestic disputes and disorder, Manana is the heroine of her own adventure because she refuses to settle for the status quo and is courageous enough to ignore criticism and embrace change.

An unconventional crime thriller that feels like it was plucked straight from the 1980s, filmmaking duo the Safdie brothers pump the adrenaline up to full capacity as we watch small-time criminal Connie Nikas (Robert Pattinson) desperately try to get his mentally disabled brother Nick (Ben Safdie) out of prison before something bad happens to him. Set up almost like a modern-day version of John Steinbeck’s Of Mice and Men — if all the characters in the classic novel were tripping on acid — the Safdies know exactly what they are going for when it comes to style and tone and succeed enough to anticipate what’s next for them.

Dark comedy, sharp social satire and mainstream horror elements merge into the strange and smartly written first feature by filmmaker Jordan Peele, who drives his critique of cultural appropriation into a clever, anti-racism statement and offers a disturbing and nightmarish exploration of current race relations in America. Things get unnerving for Chris Washington (Daniel Kaluuya), a young, black college student, when his white girlfriend, Rose (Allison Williams), brings him home to meet her seemingly normal family. Call it Guess Who’s Coming to Say WTF at Dinner.

8. War for the Planet of the Apes (dir. Matt Reeves)

If 2014’s Dawn of the Planet of the Apes wasn’t evidence enough that director/writer Matt Reeves had produced something exceptional, this sequel should have you campaigning for him to get his hands on every action tentpole project for the foreseeable future. Once again, Andy Serkis’ motion-capture performance as ape leader Caesar is stunning as he leads the charge against the humans who are still hell-bent on destroying them, this time with vengeance as his main motivation. Visually gratifying and epic in scope, it’s a memorable conclusion to a brilliant, reimagined trilogy.

While there were a handful of well-made superhero movies this year that were, well, just plain ol’ fun — Guardians of the Galaxy: Vol. 2, Spider-Man: Homecoming and Thor: Ragnarok — the best comic-book-inspired offering this year — and maybe ever — was the weighty, somber, ultra-violent final chapter in the X-Men’s Wolverine saga (at least with actor Hugh Jackman wielding the retractable claws). Jackman says goodbye to the role that made him a star by delivering depth and grit the character has never displayed before. As Charles Xavier (Professor X), actor Patrick Stewart, too, expands on his longtime mutant role with vulnerability, while newcomer Dafne Keen blazes across the screen with visceral energy. A fascinating newspaper drama set in the early 1970s during the leaking of the Pentagon Papers, documents that proved the U.S. government was lying to the American public and Congress about the Vietnam War for years, director Steven Spielberg makes the newspaper industry come to life in a film that is necessary viewing for anyone concerned about how certain First Amendment rights seem to be viewed as optional by the current administration. Aside from its timeliness, Spielberg’s opus on the Freedom of the Press is also an effective narrative on female empowerment anchored by a contemplative performance by living legend Meryl Streep. Who else can make a scene where a decision has to be made over the telephone so transfixing?

Oscar-winning screenwriter Aaron Sorkin (The Social Network) makes his directorial debut from a script he adapted from the memoir of real-life main character Molly Bloom (Jessica Chastain), a high-stakes, underground “poker princess,” and her experiences running poker games for the world’s elite before she was busted by the FBI. Much like his other cinematic work, Sorkin’s sometimes-too-perfect dialogue springs from the page and from the mouths of his characters with spitfire sharpness, intellect, and wit. It’s especially true for Chastain who gives her best performance since 2015’s under-appreciated A Most Violent Year. Narration throughout an entire film can be a tough sell, but with Sorkin’s style, it’s easy to hang on to every word.

Pixar’s take on the traditional Mexican celebration Día de Muertos gives audiences a film that will become the standard-bearer of what a positive Latino experience can look like on the big screen for years to come. The story of Miguel Rivera (Anthony Gonzalez), a young, ambitious musician who crosses over to the Land of the Dead to find his purpose in life, is a beautiful, heartwarming and visually exceptional achievement about the appreciation of family, the acceptance of loss and the aspiration to become what you were born to be. From the vibrant and imaginative papel picado-inspired opening sequence to the extraordinarily moving final act, it’s a cinematic gift to Latinos worldwide and easily the best animated film of the year.

The fusion of blistering drama and dark comedy rises to the levels of Martin McDonaugh’s first feature film, 2008’s In Bruges. There’s no denying the intensity brimming from both genres, which injects the picture with a strong dose of anger, especially in Frances McDormand’s main character Mildred, a mother whose outrage incites her to pick a fight with local law enforcement for failing to find the man who raped and murdered her daughter. As Mildred, McDormand carries the film effortlessly through determination and a tinge of ruthlessness, although her supporting cast, which includes Sam Rockwell and Woody Harrelson, are worthy foils who are also more interesting because of their multilayered characterizations. At this point in his career, McDonaugh could become the third Coen brother if he wanted. 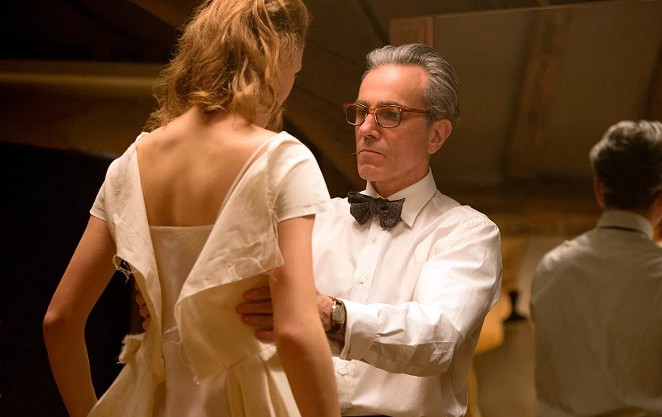 As elegant and stunning as the couture dresses three-time Oscar winner Daniel-Day Lewis’ character designs in the film, writer/director Paul Thomas Anderson’s period piece is a work of art. In what he is calling his final acting performance, Lewis stars as Reynolds Woodcock, a renowned and pedantic English dressmaker whose life is upended when he meets a young muse who is far more strong-willed than he anticipated. Anderson expands his exploration on relationship dynamics (he touches on it in The Master with Amy Adams and Philip Seymour Hoffman’s characters), to reveal a wickedly humorous newfound romance that is both suffocating and Machiavellian. Watching that play out for 130 glorious minutes with a remarkable score by Johnny Greenwood hovering above it is sensuous and sublime. Compassionately told through the eyes of a child, like in recent films Where the Wild Things Are and Beasts of the Southern Wild, the story of 6-year-old Moonee (a breakout performance by Brooklyn Prince) and her irresponsible mother (Bria Vinaite) living in an off-the-highway Orlando motel in the shadows of Disney World, is a captivating observational drama filled with moments of incredible sadness, wide-eyed innocence and pure joy. The insular environment director Sean Baker (Tangerine) has created for these marginalized characters to live in is extremely convincing and actor Willem Dafoe, who plays the motel’s kindhearted manager, gives the film its authentic core. Knowing the “Happiest Place on Earth” is a destination far from reality, despite its close proximity, makes the narrative all the more emotionally resonant, regardless of how one interprets the film’s final hopeful/heartbreaking moments.