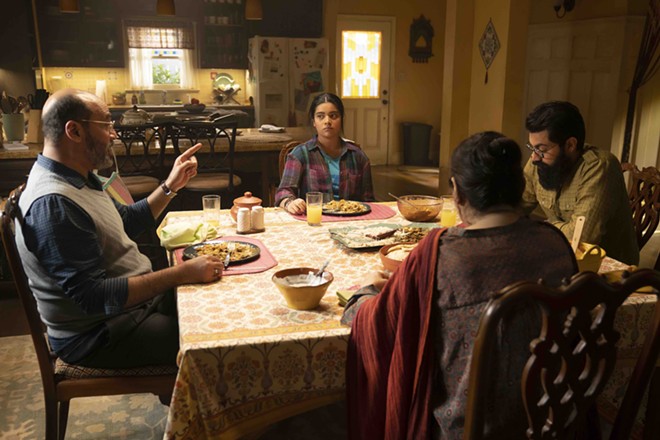 Before graduating from UTSA in 2011, Saagar Shaikh knew the business degree he was earning wouldn't factor into his future. The things the Pakistani American student was learning in his classes didn't excite him very much.

"I knew I didn't like what I was doing in school," Shaikh, 35, told the Current during a recent interview. "It was just so boring. I didn't give a shit about Statistics II. I thought, 'What could I do that I would really enjoy?' Then, I thought, 'What if I became an actor?'"

Today, the former Alamo City resident is part of the main cast of the newest Disney+ miniseries Ms. Marvel, which debuts Wednesday, June 8. Based on characters from Marvel Comics, the series follows Kamala Khan (Iman Vellani), a 16-year-old Muslim Pakistani American high school student and Captain Marvel fangirl, who gains her own superpowers when she puts on an antique bracelet that may have a history with her family.

Shaikh plays Aamir Khan, Kamala's supportive and loving older brother. In the first two episodes, audiences learn that Aamir is engaged to be married and that he once worked at Hot Topic and may have gone through a goth phase. Also, in planning his wedding, he has added Bon Jovi's song "Livin' on a Prayer" as one of the options for the newlyweds' first dance.

Ms. Marvel is the seventh TV series in the Marvel Cinematic Universe (MCU) produced by Marvel Studios. It comes after WandaVision, The Falcon and the Winter Soldier, Loki, What If...?, Hawkeye and Moon Knight.

"This project is so close to my heart," Shaikh said. "It's hard to represent an entire community, because even within the community there are subcommunities and individuals. We did our best to represent one family in one community. It was relatable. I know people just like the people we're trying to represent on the show. We had such a blast."

By the time Shaikh earned his business degree, he had already fallen in love with acting. Wondering what it would take to become an actor, he did what most people would do when they want to find information on something foreign to them. He looked it up on the Internet.

"I started Googling, 'How do I become an actor?' Shaikh said. "Oh, you need head shots. You need to find an agent. You need to get a reel together. You need to look for auditions."

Then, destiny stepped in.

Shaikh was at the point in college where he needed to earn internship hours, so he went to his academic advisor who gave him a list of places he could apply. He submitted the applications, but he really didn't care where he landed.

"I just saw them as check marks of things I needed to do," he said. "There was one company that had the word 'management' in it. I was like, 'I'm a business major, so I'll just do this one.' When I went in, there were all these head shots everywhere. I was like, 'Where am I?'"

As luck would have it, he'd landed at a local talent management company for actors. Not only did Shaikh land an internship, but he also found an agent who started sending him on auditions for local and regional TV commercials.

"I was like, 'The stars are aligning. This is wild,'" Shaikh said. "Two weeks ago, I just had an idea and now here I am. It was presented to me."

He added: "I believe in kismet. I believe in destiny. God has already written it all. We just hope for the best and prepare for the worst. If you want something, you must work for it. If I had only put in two years and then quit, I wouldn't be here. My destiny would be something else."

Born in Houston, Shaikh was a voracious reader of comic books as a kid — mostly X-Men. Since he spent the first 14 years of his life in that ultra-diverse city, Shaikh said he was never aware of the lack of representation in TV shows, movies and comics. In real life, when he looked around, he saw plenty of Asian, Latino and Black kids at his school.

That changed once his family moved to San Antonio his freshman year of high school. Shaikh first attended Clark High School then transferred to Marshall for the next three years. He graduated from Marshall in 2005.

"When I was a kid reading those comic books, it didn't occur to me that I didn't feel represented because I felt like I was surrounded by so much diversity," he said. "When I moved to San Antonio, we moved to the North Side, which is pretty white. I thought, 'Hey, I'm the only one at my school who looks like me.'" Then, I started noticing other things like TV, comics, movies. There was nobody like me."

Shaikh's interest in comics waned and he didn't think about them for 15 or more years. Eventually, he heard about the comic book Ms. Marvel, which made its debut in February 2014.

"I was like, 'There's a Pakistani superhero in the Marvel comic-verse?'" Shaikh said. "I thought the idea was amazing. But I wouldn't pick one off the shelf until a few years later."

By the time he learned about Ms. Marvel the comic book, Shaikh had already moved from San Antonio to Los Angeles to pursue an acting career. Relocating to Hollywood wasn't something Shaikh's parents approved of. They didn't want him to abandon his business degree for such an unreliable profession.

"My dad was so mad, especially when I moved to LA," he said. "He would call me and tell me that it wasn't too late, and that I could still get a normal job and buy a house and live a normal life. I told him, 'You've always told me to be the best at whatever I decide to do. To do that, I need to go somewhere else.'"

During his first eight years in Los Angeles, Shaikh racked up commercial work, starred in a few short films and did a web series called Unfair & Ugly. His co-star on that series, Kausar Mohammed, remembers him as "a hilarious and talented creative" with a unique point of view and sense of humor.

"[Saagar] has a knack of bringing people together and is truly a joy on any set or stage he works on," Mohammed told the Current. "I know anything he does, he does it exceptionally. It'll be so powerful to see the representation he authentically brings — as a Pakistani Muslim actor — to [Ms. Marvel]. I'm so excited to see him shine."

In late 2019, Shaikh shot a high-profile talent showcase for ABC in hopes the project would lead to more work. But when the COVID-19 pandemic was declared a national emergency in March 2020, Shaikh was certain his acting career was over. Productions shut down across Hollywood.

"I started feeling like I had wasted 10 years of my life," he said. "I was like, 'Get the hint. If it hasn't happened yet, it's probably not going to happen.' I'm not the type of person to fully quit anything, but I could have put it on the back burner."

Luckily, Shaikh decided not to raise the white flag. Instead, one of the next things he did was send in a taped audition for Ms. Marvel. To prepare, he went out and picked up the first 20 issues of the comic book and read through them in a day.

"I wanted to know as much about it as I possibly could," he said. "I was like, 'Dude, this is so cool!' There were so many deep cultural cuts within the comics that only a Pakistani household would get. There are so many references that are just for us. I really fell in love with the comic book and the characters."

A few weeks later, Shaikh got word that he had booked the role of Aamir. He shared tears with his mom and his wife when he found out. After years of rejections and turning down roles for stereotypical characters like "Terrorist No. 4" or "Cab Driver," Shaikh felt as if he had finally made it, joining the ranks of actors of color who are redefining Hollywood.

"I've been so happy to see where the industry has started to go," Shaikh said. "It's so nice to see people like me on screen, to go to Netflix and see that Bridgerton has a South Asian lead, to see what [comedian] Hasan Minhaj is doing or to see a series like Ramy. It's opening the doors for more of us to continue to thrive."

Now, with his new opportunity on Ms. Marvel, Shaikh wants to add his voice to the mix and prove to the industry that South Asians and Muslims are the best storytellers when it comes to conveying narratives about themselves and their cultures.

"We're the only ones who can write for us and represent for us," he said. "We know what we're talking about. There are so many stories out there that need to be seen and heard — and so many of us willing to tell them."