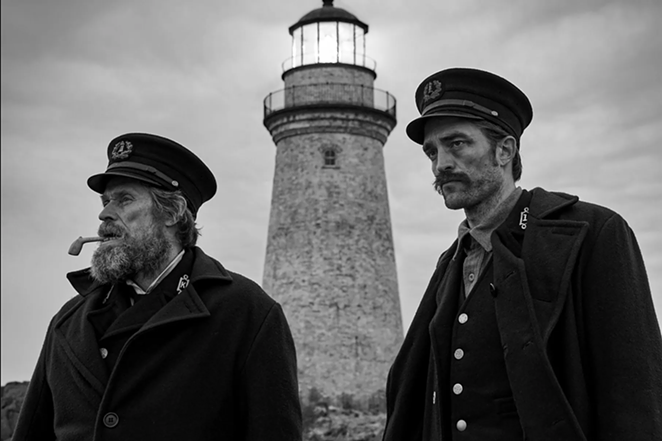 While a descent into madness is hardly a new concept in cinema, it takes a visionary writer and director to display a character’s declining mental capacity in a way that doesn’t simply turn them into another looney bin cliche. Recently, director Todd Phillips gave viewers a unique perspective on the DC Comics villain the Joker by reinventing his origin story and giving the film a 1970s Scorsesesque look and feel that made it all the more disturbing.

With The Lighthouse, writer-director Robert Eggers (The Witch) delivers a film that stands up to some of the most unsettling of the last decade in depicting the slow creep of mental illness. Those include The Babadook, Black Swan and Take Shelter. But there is an artistic quality to The Lighthouse’s surreal narrative that’s unmatched by anything that preceded it.

The film stars four-time Oscar nominee Willem Dafoe (At Eternity’s Gate) and the underrated Robert Pattinson (Good Time) as Thomas and Ephraim, a pair of grimy lighthouse keepers (“wickies”) stationed on a barren island in New England in the 1890s. Ephraim has been sent to help Tom tend to the post after his last worker apparently lost his mind.

We’re not sure, however, how much of what Tom says is true. His stories, which are told in a tone and with an articulation that can only be described as something straight from a Herman Melville novel, sound like tall tales. At first, Ephraim listens intently and does his work — menial tasks like pushing wheelbarrows of coal and emptying chamber pots. But gradually, he begins to resent Tom, especially when Tom forbids him from going into the lighthouse himself.

“The light is mine!” he growls at Ephraim, who has already begun to experience hallucinations of screeching mermaids and constricting squid tentacles.

No concrete plot steers The Lighthouse. Mostly, it’s a story about two men searching for a means to coexist in a place that seems designed for someone to die alone. Their discordant relationship is punctuated by a grim atmosphere created by cinematographer Jarin Blaschke (The Witch), who frames the rich black-and-white scenes into a series of harrowing and picturesque images.

In their separate roles, Dafoe and Pattinson deliver Oscar-worthy performances, but together the sum is even greater. The rhythmical screenplay by Eggers and his co-writer and brother Max is brilliant and shows the energy the duo put in researching the dialect of the era and location to form their own nightmarish folktale. Dafoe and Pattinson take full advantage of the perfectly constructed dialogue that spews from their mouths like seawater crashing on the shore.

The Lighthouse may not register with those turned off by the bizarre or in need of a more conventional storyline, but Eggers — like he did with his debut film The Witch — continues to redefine the horror genre and inject it with an arthouse flair.