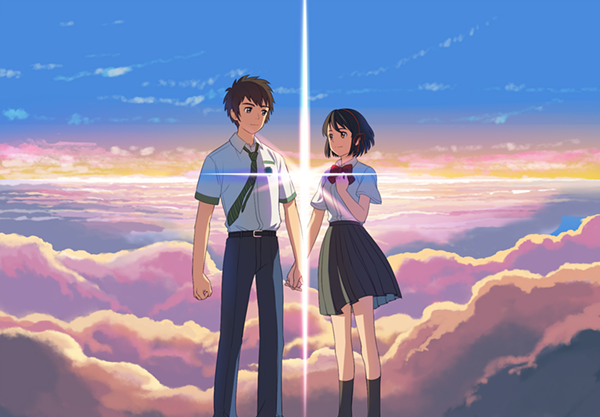 If you were thoroughly scouring critics’ lists of last year’s best movies, you may have run across Your Name popping up on a few — a very few, since this Japanese animated film only played in theaters in Los Angeles in December and wasn’t widely screened for critics elsewhere. This week, however, the Texas-based anime distributor Funimation brings this movie to San Antonio theaters in both English-subtitled and -dubbed versions. While I wouldn’t have placed this film on my Top 10 list last year, this box-office hit in Japan with an eye-catching premise and visuals deserves a look while it’s here, and not just from anime fans.

The plot begins with 16-year-old Mitsuha Miyamizu (voiced by Mone Kamishiraishi in the subtitled version and Stephanie Sheh in the dubbed one) waking up in her bed in a rural town called Itomori. This isn’t unusual, except that everyone she knows remarks on her weird behavior from the day before, none of which she can seem to remember. Mitsuha hates her strict life as the mayor’s daughter and wishes she were a handsome boy in Tokyo.

The thing is, she already is one. Every few nights during sleep, she switches bodies with Taki Tachibana (voiced by Ryûnosuke Kamiki and Michael Sinterniklaas), a similarly aged kid with an interest in architecture and a job at an Italian restaurant in the capital’s ultra-hip Shinjuku ward. No wonder the teens have trouble remembering who their friends are. Suddenly, Mitsuha becomes much better at basketball and can’t stop fondling her own breasts, and Taki is eating all the sweets Mitsuha wants and getting a date with that cute supervisor at work (voiced by Masami Nagasawa and Laura Post). Eventually, the teens figure out what’s happening and start leaving notes on each other’s phones.

If you’re looking for a Western-style exploration of gender fluidity, this might disappoint you. While Taki and Mitsuha do gain some perspectives on what it’s like on the other side of the sex divide, the key to the plot and the body-switching is a mystical confluence of events tied to a comet passing overhead and the Shinto shrine that Mitsuha’s family is taking care of. This is the first movie released in America by director Makoto Shinkai, who wrote this movie’s script based on his own novel. His story is structured as a closed loop much like the braided-cord bracelet that ties Mitsuha and Taki together, but it doesn’t match the emotional impact that old anime masters like Hayao Miyazaki and Isao Takahata regularly deliver. As the two kids try to avert an ecological disaster, the thriller-like conclusion feels like something pulled from a different film entirely.

Still, there’s no doubting this 44-year-old filmmaker’s talent and eye for beauty, as he renders both the rural landscapes and the bustling cityscapes in sun-dappled glory and does particularly well by an opening shot of a meteor shower over Itomori. The script has clever touches, too, like the play on the Japanese words for “twilight” and “who are you?” If Your Name isn’t quite as revolutionary as it seems to promise, it does herald an important and distinctive new voice that uses anime to address some grown-up — or at least partially grown-up — themes.