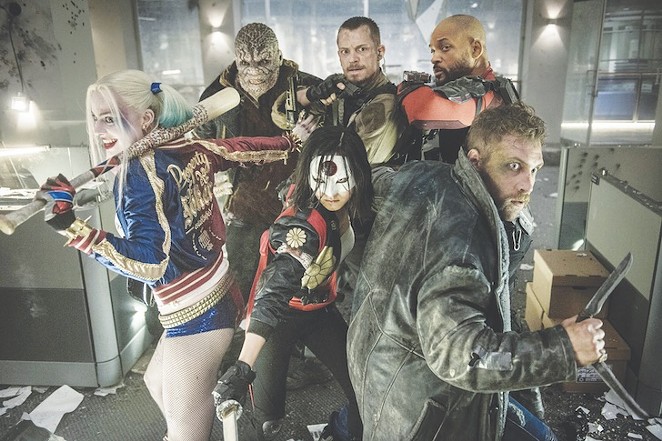 After the mind-numbing ineptitude of “Batman v. Superman: Dawn of Justice,” Warner Bros. desperately needs “Suicide Squad” to get its fledgling DC Comics Universe in line. It has to be well told, feature a legitimate villain, and inject a dash of humor into its gloomy proceedings so viewers can leave the theater with a well-earned, adrenaline-fueled smile. Most of all, it has to make people yearn for what’s next in the DC Comics universe.

It does none of the above.

However, it warrants a moderate recommendation because of Margot Robbie’s scene-stealing performance as Harley Quinn, and its fun pop soundtrack that nicely accentuates the action. Writer/director David Ayer (“Fury”) does a lot wrong here, but the soundtrack is just right.

The story follows the events of “BvS” in a tangential direction. Fearing someone with Superman’s abilities could attack Earth, shady government agent Amanda Waller (Viola Davis) enlists super villain “meta humans” to fight for the good guys in exchange for leniency with their prison sentences. They are: Deadshot (Will Smith), an assassin who longs to see his daughter; Robbie’s wonderfully unhinged Harley, who misses her beloved Joker (Jared Leto); Boomerang (Jai Courtney), a thief who doesn’t work well with others; Diablo (Jay Hernandez), who’s literally on fire; Killer Croc (Adewale Akinnuoye-Agbaje), who has skin issues; and Slipknot (Adam Beach), who can climb anything. Keeping an eye on the so-called “Suicide Squad” is Col. Rick Flagg (Joel Kinnaman), a real-deal military guy who doesn’t take kindly to miscreants, and his right-hand girl Katana (Karen Fukuhara), who carries the souls of her victims in her sword.

A villain surfaces in the form of Enchantress (Cara Delevingne), who takes over the body of Dr. June Moone. Flagg is in love with Dr. Moone, which is Ayer’s shoddy, half-hearted and unnecessary way of injecting emotion into the story. Enchantress, with the help of her brother, is a witch who I believe is somehow trying to take over the world, but to be honest her motivation is so horribly articulated that it’s hard to tell what she wanted. Essentially, she and her brother are here so the Suicide Squad can have someone to fight.

The best moments come early on as Batman (Ben Affleck) and The Flash (Ezra Miller) bust the arch criminals who will later comprise the Squad. These are amped-up, shadow and neon filled montages that show the baddies in action and then arrested, all to the tune of familiar pop songs. These sequences introduce main characters, set a colorful yet darkly serious tone and, most importantly, get us excited for what’s to come. Unfortunately, the second and third acts aren’t nearly as good, as the story often lacks clarity and cohesion.

That said, it’s Robbie, and to a lesser extent Leto, who steal the show. Robbie smartly uses her beauty as part of what makes Harley so dangerous, and when coupled with wild unpredictably, dark humor and ominous voices in her head, she’s a poison pill we can’t get enough of. Leto’s Joker is more unhinged and sociopathic than the late Heath Ledger’s in “The Dark Knight,” whose primary desire was to create chaos. Leto’s Joker wants chaos, mayhem and murder, and Leto plays him at just the right notes of “over the top” to make him a truly scary presence. No, Leto isn’t better than Ledger, but he’s quite good and deserves credit for making the character his own.

The action scenes are fine but non-stop and often shrouded in total darkness, which becomes tiresome. Nonetheless, “Suicide Squad” is just good enough to be worth watching on the big screen, with the caveat that Warner Bros. is clearly still trying to figure out how to get DC Comics movies right.