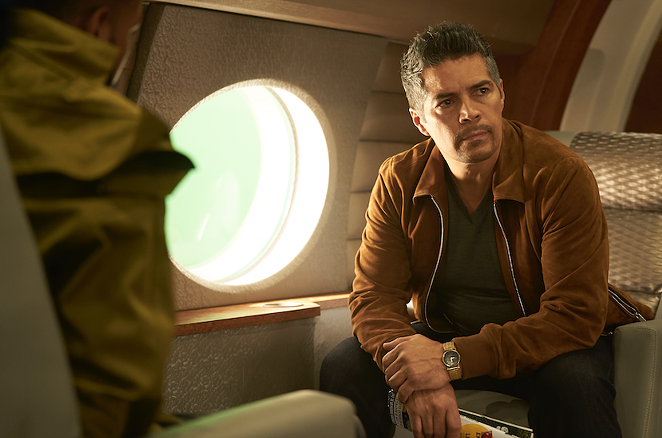 In Superfly, a remake of the 1972 Blaxploitation film Super Fly, actor Esai Morales (La Bamba) plays Adalberto González, the new leader of a Mexican drug cartel who supplies product to the mentor of the movie’s lead character Priest (Trevor Jackson). Morales said Adalberto “fancies himself as a cool, calm and collected version” of the previous cartel head.

“I’m not reinventing the wheel with this character,” Morales, 55, told the Current during an interview last week. “I’m providing the weight that is necessary in a story to know that the stakes are high.”

During our interview, Morales talked about the criticism that comes for Latino actors who choose to play drug cartel characters, why he thinks TV shows and movies about the cartel industry are currently popular and whether he’ll follow in the footsteps of his Superfly director, who goes by the moniker Director X, and change his name. We also talked about the U.S. administration’s delayed response to the tragedy Hurricane Maria brought to Puerto Rico late last year.

I’m sure you know about the criticism that comes any time a Latino actor plays a character in a drug cartel. Benecio del Toro is getting it for reprising his role in the Sicario sequel. The popular Netflix show Narcos gets criticized for its portrayal of Latinos. Do you think the criticism is valid?

Well, at one point I agreed with [the criticism]. But I realize now that drug dealers are kind of cool, not in real life, but the personas have been glorified and humanized. You realize that the biggest and the most powerful drug dealers on Earth are not Latino or black. Latinos and blacks did not invent the drug business. We’re the scapegoats. The biggest ones are corporate and governmental. Look at any one of the major, big pharma companies that have been fined for criminal activity.

Did you shoot your scenes in Mexico?

I don’t know if I can answer that, but no. But we made it look like Mexico.

I was wondering because last year one of the location scouts for Narcos was kidnapped and murdered. A location scout for the Sicario sequel was also kidnapped while in Mexico.

I just worked in Mexico in Tecate, which is about 45 minutes east of Tijuana. It was extremely safe. When you’re in big productions, maybe you draw attention. The film I was in was very small and it wasn’t about the drug industry.

What do you think it is about these kinds of TV shows and movies that have studios making so many of them recently? I mean, besides the Sicario sequel, Narcos and Superfly, there was Gringo earlier this year; Loving Pablo is coming out soon; Netflix’s Drug Lords, Kingpin, Cocaine Grandmother with Catherine Zeta Jones. Why so many?

I think it’s because of the success of shows like Narcos and others. We can really go back to Tony Montana in Scarface…

…which is getting remade.

Well, good luck. I hope it goes well, but it’s hard to touch that one. But I think [there are more cartel movies and TV shows because] it’s a trend – power, violence, extreme risk, danger. These are the elements of the classic gangster films. In the 1930s, you had James Cagney in Angels with Dirty Faces. Now, we have different personalities portraying the Pablo Escobars of the world. Our society is obsessed with power for better and for worse. The power of the cartels is immense, and it is mesmerizing and is something audiences, obviously, have not gotten tired of. Because that’s where the industry is going, people like Benecio and myself are not going to get left behind when there are good characters to portray. If anyone likes to say we’re extenuating stereotypes, I would say that I agree with you except we play more than that. We play presidents, matriarchs, billionaires, business leaders. I’ve played the chief of police of the Chicago PD on Criminal Minds. I would understand if [cartel members] were all we played, but right now it just happens to be in vogue. I would be more reluctant to play these characters if they were written terribly as just people to hate. So, calm down. I don’t want to be incarcerated into playing roles that only appease our community. I don’t want to be limited to that.

Is there any chance you could follow in your Superfly director’s steps and change your name to Actor Equis?

I like the name Director X. It has a revolutionary feel to it. Many years ago, I thought about changing my name to something more understandable or mainstream or Italian. But I decided that instead of changing my name, I wanted to change how people with my name were viewed. I wanted to try to broaden what it means to be a leading man or character actor by keeping Morales and Esai.

You’re originally from Puerto Rico. We now know that there were a lot more deaths in Puerto Rico because of Hurricane Maria than first reported by the U.S. government. What do you want to see this country do to help its citizens moving forward? It feels like they’ve been abandoned by this administration.

I’m very dismayed by the response, despite all the real efforts of a lot of great people that are there that gave their all. I know people that went to visit folks with FEMA. I know people with the Coast Guard and the National Guard and Army reserves over there. I went there quietly. I didn’t want to make it about me, but I wanted to assess the situation and figure out how I could help. It’s a complicated situation. I do believe the president could be more conscious of who Puerto Ricans are and had a quicker and more adequate response so the death toll would’ve been minimized. But I don’t think we can shame or insult this administration to doing what we believe is the right thing. I think we have to outclass our opponents and ignore opportunities to engage with them in ugly debates.