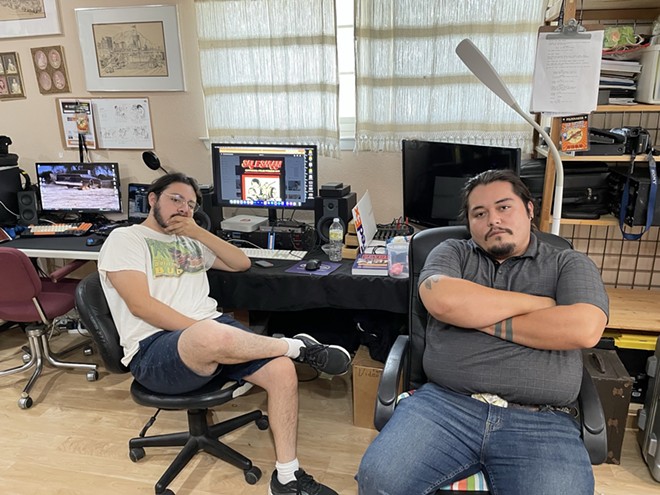 One of the surprise finds during the 2022 San Antonio Film Festival, which took place last month, wasn't a film at all but a pilot for an as-yet-unsold TV show, Salesman the Series.

The series follows conartist and watch salesman Lenny Finklestein, who inadvertently finds himself in the orbit of drug dealer Vincent Vaquero and is forced to help the bad guy move his cocaine.

While Salesman's mix of crime, humor and Latino culture seems like it could be tailor-made for the abundant streaming services now looking for fresh content, its origins predate the phenomenon.

Co-creator Amadeo Rivas, 22, has been working on the idea since childhood. First, he developed a stop-motion concept with the same title, then he extended it into a short film while attending Our Lady of the Lake University.

Rivas worked alongside childhood best friend Colby Guillory, 21, who serves as a co-writer and executive producer of the series. Another friend, James Ybarra, 27, stepped in to direct.

"I asked, 'Why don't we try and turn this into a legitimate television series? Let's try and do this right and try to get picked up by somebody and make this legit,'" Ybarra said. "I think it's a great idea to have a satirical crime show — like a funny version of Narcos, and I think we can be very successful at it too."

The pilot originally premiered in early April at Alamo City Studios, a downtown multi-functional facility that showcases projects from local filmmakers. Much of the audience was comprised of the cast's family and friends. Since then, it's been screened not just at the San Antonio Film Festival but the Paus Premieres Festival in London and the Lift-Off Filmmaker Sessions at Pinewood Studios in Los Angeles.

Since it's positioned as a comedy, the series allows the creators to pursue artistic choices that wouldn't work in a conventional crime show, including an animated sequence of in which Finklestein, the protagonist, floats while high on ecstasy — a segment Rivas edited himself.

Salesman also covers problems the Alamo City faced in the 1990s and that still linger today — human trafficking, gentrification and gang violence — while balancing the dark subject matter with humor. The show's blend of nostalgia, laughs and grit invites the viewer to see what's beautiful about San Antonio while not glossing over its many problems.

"I want people to look at Salesman and to know that's what San Antonio is and think about how we can make it better," Rivas said.

Much of Salesman's sense of nostalgia stems from the show's music, which includes the native sounds of '60s-era Chicano Soul bands such as the Royal Jesters and the Eptones along with Tejano from the '90s. The pilot takes place a month after Tejano superstar Selena's murder, which connects the series' music with the era's violent criminal activity.

"Our generation misses the '90s. The people who grew up in the '90s miss the '70s," Ybarra said of the nostalgia that runs through multiple generations of characters in Salesman. "It's not only a way to have multiple styles going on, but also a way to connect generations of people."

"It's very personal to me, and I think, San Antonio in general, because these are kids who came from nothing in San Antonio in the '60s and made some of the most beautiful music," he said. "It fits the themes we're going for, and Chicano soul music is the soul of San Antonio, so it deserves to be in Salesman."

Rivas said he wants the low-budget series' setting to serve as more than just a backdrop. He's eager to show off the talent of the city's underrecognized art community.

"As artists and filmmakers in San Antonio, we need to keep it among ourselves and build upon it ourselves, so we can tell our story without other people coming in from different cities and telling it for us," Ybarra added.

Ybarra and his partners are working to corral financial backing and land a deal to put Salesman on TV screens across the country. In the meantime, local fans have rallied behind the show, donating their time and talent, along with cars and props, for future episodes.

At the end of the day, Salesman is made for San Antonians by San Antonians, Rivas said. It's the outgrowth of stories passed down from families, and it shows the makers' pride in the place they're from.

"This is our love letter to San Antonio," Rivas said.