‘The Grandmaster:’ The Story of the Man Who Trained Bruce Lee 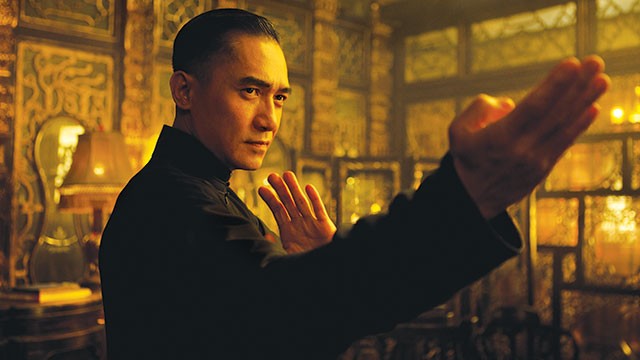 Resplendent visuals, chaotic narrative. Director Wong Kar Wai’s epic stab at the life of the legendary Yip Man (also spelled Ip Man), a martial-arts master who taught a young Bruce Lee the Wing-Chun style of kung-fu, was reported to initially run for more than four hours. From this rough cut, The Weinstein Company released a two-hour film that bears all the extravagant style the perfectionist Wong (My Blueberry Nights, Chungking Express) can muster but suffers from a sketchy biography that lurches along without rhythm or focus.

Mostly set between 1930 and 1952, The Grandmaster follows Yip Man’s years in Foshan, China, with the loss of his family and fortune during the second Sino-Japanese War and his eventual self-imposed exile to Hong Kong, where he became a renowned martial-arts teacher. Exploding onto the screen with the smiling Yip Man (Tony Leung Chiu Wai) facing off against an army of opponents in a rain-drenched alley at night, Wong uses a pre-credits confrontation to make clear that his approach to history will be elegiac and his fight sequences exaggerated, filled with the kind of gravity-defying wire work featured in wuxia films.

Gong Yutian (Wang Qingxiang), a martial arts master from the North, comes to Foshan to name impudent Ma San (Zhang Jin) as his heir to the region. When he encourages the South to name their own champion, his daughter Gong Er (Zhang Ziyi) worries that he will lose, for the very first time in his life, to Yip Man. Instead of a physical showdown, the two warriors engage in a (seemingly pointless) philosophical contest. Gong Yutian declares Yip Man the winner and later that night his daughter attempts to regain the family’s honor by squaring off against Yip Man in a stunning staircase fight in an elaborate brothel. Romantic yearning and jaw-dropping action flow together as Wong demonstrates why so many admire his work. The scene sets the stage for another of the director’s explorations of how time and fate are the tragic barriers between his characters and emotional fulfillment. In the director’s world, those who should be together are destined to drift apart and, then, to later meet to consider what might have been.

Unfortunately, what falls between the then and now is awkwardly episodic, relating a pedestrian biographical journey that belabors minor moments and glosses over pivotal events, and the film’s jarring edits end up baffling the narrative. Leung’s strangely all-knowing voice-over is clearly meant to provide contextual glue to the sprawling start-stop story, but ends up serving as a clunky and unenlightening attempt to connect the dots.

What remains to be savored are The Grandmaster’s sumptuous visuals and bravura fight sequences. Expertly orchestrating motion, texture and an endlessly vibrant spectrum of light and color, Wong composes an astounding visual symphony. He brings together his ravishing period costumes, dramatic natural elements and arresting settings with painterly precision and intricacy. A brutal fight between Gong Er and Ma San in the rain atop a train platform as locomotives race by is an iconic movie sequence that will linger in the memory and influence filmmakers to come.

Leung is a similarly gorgeous visual subject, filled with grace and nuance. It’s fair to say that Wong’s camera can’t seem to get enough of him. Whether it’s the angle of his smile, the movement of his hands or the focus in his eyes, the actor delivers a physical performance that offers profound glimpses into Yip Man’s internal landscape. As Gong Er, Zhang is equally ravishing, conveying more defiance, longing and sorrow in her eyes than any dialogue could convincingly explicate.

Taken together it’s almost enough to compensate for disastrous storytelling, but not quite. One can only hope that Wong, who took 14 years to complete Ashes Of Time, dedicates himself to releasing a more definitive version of The Grandmaster, honoring his breathtaking cinematography and gorgeously stylized action sequences with a biography that is equally engrossing.